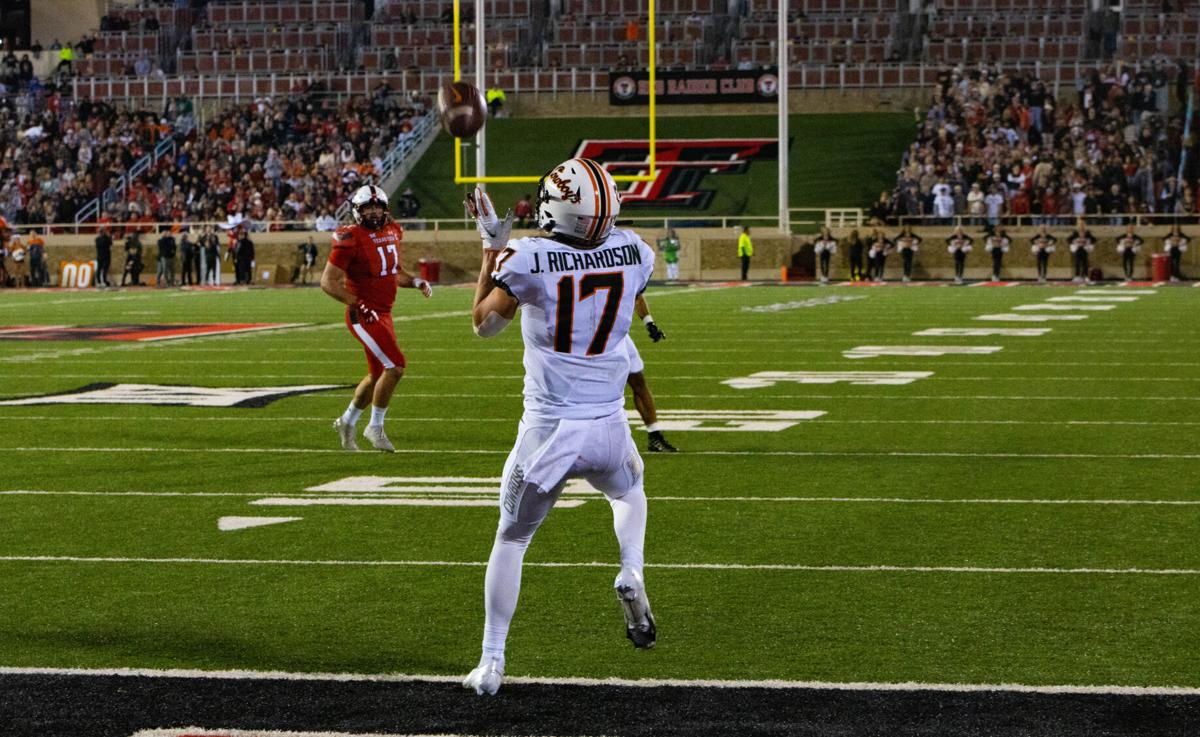 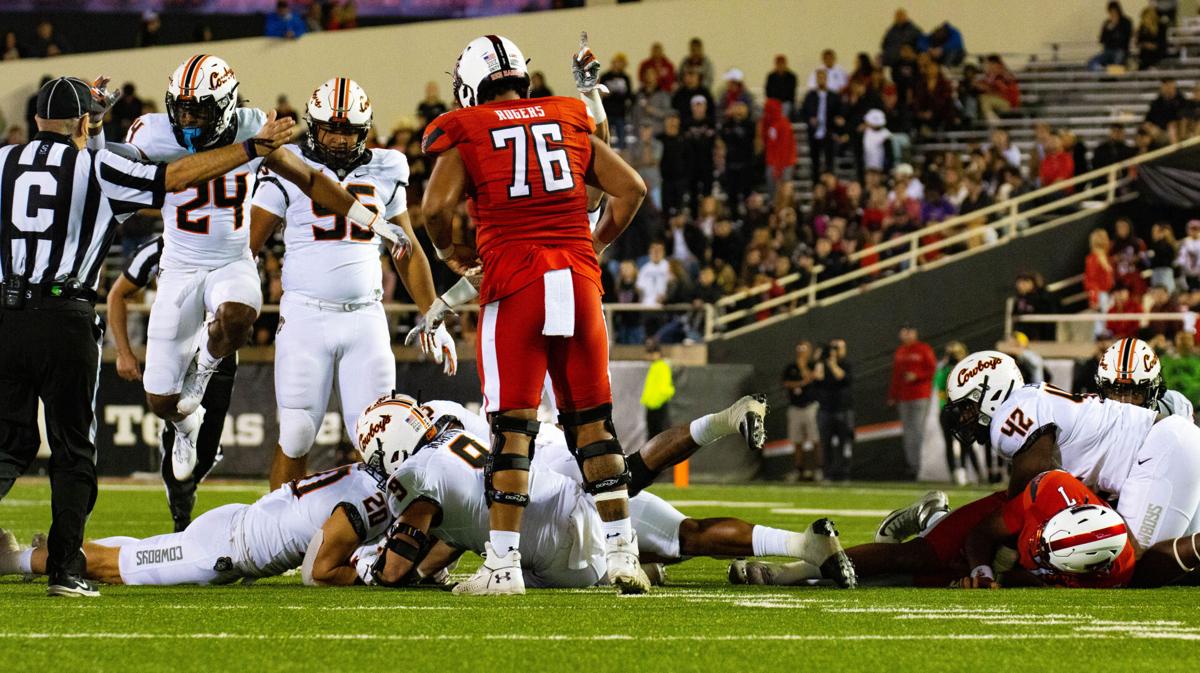 The conference championship race has narrowed down, and there are teams that have clinched a bowl game spot, are already eliminated or will be fighting for one next week.

From the first Texas Tech drive, they look outmatched.

The first Red Raiders drive lasted just over a minute, was three plays, and they only managed one yard out of it. From there, it was efficient Oklahoma State offense and lockdown defense.

The Red Raiders finished the game with only 108 total yards, their lowest total in 31 years, as the passing game was not pretty, but the run game was completely inexistent.

Quarterback Donovan Smith had a 31% completion rating, with 83 yards and a QBR of 13.3. Somehow though, the Red Raiders rushing attack was worse, as on 26 carries they only managed 25 yards.

Although the Cowboys offense didn’t put up an absurd number of points, they still had 427 total yards, and managed the game well, completely owning the time of possession game.

The Longhorns found themselves down 21-10 at halftime, mainly resulting from their poor offensive showing I the first half, as their first four drives resulted in punts. They came out in the second half more prepared though it seemed like, as they had taken out starting quarterback, Casey Thompson, for backup, Hudson Card. They then cut the West Virginia lead to four, and then after the Mountaineers scored again, they cut it back to five.

The Wildcats only got on the scoreboard in two of their nine offensive drives, with the rest resulting in punts, turnovers and a missed field goal. Even with these offensive struggles, running back, Deuce Vaughn, did his part, rushing for 128 yards and a touchdown on 11 carries.

Not only that, they couldn’t contain Baylor’s offense, even with an inexperienced quarterback entering the game, as they gave up 387 total yards.

Potentially the biggest blow though, is losing Skylar Thompson to a left leg injury, as had to get carted off the field from his last home game as a Wildcat.

Kansas has been involved in many close contests this year, and although they usually come out on the losing side of the, one can’t help but admit that they like to keep games interesting.

What this game boiled down to was the Jayhawks not being able to get the same kind of breaks they got in the first half on defense.

For example, after an early first quarter touchdown, the Jayhawk defense held the TCU offense to two punts, an interception and, a turnover on downs in their last four possessions of the half. This had the Jayhawks up at half, with a score of 14-7. However, the Horned Frogs would go on to score 4 out of their 5 offensive possessions in the second half, breaking down the Jayhawks defense.

The offense didn’t help much though, as due to their combined 39 yards on their first two drives of the second half, the Horned Frogs had the Jayhawk defense on the ropes, scoring 21 unanswered points. After this run, the Jayhawks were all but done it seemed like, until they started to mount a comeback. The Jayhawks ended up tying it up with just under five minutes remaining, but were defeated on a last second field goal.

When going down the game stats, it seems like Iowa State could have, or even should have won this game.

Although they forced a Caleb Williams interception, they gave up three turnovers of their own, as it ended up being too many empty possessions for the Cyclones to overcome.

Two of these turnovers were from Brock Purdy, one of which being an interception, and the other a fumble. The other turnover came from backup quarterback, Hunter Dekkers, who replaced Purdy for two possessions and threw an interception on one of them.

It was a tale of two halves for TCU.

After an early score the Horned Frogs couldn’t find their way offensively in the first half, as they ended the half with four empty possessions.

In the second half though, they came out rolling, led by their dominant rushing attack. The Horned Frogs ran for 326 yards on the day, as four different players had 50+ yards and a touchdown.

This ground and pound playstyle got the best of the Jayhawks, as the Horned Frogs had a 14 play, 67-yard drive to take up the last few minutes of the game, before hitting the game winning field goal.

The Mountaineers did so by having an all-around solid offensive showing, playing well in both the passing and rushing attack.

Quarterback, Jarret Doege, threw for 290 yards and three touchdowns, while running back, Leddie Brown, carried the ball 33 times for 158 yards and a touchdown.

The Mountaineers also dominated the time of possession battle, having the ball for more than 17 minutes than the Longhorns. To add onto that, they also won the turnover battle, as they played smart and had zero turnovers compared to the Longhorns one.

Big 12 and Sooner fans are used to this now– biting their nails at the end of the game, wondering if their team will hang on... which, to their credit, they usually do.

The Sooners did just that, holding off Iowa State in a game where they could never get their offense rolling, but the defense stepped up.

Caleb Williams had a lackluster passing performance, throwing 8 for 18 for 87 yards and a touchdown, with an interception to go along with it. However, his production on the ground made up for it, as he ran for 67 yards and a touchdown. Kennedy Brooks had a big day though, as he had 17 carries for 115 yards, averaging nearly seven yards a carry.

The Sooner defense did their part and more, forcing three Cyclones turnovers, which ended up being the difference in the game. The game-changing play was actually a fumble returned for a touchdown by the Sooners, as they punched the ball out of Brock Purdy’s hands, and Jalen Redmond took it to the house, putting the Sooners up 14-7 at halftime.

It wasn’t the cleanest performance by any means, but it got the job done.

For starters, when your starting quarterback (Gerry Bohanon), injures his right leg in the second quarter, that’s never a good sign. Then, when his backup (Blake Shapen), has only thrown three passes on the season, it’s somewhat unsettling, especially against a solid Kansas State program.

However, the Bears pulled through, as Shapen played well and helped manage the game towards a victory for his team. The offense was quite balanced for the Bears, as they had 213 passing yards, 137 of which were from Shapen, and 174 rushing yards, as three players ran for 40+.

The Bears defense also did their job at containing Skylar Thompson, as before the senior quarterback was carted off the field late in the game due to a left leg injury, he only had 158 yards and had less than a 50% completion percentage.

The Oklahoma State defense (once again), shows why they’re regarded as one of the top defenses in the nation. After shutting out Texas Tech, they’ve now held their last four opponents to a combined 23 points.

They held the Red Raiders finished the game with 108 total yards, nearly four times less than their total yards (427).

Clearly the Cowboys defense was the highlight of the game, but the offense wasn’t too shabby either, as that great defensive play turned into points on the scoreboard. The Cowboys had a very balanced offensive attack, throwing for 239 yards and rushing for 188 yards.

The two offensive standouts were both receivers, once of which was Tay Martin, as he had a great showing, grabbing seven receptions for 130 yards, averaging 18.6 yards per catch. The other being John Paul Richardson, who is a freshman that has seen his snaps increase throughout the course of the season. He got the starting nod for the game due to Brennan Presley needing a game off from his receiver duties, so he took full advantage, grabbing six catches for 41 yards and a touchdown.