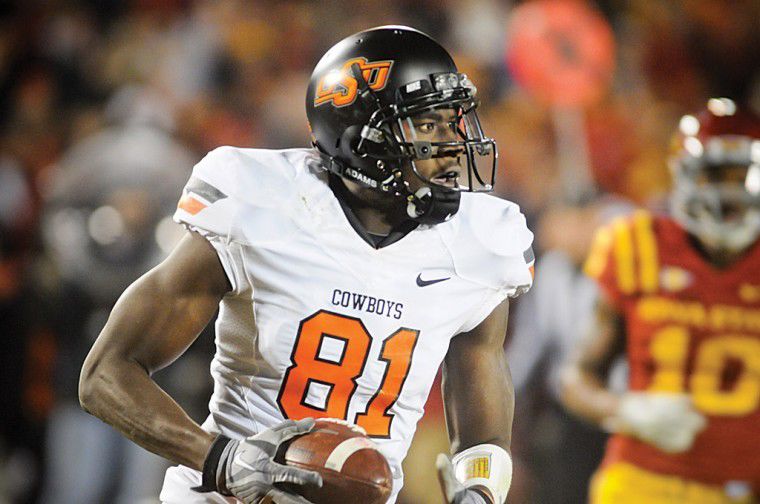 Former OSU wide receiver Justin Blackmon played for the Cowboys from 2008 to 2011. 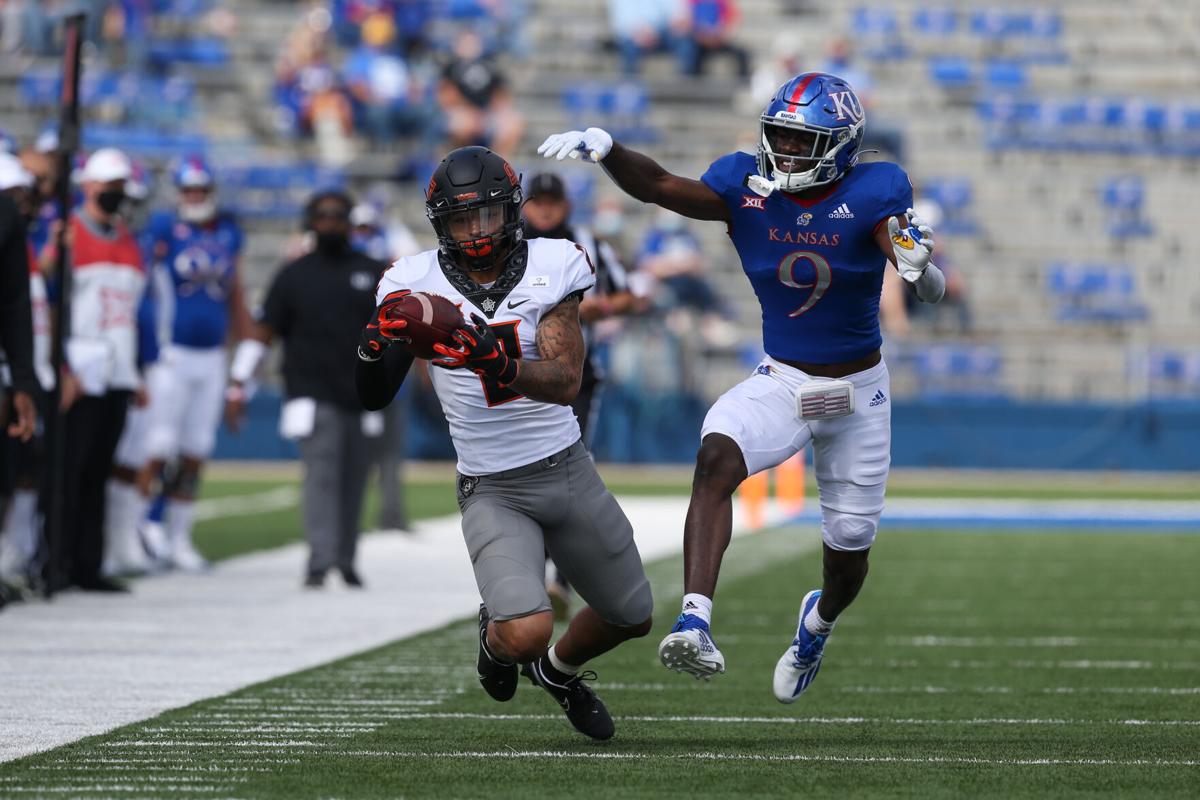 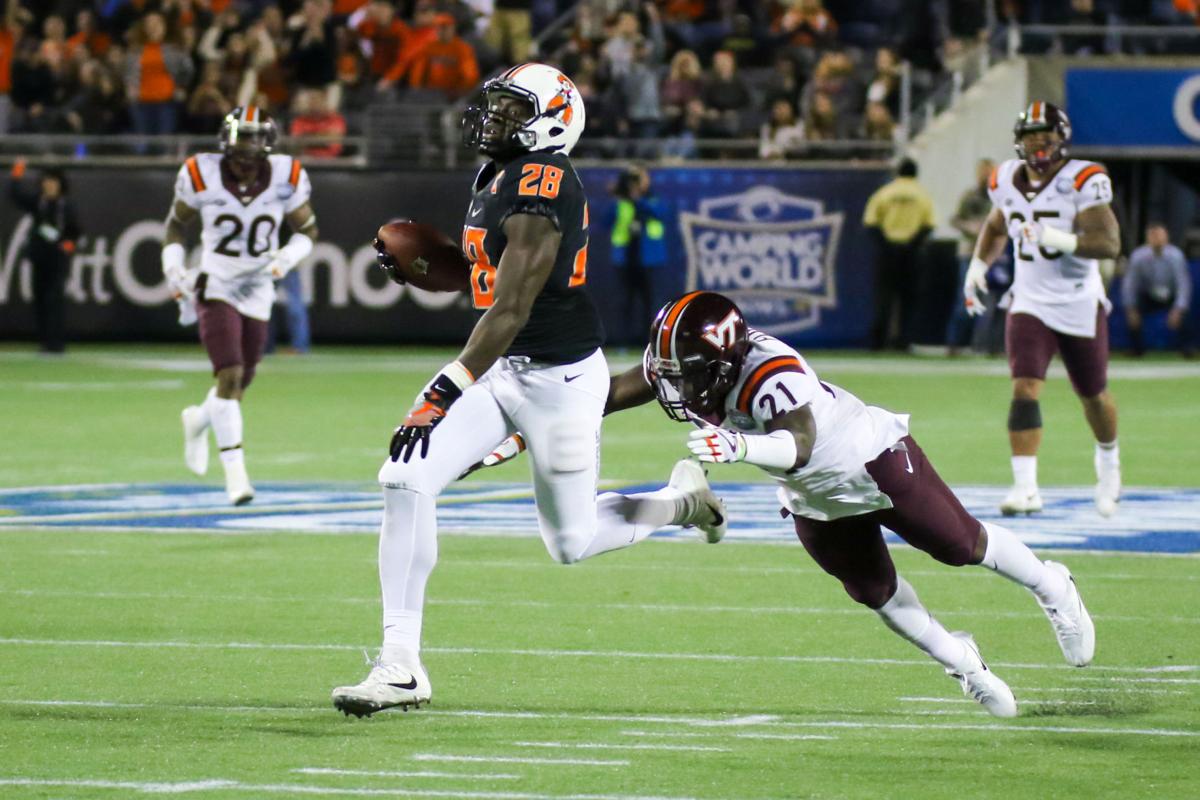 Former OSU wide receiver Justin Blackmon played for the Cowboys from 2008 to 2011.

The history speaks for itself.

Oklahoma State receivers have done it all.

Rashaun Woods, Dez Bryant, Justin Blackmon, James Washington and Tylan Wallace. These names are prominent in the annals of history, and have given OSU the reputation of “Wide Receiver U.”

OSU coach Mike Gundy rejoined the Cowboys coaching staff in 2001, becoming the team’s offensive coordinator, and would later become head coach in 2005. Since then, OSU has produced some of the best receivers in college football history. “Wide Receiver U” is the nickname fans and former players refer to OSU as, for having the best pass catchers in the country.

Not one receiver came to OSU as a five-star prospect, but honed their skill sets during their time on campus. The first receiver of the Gundy era set the precedent for all receivers after him in the two decades since was Woods.

Woods set multiple NCAA, conference and OSU records in his four seasons as a Cowboy. A native of Oklahoma City, Woods committed to OSU in 1999. In 2000, Woods did not score a touchdown, and caught less than 30 passes. In his freshman year, Woods saw flashes of greatness in himself.

“If guys are making plays, that is a tell-tale sign that those guys are going to be really special,” Woods said. “For me, it was my freshman year.”

From 2001-2003, Woods would break records. In the next three years, Woods would have three straight, 1,000-yard and 10-touchdown seasons. Woods finished his career with over 4,400-yards and 42-touchdowns, both Big 12 records at the time. Woods also set the NCAA record for touchdowns in a single game, with seven against SMU. Woods credits his success to Gundy and the coaching staff.

“From my receivers coaches, to Gundy, those guys are really good at their job,” Woods said. “Most of the success came from working hard. I was working hard. I was doing my part to make sure I got open and executed the plays. All and all, they were all hands on, and responsible for helping me become the player I ended up becoming.”

Hart Lee Dykes was a successful receiver for OSU in the 1980s, but Woods set a high bar for the group following his departure. Woods continues to remain humble, 20 years later. Woods said he believes every receiver who came after him at OSU are similar to him, people who work hard and who take the opportunities given to them in order to be the best players they can be.

Three years after Woods was drafted in the first round, Bryant took his talents to Stillwater. Bryant, a four-star prospect, was rated as a top-10 receiver in his class. Woods said he believes his success helped bring Bryant to OSU.

Bryant’s 2008 season numbers pop off the page. In 13 games, the sophomore receiver would catch 87 passes for 1,480 yards and 19 touchdowns. Bryant would be a finalist for the Biletnikoff, behind two other Big 12 pass catchers.

Bryant’s impact lives on in the minds of OSU players and fans, over a decade after his collegiate career ended. In OSU’s win over Oklahoma in 2021, wide receiver Tay Martin caught a touchdown pass and paid homage to Bryant in the end zone. With Bryant in attendance, Martin crossed his forearms in the air, recreating Bryant’s iconic “X” celebration, an act known well by OSU and Dallas Cowboys fans.

Martin said he was unaware of Bryant’s presence at Boone Pickens Stadium prior to the moment, but already knew once six points were added to the scoreboard he wanted to throw up the X. Martin was able to talk to Bryant later, and after being a fan of the former great for a long time, he was grateful for Bryant’s teachings.

Dameron Fooks, an OSU receiver during the 2009 season, was able to watch Bryant at his highest point. Bryant was coming off his statistically spectacular 2008 season, and he wanted to get even better.

Fooks watched and learned from Bryant in practice every day, and described Bryant as the hardest working person he had ever seen. Fooks recalls every practice, Bryant would try harder than he did in the games, and every rep he took was no less than 100%.

Although Bryant was not as vocal to Fooks, he set the example and showed every receiver how to practice.

The message was also sent to Blackmon.

Blackmon was a freshman in the 2009 season, and Fooks remembers seeing moments of talent in the young receiver.

“I saw flashes,” Fooks said. “He played a little more of a slot, but after Dez left he moved over to the X position where Dez was, and won the Biletnikoff. Before that he was still fundamentally sound, a good route runner, and the way he executed things. He was confident in everything he did, he trusted himself. He had all the intangibles.”

Although Blackmon had all the talent to become a great player, Fooks said he still worked for it. Fooks believes the way Bryant practiced was picked up by Blackmon, which allowed Blackmon to win back-to-back Biletnikoff awards.

The Biletnikoff award is handed out to the best receiver in the country for each season. Blackmon won the 2010 and 2011 trophy.

Although Bryant was suspended during the 2009 season, his 2008 season in which he finished with over 1,400 yards and 19 touchdowns, paved the way for Blackmon to accumulate 3,304 yards and 38 touchdowns in two seasons. Fooks considers Bryant’s work ethic and Gundy’s coaching allowed Blackmon to be drafted in the top five of the 2012 NFL draft.

Washington came next. He was on very few radars. His hometown of Stamford, Texas, is a small town with less than 3,000 people. Washington only held four Division I offers, however offensive coordinator Kasey Dunn discovered the young receiver, and the two formed an unbreakable bond.

Washington came to OSU as a three-star receiver, and just like those before him, sharpened his craft.

“I maximized every source and opportunity I had,” Washington said. “I met with Dunn on my lunch break or on his lunch break. Staying after practice to watch film with him. It did not even have to be with a coach. We would come together and just break down corners and learn the game amongst each other.”

Washington and Dunn’s relationship continued, and improved in their time together in Stillwater. Washington recalls times of the two fishing together in Dunn’s boat, taking trips to Idaho, and spending time at Dunn’s house talking about football and hunting.

Washington describes their connection “like a father and son relationship,” and said it has continued to this day.

Washington showed glimpses during his freshman year, where he caught six touchdowns. From his sophomore to junior year, Washington would have the second most receiving yards in Big 12 history, with 4,472, and 39 touchdowns. Washington won the 2017 Biletnikoff Award, the third in school history. With three, OSU became the school with the most Biletnikoff trophies.

Washington’s crowning achievement of his career was winning the Biletnikoff. Washington was excited he was able to win the trophy for Oklahoma State, but he was also able to fulfill his promise to his brother.

“It meant a lot,” Washington said. “I had a brother, he was really my cousin but I called him my brother. I told him ‘I am going to win this award and I want you to see me.’ A week before I won, he passed. It meant a lot to me because of that.”

Washington looked for outside help during his time to help him succeed, in the form of Bryant.

“I talked to (Dez) on Instagram,” Washington said. “Just about the mental side. It is a hard league to play in, especially for young guys. He helped me stay focused.”

In 2017, a young four-star receiver from Fort Worth, Texas, came to Stillwater. As a senior, Washington paid it forward, and helped the young player.

“It was a lot of fun,” Washington said. “They showed flashes, and there were times I saw me and my life and my journey in football. It makes you happy to help those guys, and give them tips and advice in life.”

The young receiver was Wallace. Wallace, and his twin-brother, Tracin, both committed to OSU, and were well-aware of the previous receivers.

“When you look at the lineage of receivers that have come through OSU and the offense they run, it was a major part,” Wallace said. “Both of us were offensive players and we thought ‘what other offense would we want to be a part of.’"

Although Tracin dealt with injuries throughout high school, OSU kept Tracin’s offer available. Gundy knew the importance of the brotherly connection, and Tylan said he felt cared for, leading to the twins commitment to OSU.

As a freshman in 2017, Wallace was able to watch Washington take home the Biletnikoff, and succeed in the Big 12. Wallace remembers learning from Washington, which he said allowed him to become better.

The very next season, Wallace became OSU’s No. 1 receiver, catching 86 passes for 1,491 yards and 12 touchdowns. Wallace would finish second in the Biletnikoff voting, and was a Heisman Trophy semi-finalist.

Wallace tore his ACL during his junior year, but decided not to declare for the draft, instead returned for his senior season. Wallace said he believed OSU had a special team who could compete for the Big 12 championship, but he also said he wanted to experience his senior year, and graduate with his brother.

Wallace was drafted in the fourth round of the 2021 NFL draft, but still thinks fondly of his time as a Cowboy.

“It was great, I don’t think I could have chosen a better place to attend over my four years of college,” Wallace said. “(Gundy and Dunn) were both great coaches, they are there for the players, they want to see everybody succeed, so it was really great to play for them over four years.”

Wallace, just as other former Cowboys did, returned to the sidelines of Boone Pickens Stadium for the 2021 Homecoming game. Wallace traded his helmet, pads, and cleats, for a bright orange beanie and OSU merchandise. Wallace was rejoined with his twin brother, who had since joined OSU’s coaching staff. Both Wallace’s were coaching during a game week, as Dunn remembers Tylan mentorship towards his former teammates.

“He talked to the receivers about what it is like playing in the NFL,” Dunn said. “The first thing he said was about effort. He was even teaching during our practices.”

Each aforementioned receiver was successful for one reason or another. None were five-star recruits, destined for success. They learned from receivers of the past, and honed their abilities. Woods set the standard, and the rest followed suit.

Wallace looked back on the past receivers and attests their success to meticulous effort.

“Each guy had their own thing that they were great at,” Wallace said. “I would assume it was their work ethic. The offensive system they run at Oklahoma State is one built for receivers to succeed in. If you ask me, they just took advantage of the opportunities given to them.”

Woods, however, said he believes the success of receivers comes from Gundy and the program he built.

“It is a testament to the development of the kids,” Woods said. “The coaches and their ability to develop guys has been phenomenal during the Gundy era. The strength and conditioning program as well. Those guys are getting stronger and are provided with the tools to maximize their ability. It’s important to get talented guys, but development still reigns supreme.”