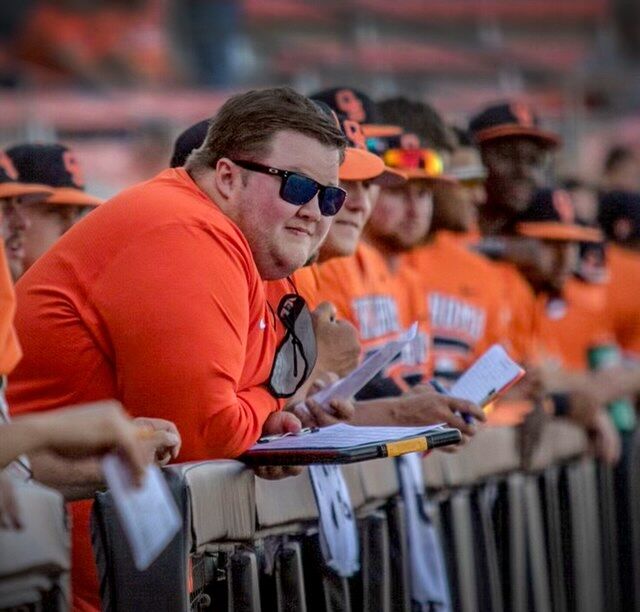 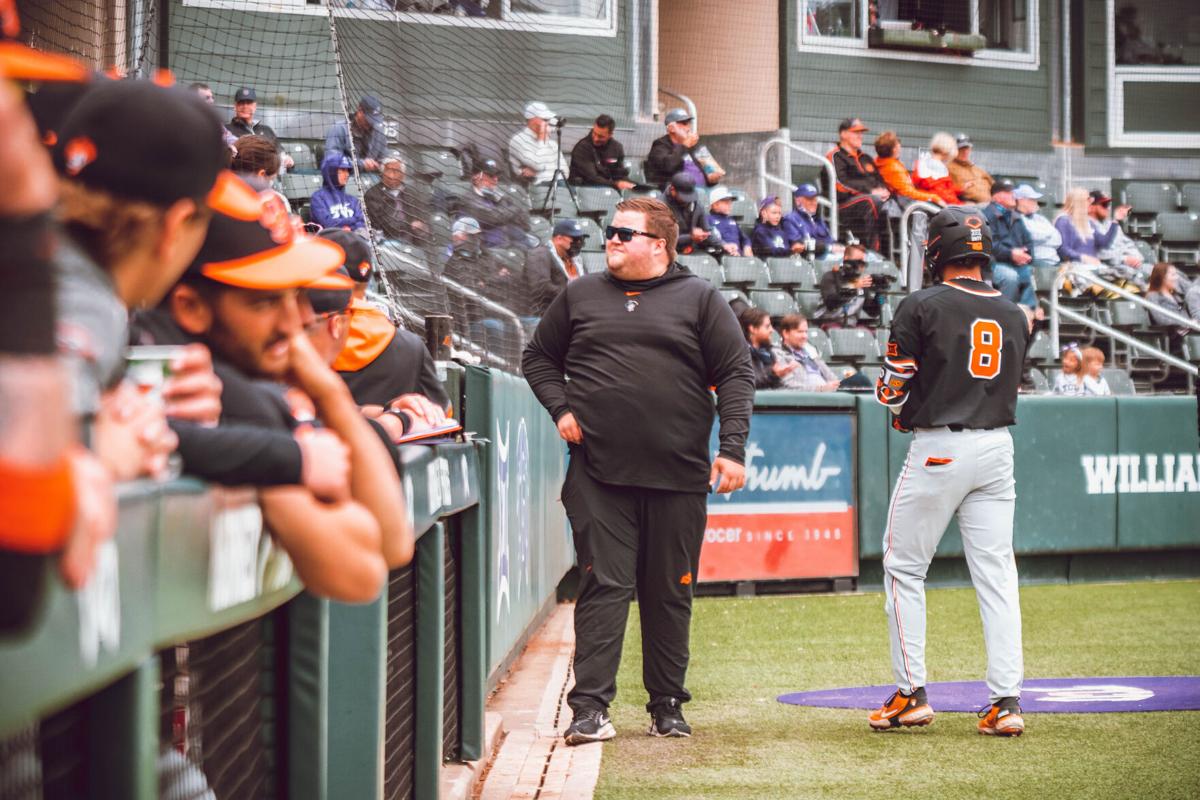 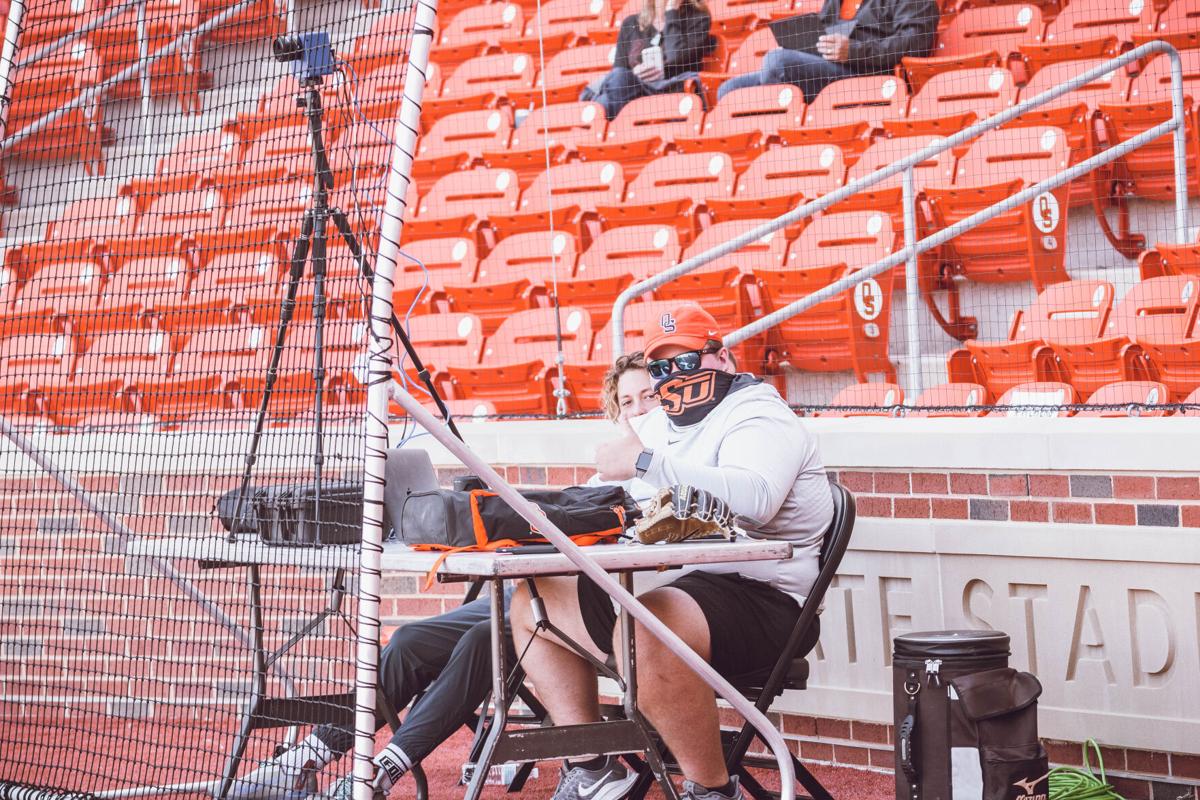 Then a 5-foot-8 tall “kid” came running into the apartment.

Simpson told Roberts he would be alone in the apartment often because of Simpson’s wild baseball schedule, something Roberts wouldn’t understand.

Except Roberts did understand.

“I worked for the White Sox double-A affiliate for five and a half years," Roberts said. "I started off as a bat boy, worked my way up to clubhouse assistant and then was assistant clubhouse manager. So I had a baseball background.”

It was just the beginning of Roberts' journey and deep-rooted connection to OSU baseball, one that sees him serving as a graduate manager and the unofficial team comedian.

“It’s all kind of weird how everything worked out with me getting into baseball,” Roberts said.

Simpson brought up Roberts’ name at a team meeting, the day they met, and Roberts interviewed for a manager position.

A month later, he was hired.

Roberts spent his first two years with the baseball team as an undergraduate equipment manager. The next two years have been spent as a graduate manager, a role Roberts likens to a graduate assistant on the football team.

“My first week and a half here, I would say I didn’t feel at home here," Roberts said. "It was more, I would go to class, come home and play Xbox or watch movies, I didn’t have much of a social life."

In his four seasons, Roberts has been at the receiving end of his fair share of applause from OSU fans, and even opposing fans, when he comes out of the dugout to fetch a bat, get a foul ball or even chase down the occasional beer can dropped over the outfield wall.

Roberts said he tries to not focus on the crowd during the game, but does find it fun when the crowd gets behind him.

“I think what really got the crowd going was when I would take a tumble,” Roberts said. “There’s a lot of guys behind the scenes here, it takes an army to get what we put out on the field. It’s cool to see when people realize that.”

Roberts has become a sensation on Twitter from his weather reports when Mother Nature strikes. What started as a way to reconnect with a former co-worker quickly grew into a whole production.

“It’s kind of taken off I guess. It’s not prepared,” Roberts said. “There’s a few guys when they know weather is on the way they are on call to get the job done.”

When Roberts worked for the Birmingham Barons, the White Sox Double-A affiliate, he and the strength coach at the time, Shawn Powell, had a close relationship.

Then in 2019, when Baylor was in Stillwater for what was supposed to be the final series in Allie P. Reynolds Stadium, it began to rain heavily. Roberts got an idea.

He remembered when Powell would make Weather Channel parodies during rain delays during the Barons games. He thought he would make one for the OSU game, and send it to Powell to say hello.

Victor Romero, OSU Director of Baseball Operations, saw Roberts' video, and told him to put it on Twitter. It blew up. On May 18, the official first Hub Roberts weather report was tweeted, followed by three other reports until the game was officially canceled.

The first weather report received 474 likes, and in total, all reports the first day had 636 likes on Twitter. The weather report had stuck into the minds of OSU baseball fans.

A week later, Roberts found himself at Chickasaw Ballpark in Oklahoma City for the OSU NCAA Regional, and it was raining.

“Typical weather in Oklahoma," Roberts said. "We go to Oklahoma City the next weekend, and that whole regional I spent maybe 85% of my time at the ballpark. We had rain come in, and they cleared the field. I was like, ‘We have to do it. We’ve got to do it.'"

Being in the visitor dugout, he had to show them. He showed a couple of Harvard players and a coach the previous videos. What they said next surprised Roberts.

“They said they’d help us out," Roberts said. "Those ones from Bricktown I had other teams in the middle of my shenanigans."

We have a weather report from the regional at Bricktown Ballpark. The sports meteorologist is back! #okwx pic.twitter.com/7ymYQve4Kg

However, not all of Roberts' job has been shenanigans. He has had the opportunity to grow close to coach Josh Holliday in his four years at OSU. He has also grown close to Matt Holliday, Josh’s brother and OSU volunteer coach. He said that if he ever needed anything, being 11 hours from home, he could trust either of them to help.

“Josh kind of took me under his wing my first year and a half,” Roberts said. “Josh and I, it’s a unique relationship. There’s days when we're bantering with each other. I can’t thank him enough for the opportunities he’s given me.”

Josh said he appreciates what Roberts has done for the program, and their relationship is unique, and he can always count on him for a laugh — or two.

“Hub’s one of a kind,” Josh said. “He has a place amongst the group. We’ve sure shared some fun moments together, and just like your players, you have to appreciate everyone involved in your program, and he is certainly one of those guys.”

With Roberts’ time at OSU beginning to wind down and he prepares to earn his OSU Masters’ degree in Leisure Studies, he doesn’t know where his next step will lead him.

He does know his time at OSU has been worth it, and if presented with an opportunity, he may stick around a little longer. He also said no matter what arises he will finish what he started, and remain with OSU through at least this season.

“I love it here,” Roberts said. “I’m not afraid to take a jump. I took a jump four years ago coming here and not knowing much. It’s worked out great for me, some of the best times of my life come from my time in Stillwater.”

Reflecting back, he would’ve never imagined what OSU baseball brought to him.

“Looking back ,if you would have told me, coming out of high school that this would be it, I wouldn’t have believed it," Roberts said. "It’s really unreal how everything happened.”