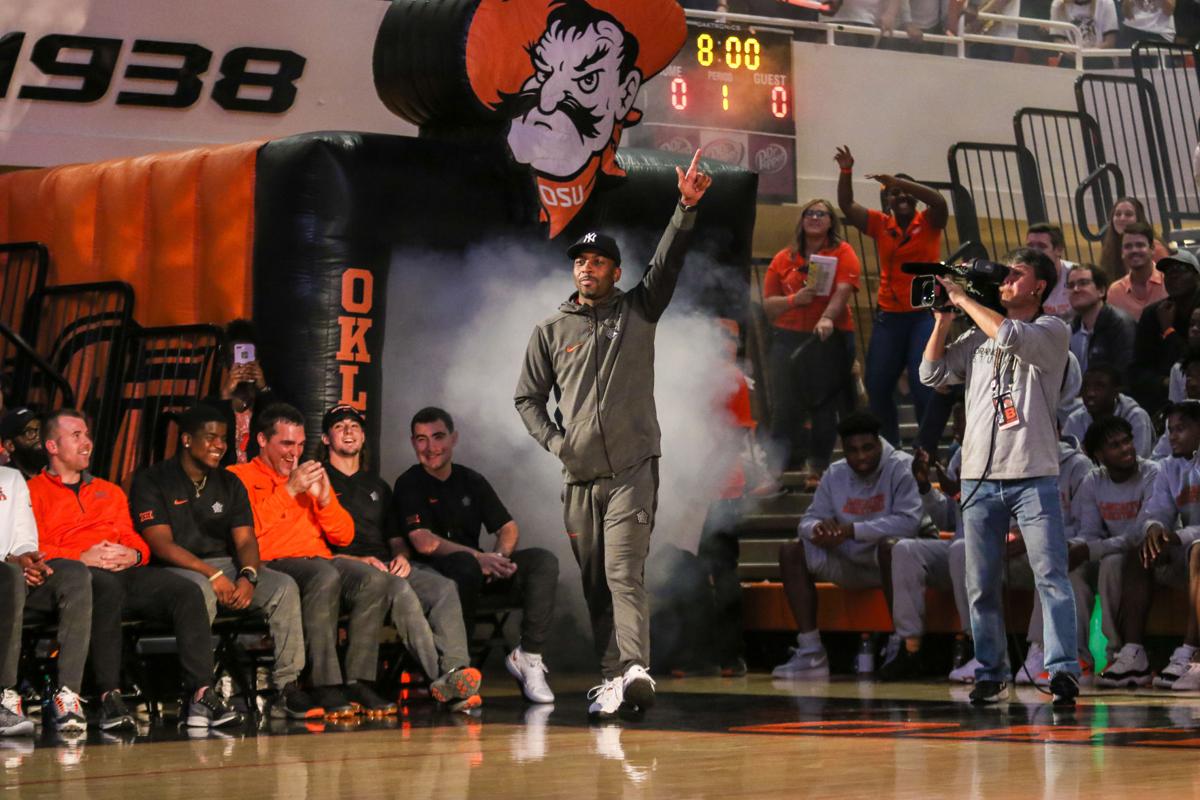 Mike Boynton comes onto the court during OSU's Homecoming and Hoops on Oct. 26, 2018, in Stillwater, Oklahoma at GIA. (DEVIN LAWRENCE WILBER/O'Colly) 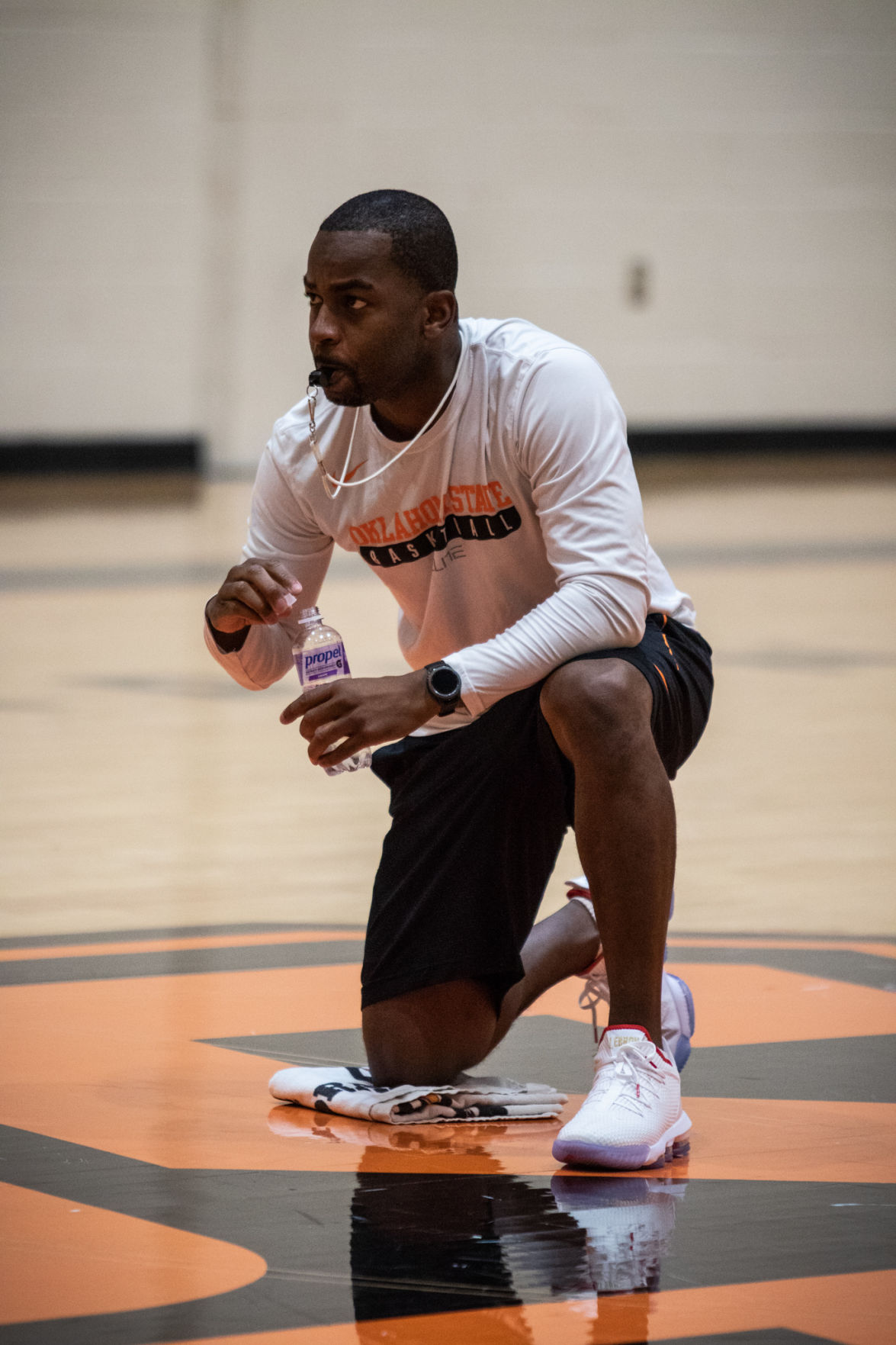 OSU coach Mike Boynton has developed a bond within his program through a passion for sneakers.

Mike Boynton comes onto the court during OSU's Homecoming and Hoops on Oct. 26, 2018, in Stillwater, Oklahoma at GIA. (DEVIN LAWRENCE WILBER/O'Colly)

OSU coach Mike Boynton has developed a bond within his program through a passion for sneakers.

Every time Boynton enters a gym to recruit, someone can point him out if he or she looks for two things.

He is the coach always wearing a hat rocking a fresh pair of sneakers.

“The truth is people always look at what you wear,” Boynton said. “People can identify your shoe game, especially younger guys. When I’m out on the road for recruiting, kids notice what shoes I wear. (So I wear) something that maybe the gym hasn’t seen or definitely something else that no other coach is wearing.”

Boynton’s shoe game obviously isn’t what swings decisions from recruits, such as Cade Cunningham, the nation’s top recruit, to come to OSU. But standing out in a way young people can identify with can’t hurt.

During games, Boynton is limited to dress shoes and a suit on the sideline. He is conscious of those decisions, too, having high-end brands such as Ferragamos, Balenciagas and Pradas in his closet.

Despite Boynton’s attention to detail, the OSU basketball team’s players' shoes are much more eye-catching on game days. The players’ sneakers are what people pay attention to. Senior forward Cam McGriff’s Jordan collection stands out in particular.

If you ask almost anyone in the program, Boynton has the best shoe game.

Boynton has always been a sneakerhead. He remembers being the first guy he knew to get Nike Foamposites when they released in 1997. The Jordan 14 was his favorite shoe to rock during his playing days.

Boynton is usually humble when talking about most things, but even he knows who is on top.

“It’s not debatable,” Boynton said. “No one else is really close in the conversation. There’s a big gap between me and everybody else.”

The players might not reach the sneaker royalty heights of their coach, but they love shoes, too.

In the OSU locker room, there is a glass display case that shows off about a dozen shoes the players are given, ranging from Kobes to Kyries to Air Maxes.

Each player is given one pair each. Most of them are customized to have bright OSU orange details. They have replacements in four sizes in stock if a shoe breaks.

“The most popular shoe is probably the Kobe AD,” graduate assistant Isaac Rosenthal said. “For this year’s shoe we customized the Giannis’. We have running shoes, a travel shoe. I mean, they’re stocked. A lot of the guys will wear whatever game shoe they want, but most of the time it’s our shoes.”

Although OSU provides a lot of the sneakers, players are in charge of them once they have them.

When the Cowboys go on the road, Rosenthal said he sends out a text to the team reminding everyone to pack a pair of shoes.

OSU is a Nike school, so naturally players favor the swoosh.

Despite Nike being his favorite, Dziagwa has a soft spot for another brand. He is friends with Kevin Knox, a New York Knick, who has a deal with Puma. Knox and Dziagwa attended Tampa Catholic High School in Florida.

Puma reentered the basketball shoe market a couple of years ago, and Dziagwa said he thinks the brand is up and coming.

Laurent is happy to be back at a Nike school after playing at UMass, which has an Adidas deal, last season.

“It was tough (to have to wear Adidas),” Laurent said. “There ain’t too much swag. I’m trying to represent myself right out here.”

Along with looks, comfort is a pivotal aspect of a shoe players look for to play in. Regularly wearing a comfortable shoe helps limit wear and tear on the body during a grueling college basketball season.

Laurent has a lot of shoes he can’t wear anymore because his feet grew from a size 14 to 15 within the past couple of years. Most of his Jordans don’t fit him well enough to play in anymore.

He has been wearing KDs because they are one of the most plush shoes he has found.

Inspiration is another reason players choose to wear certain sneakers. They like to rock the lines of players they look up to. Laurent grew up idolizing players such as Michael Jordan, Kobe Bryant, Paul George and Kevin Durant. He uses his shoe choices to represent his heroes.

“I try to represent (Bryant) whenever I can,” Laurent said. “I would say the inspiration those guys bring to me is one of the reasons why I wear their sneakers.”

Dziagwa also said he will likely rock Kobes for the rest of the year to honor Bryant, a basketball legend who died in a helicopter crash in January.

He might be biased, but Dziagwa said his shoe game is the most slept on despite his getting in the habit of wearing the same shoes every day.

He did recently add a shoe to his collection, trading freshman guard Keylan Boone a pair of Jordan 6s for some 1s, Dziagwa’s favorite model.

Originating strictly as performance basketball shoes, the Jordan line has been mainstream for decades. They’re the most iconic sneakers out there. Everyone knows about Js.

Jordans are synonymous with basketball, and Boynton’s elite collection has earned him another kind of respect from his players.

“I think it’s just part of the culture,” Dziagwa said. “The basketball culture is the Js. I feel like it’s obligated to say whoever’s got the best shoe game has the best Js.”