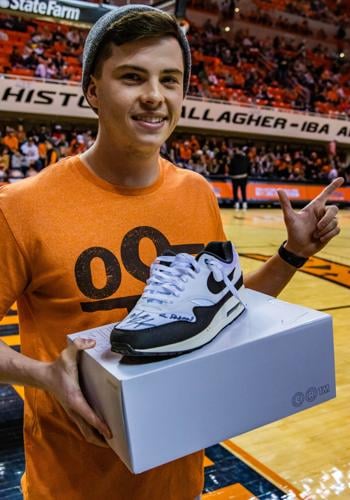 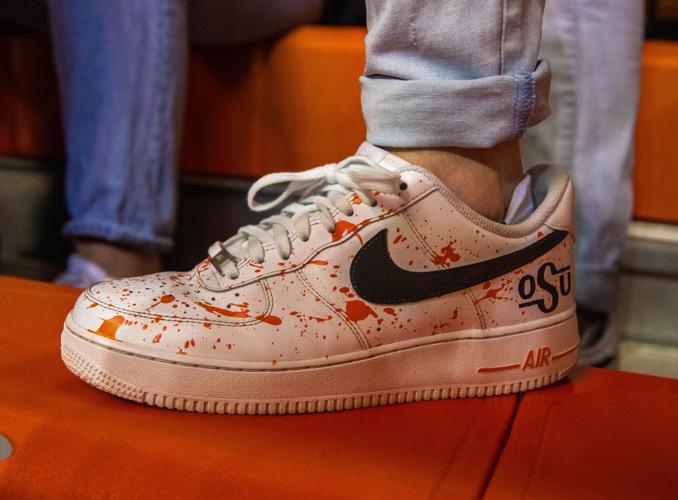 Cody Bauer won a pair of shoes signed by coach Mike Boynton for the applause his custom Air Force 1s got at an OSU basketball game. 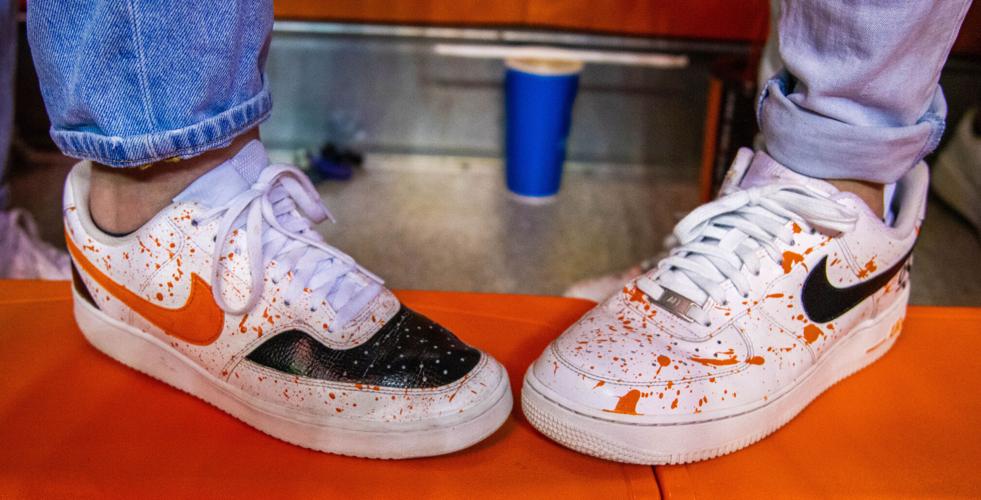 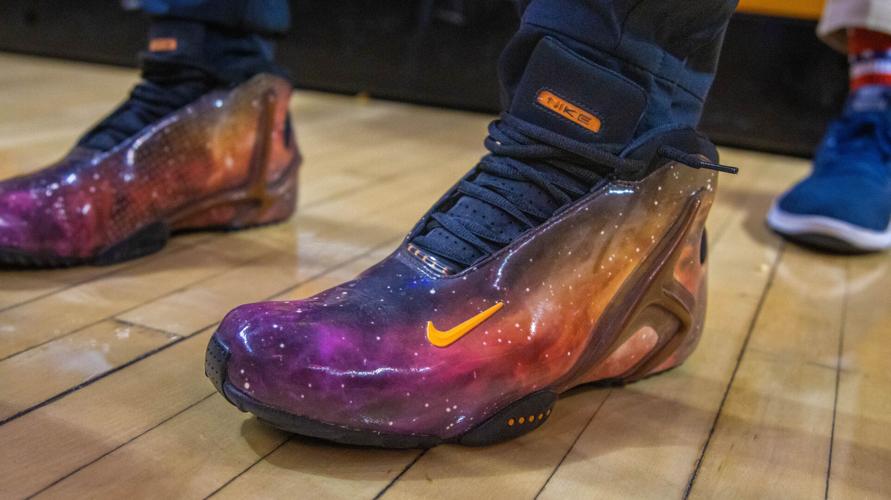 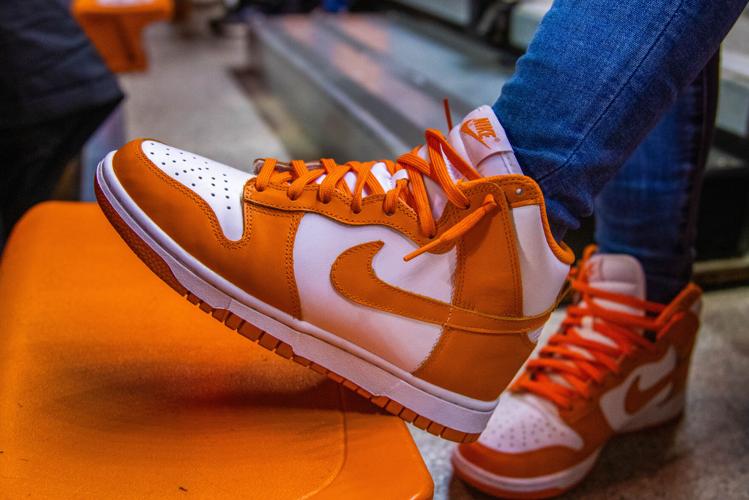 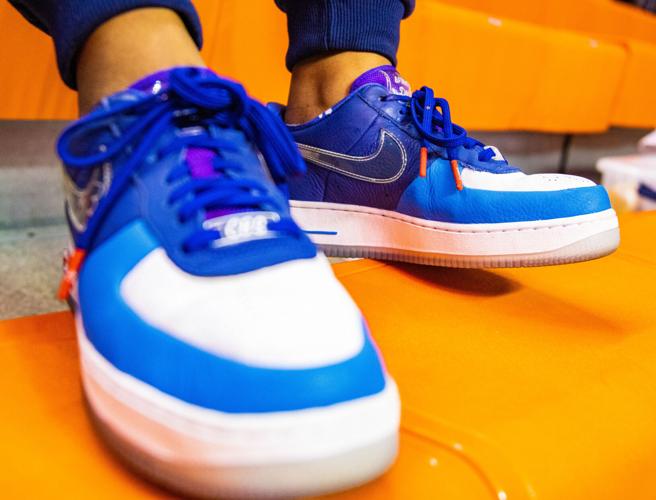 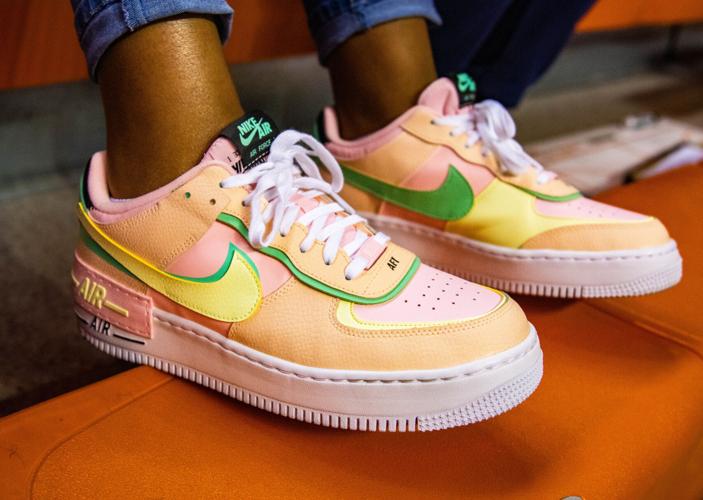 Avamarie Blackmon wore these colorful Air Force 1s that she got in New York City to the Jan 26. OSU basketball game.

Cody Bauer won a pair of shoes signed by coach Mike Boynton for the applause his custom Air Force 1s got at an OSU basketball game.

The folding table couldn’t contain the paint speckles, but the mess was worth the clean-up.

Cody Bauer, a fire protection safety engineering major at OSU, had little time after he saw the social media post. The Cowboy basketball team was having a shoe contest at its next game. Coach Mike Boynton’s directions in the video were clear.

“Make sure the drip is good,” Boynton said.

Bauer saw the video the night before the game. He contacted his sister, Makenna, and they put up a folding table in Bauer’s living room and grabbed a pair of white Nike Air Force 1s.

“I’d previously already had those Forces,” Bauer said. “I try to keep all my shoes relatively clean. I saw the post about what they're doing for the challenge or whatever. And so my sister and I just kind of got to thinking , ‘Well, we've always wanted to do it, so why not now?’”

Bauer is interested in the custom shoe game, and even bought a pair of off-brand leather shoes at Christmas to try his hand. He knew he needed to use his Air Force 1s, the real deal, for the game, so the pressure was on.

“I'm not much of an artist,” Bauer said. “That's why I kind of had my sister around. She's definitely the artist in the family. So very creative. Very, very good with painting.”

They worked on the shoes for about four hours. Makenna brought a pair to customize as well. Some of the details were planned. Others, like the emblem painted to the back of Bauer’s shoes, were spontaneous.

Speckling the shoes in paint was tedious. They loaded a brush up with paint and flicked it at the shoe. The speckles coated the shoes. And the table. And the surrounding cabinets.

“We got paint absolutely everywhere in the house,” Bauer said. “That took a lot to clean that up.”

At the game, Bauer was picked from the crowd as one of the top contenders. The crowd cheered loudest for him, and he was crowned the winner.

Bauer won a signed pair of shoes from Boynton, which he will display.

“I probably wouldn't ever wear them,” Bauer said. “One, they're a little too big for me and two, I don't know that I want to wear a signed shoe. I mean, they're the Air Max 1s I believe, so they're a really nice shoe.”

Tracey Walker identified the need with a quick glance, and came up with a solution.

The fix wasn’t hard to find. He was wearing it.

Walker hardly ever misses an OSU game Gallagher-Iba Arena. He enjoys watching his son, Rondel, play. With the added incentive of the Jan. 26 game, a shoe competition, he settled into his usual spot at the front of the student section above the Cowboy band well before tip.

Walker chose to wear his Nike Flights, black, purple and orange galaxy themed shoes. They reminded him of the movie Space Jam, which helped in the difficult selection process.

Walker estimates he has a few hundred pairs. It’s a welcome infestation, but some rooms of his house are bursting with Nike, Adidas and Reebok kicks.

Walker’s collection can be overwhelming.

“You actually can (lose track of what you have) and turn around and buy the same pair, or have something very very similar,” Walker said.

But on game night, Walker wasn't focused on his shoes. Walker started another collection. A collection of one. And it, too, was overwhelming.

Walker noticed a member of OSU’s band gawking at his shoes. Walker looked at the boy’s shoes and had a quick thought.

After the game, Walker offered his shoes to the band member.

Walker, who places importance on mentoring and service, was insistent. Walker gives away almost as many shoes as he buys, and he wanted to bless the boy. When finding out the boy was a big fan of the Cowboys, Walker called Rondel over and set up a meeting on the court.

“(He was) surprised, intrigued, happy, excited,” Walker said. “Couldn’t believe the fact that he got a conversation with Rondel. Shoot, overwhelmed because I think he cried as well.”

Rondel autographed the shoes. Walker, who occasionally loads shoes from his collection into 50-gallon trash bags to give to homeless people in OKC, did not share the meeting on social media.

“I’m not saying (posting on social media) is a bad thing, but I just know that (it feels good) when you’re doing right because you want to do it,” Walker said. “I don’t think the world has to know.”

A glance at Mike Boynton's shoes reveals the intensity of a game.

While scrolling through Instagram, Wood, a marketing major at OSU, saw the video announcement Boynton made in his office.

“I only have two really nice ones,” Wood said. “My Syracuse high top dunks and purple pulse dunks low OG.

Wood went to the game wearing the orange dunks. She went with her boyfriend, who doubled as competition. He wore gold toe Jordan 1s.

Wood went to every home game, and said the atmosphere was good. People in the crowd got especially vocal when prompted to cheer for the shoes they liked the best. Wood was a fan of the night.

“(Boynton) does an amazing job,” Wood said. “I also knows he tries to go to every sport OSU has which I think is awesome.”

Dayna Brown likes her shoes to be unique.

“I wouldn’t say I’m a shoe collector, but I do have some shoes that are pretty out there,” Brown said. “I do tend to go for shoes that I don’t see so often.

Brown decided to wear her blue Nikes with a basketball on the back to the game. She didn’t have a hard time picking because for her, the outfit always comes first. She went with some friends, and they all brought their best shoes. She said her group was in good spirits.

“You could feel that everyone was feeding off each other’s energy, which overall made it a pretty amazing place to be,” Brown said.

Brown went to pretty much every game, and was sure to make time to attend. She said the excitement that night ranked near the top of the season.

“The energy was unfathomable,” Brown said. “It was one of those night where you just had to be there.”

Avamarie Blackmon was on a special trip when she got her shoes.

For her 21st birthday, Blackmon, a junior Health Education and Promotion major, traveled to New York City with her dad. She went to the Nike Store, and a pair of AF1 Shadows caught her eye.

The Artic Punch/Barely Volt/Volt Discreet colorway pops. It’s the same reason she wore them to the game, but the contest was just a plus. She would have been in Gallagher-Iba Arena anyway.

Blackmon did not miss a home football or basketball game this season. Her older brother, Justin, played football for the Cowboys, and said she is a huge OSU fan.

Despite her fierce loyalty, Blackmon had to be careful when cheering from the student section. The close quarters and jumping around suddenly became hazards for her shoes.

“I was terrified of scuffing my shoes,” Blackmon said. “I was really careful cheering that game.”

Blackmon said she likes what Boynton is doing to engage students and increase fan support.

“I love what Coach Mike is doing, and I love how he cares for the fans,” Blackmon said. “You can tell that he really cares about us and knows that we can help hype up the team in crucial situations.”