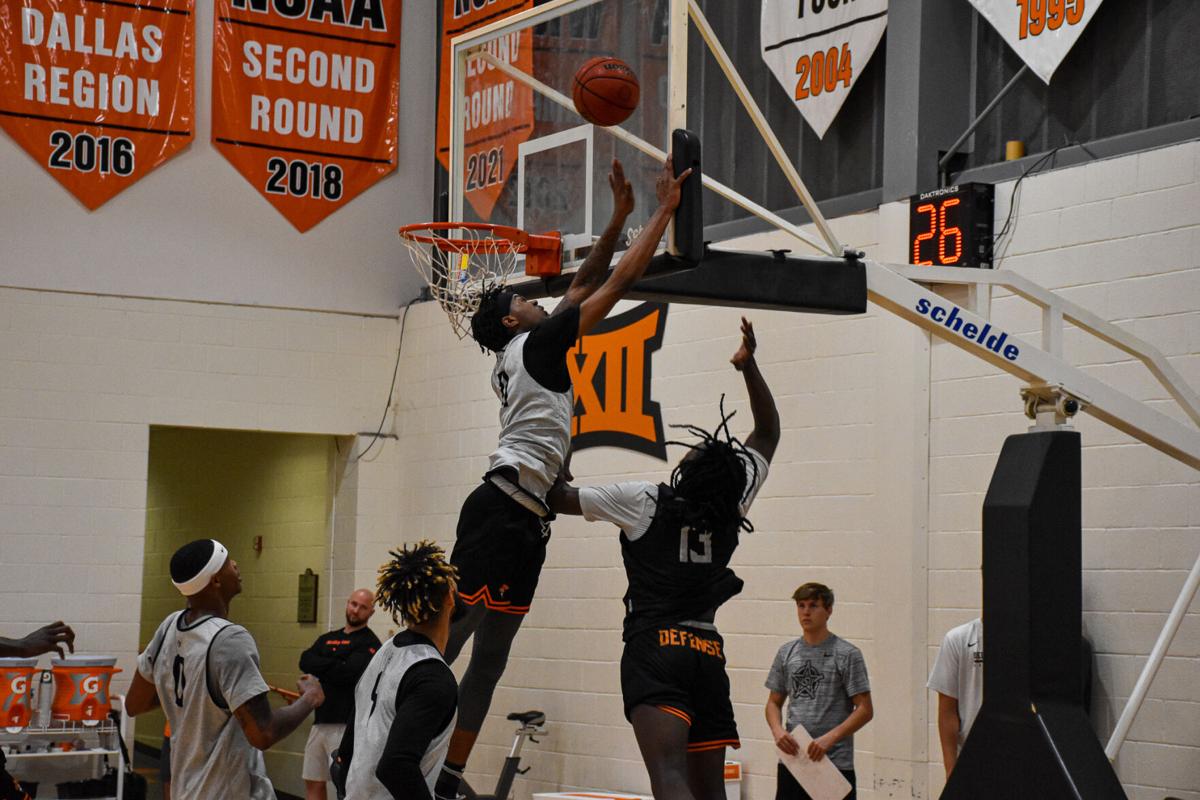 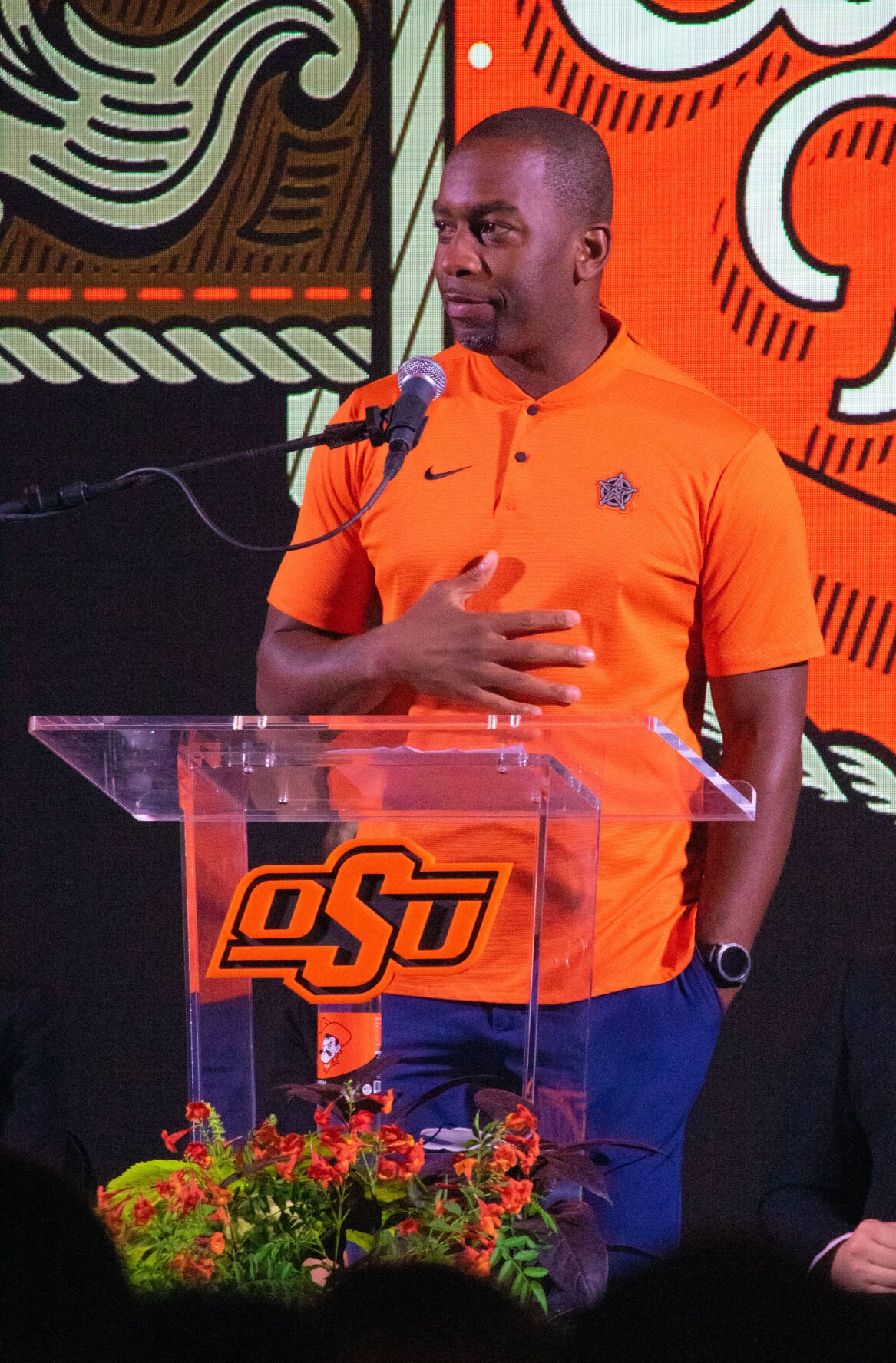 Coach Mike Boynton attacked the transfer portal this offseason and put together a sweet class solely reliant on transfers.

With two of the four rating as former five-stars, a guy like forward Woody Newton can get swept under the rug. Still, Newton — Boynton’s first transfer commit this recruiting class — has the makings of someone who could be a valuable asset for Oklahoma State.

Newton’s numbers don’t provide an accurate glimpse into his skillset.

At Syracuse, Newton played sparingly as a freshman. Newton made an impression early in nonconference play and had fans clamoring for Syracuse to increase his minutes.

But from there, things went the opposite direction. Newton ended up appearing in only 11 games, checking in with 7.9 minutes per game. He finished with averages of 3.5 points, 1.8 rebounds and 0.1 assists.

However, his per-40 minute averages look a lot better with 17.5 points and 9.2 rebounds.

When Newton was on the floor, he provided a floor-spacing presence for the Orange. Newton looked comfortable as a spot-up shooter and was successful in that role, shooting a crisp 38.9% from beyond the arc.

Newton’s shooting form is sound. He possesses a natural shooting motion with a high release point. With his 6-foot-8, 200-pound stature, Newton isn’t afraid to attempt 3-pointers with a hand in his face.

That was Newton’s primary role for the Orange, but he displayed solid ball-handling and playmaking skills. Newton came out of high school with a reputation as a slasher who could attack the rim. He certainly showed some of that as Syracuse.

Newton is a smooth, swift athlete with above-the-rim athleticism. He loves to dunk the ball.

And when Newton operates with the ball in hands — which can come off a curl cut or some other type of motion — he flashed the ability to pull up off in the mid-range. And he’s also an adept enough passer to find a teammate.

The sophomore forward isn’t going to blow you away with his repertoire, but he’s a versatile piece on both sides of the ball.

Syracuse coach Jim Boeheim is synonymous with a 2-3 zone — the way Peanut Butter and Jelly go together.

Newton slipped right into that defensive scheme and showed active feet. His wingspan isn’t listed, but Newton’s length is certainly eye-catching. With his physical tools and athleticism, Newton was able to contest shots and even flashed a bit as a shot blocker.

We mentioned that 9.2-rebound number earlier — which should be taken with a grain of salt considering the small sample size — but he’s certainly capable. Newton displayed a propensity to crash the glass on both sides of the court.

He is a versatile piece who looks like a strong fit for OSU’s roster.

While his playing time wasn’t desirable, Newton’s usage rate was actually notable. He held a 20.8% usage rate, which ranked fourth on the team.

But usage rate can be deceiving. It doesn’t account for assists or potential assists or determine whether those attempts are in transition or in the half-court. Basically, it doesn’t accurately depict how ball-dominant a player is, but rather it displays their statistical output.

In this scenario, the big takeaway is that Newton isn’t some ball-dominant guy who needs the ball to produce. Rather, he’s capable of taking and making a relatively high volume of shots when he is in the game.

With Newton in the fold, OSU’s guard-heavy roster is bolstered by another forward. If Newton can slide and play some power forward, he’ll be another valuable asset.

Boynton has shown the propensity to play position-less basketball and put the five best players on the court — assuming they can hold up on defense.

The Cowboys flashed better 3-point shooting last year, but as a whole, it was inconsistent. OSU shot 33.2% from beyond the arc, which ranked 202nd in the nation. And they only took 19.1 3-pointers a game, which ranked 271st.

Of the four transfers, Newton appears to be the best 3-point shooter. That is a place I think Newton can step in and be a plug-and-play into the rotation with his reliable 3-point stroke.

With four years of eligibility left, Newton can keep developing and sculpting himself into a dangerous wing for Boynton.

With his physical tools, it should be interesting to watch.

When you look at OSU’s roster, there are so many talented pieces. It’s difficult to really pin down a rotation, let alone a starting lineup.

Boynton has proven to be flexible with his lineups, he’s not afraid to adjust his starting lineup or rotation at any given point.

While there are a number of guards on this roster, Newton — and everyone else — need to earn their spot in this lineup.

Newton factors to be a part of it.