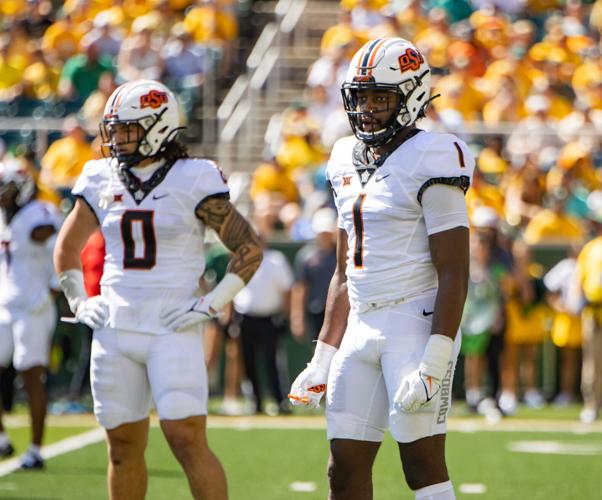 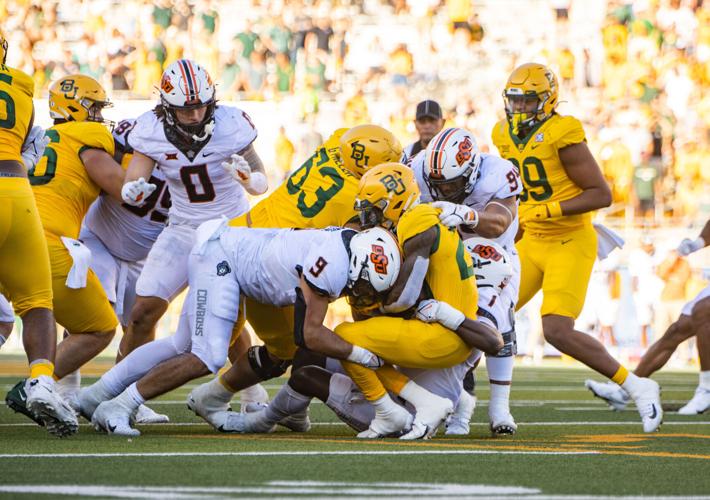 Momentum shifted for OSU many times, particularly on the defensive end.

Momentum shifted for OSU many times, particularly on the defensive end.

WACO, Texas — Mason Cobb darting through an opening to drag Baylor running back Richard Reese down epitomized the role reversal.

It was Baylor’s turn to lose.

Cobb’s tackle in the second quarter, which prematurely ended Reese’s attempt at a fourth-and-one conversion from the OSU 10-yard line, looked eerily similar to the play that haunted the Cowboys. The play that many Baylor fans brought homemade signs about. The play that ended the 2021 Cowboys’ shot at a Big 12 title on AT&T Stadium’s 1-yard line.

But Jarion McVea, the Baylor tackler who heroically pulled down Dezmon Jackson in OSU and Baylor’s previous meeting, is now out of college. And on Saturday, OSU was the beneficiary, not the victim, of spectacular plays.

Coming off a bye week, OSU beat Baylor 36-25 in the Cowboys’ first conference game of the season.

“Players stayed focused for two weeks and practiced well," coach Mike Gundy said. "They gave great effort. They were competitive…obviously it was a good win for us.”

Like the aforementioned championship matchup, the meeting was a high-stakes game. The Cowboys, ranked No. 9, and No. 16 Baylor are expected to settle near the top of the Big 12 standings when the season ends. But that was about where similarities stop between the games.

OSU quarterback Spencer Sanders stayed sharp and stayed crisp — a contrast to his four-interception game against the Bears last season. Sanders completed 20 of 29 passes for 181 yards and a touchdown, with one pick.

“The game was definitely more personal for me, and I just made sure I did everything I could to hold myself accountable,” Sanders said.

Sanders also displayed his knack for picking up yardage on the ground in key situations. He ran 14 times for 75 yards and a score.

“He converts a lot of plays with his legs,” Gundy said. “And you see that in college football now. The quarterback, in my opinion, what he brings to the table is he can convert first downs and keep the chains moving with his legs.”

Early, the Cowboy offense put together multiple methodical drives, something offensive coordinator Kasey Dunn said he was quite pleased with. In the third quarter, the fast-paced Cowboy offense picked up its speed.

Redshirt freshman Jaden Nixon took just 13 seconds to score on Baylor’s kickoff to open the second half. OSU scored a touchdown in 44 seconds on its following possession. A 50-yard return from junior receiver Brennan Presley set up Sanders at midfield, where he threw an arching pass to senior receiver Braydon Johnson at the front right pylon.

Johnson elevated, made the catch and came down at the 1-yard line, where Dominic Richardson (24 carries for 73 yards) scored to expand OSU’s lead to 30-17.

“Third quarter was like a video game,” Gundy said.

OSU also flipped the script on defense. The Cowboys picked Baylor quarterback Blake Shapen off twice, after not doing so at all in the Big 12 Championship.

The Cowboys also stopped Baylor twice on fourth down. Though surrendering 457 total yards, OSU’s defense turned Baylor over in the red zone — courtesy of the Cobb tackle — and held the Bears to a lackluster scoring output.

Jason Taylor’s toe-drag interception with 2:55 left allowed the Cowboys to salt the game away and perhaps alleviate some salt in the wound of their defeat in the 2021 postseason.