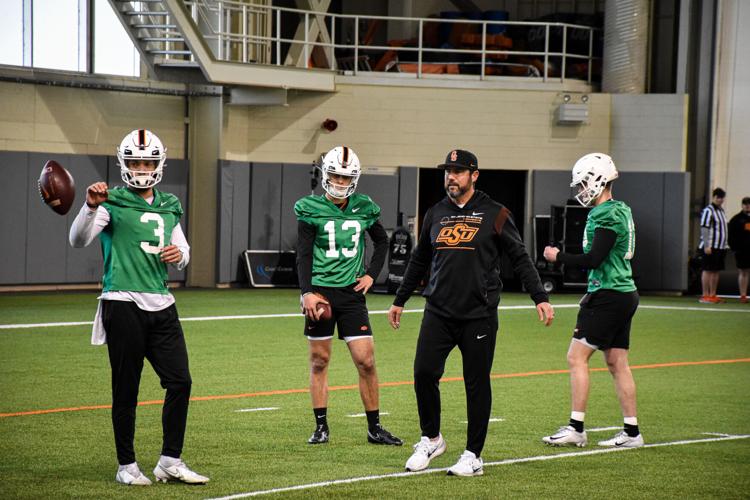 The OSU quarterback room returns its starter, Spencer Sanders, but will look for a new backup for next season. 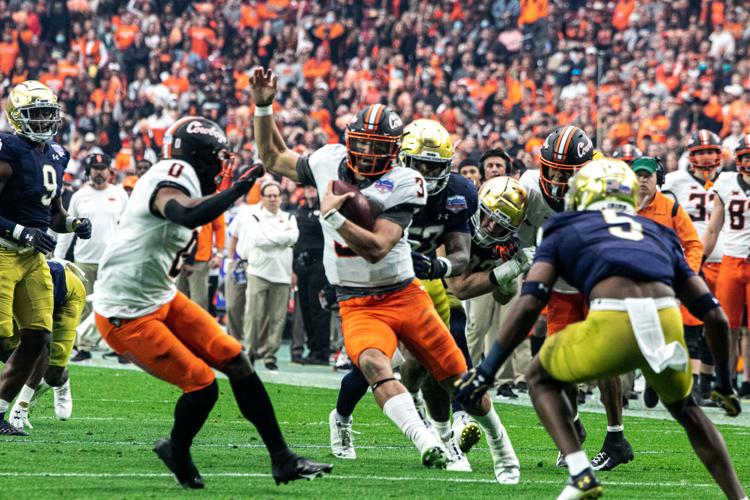 With a blossoming transfer portal, retaining quarterbacks for the long-term is becoming an issue in college football.

The OSU quarterback room returns its starter, Spencer Sanders, but will look for a new backup for next season.

With a blossoming transfer portal, retaining quarterbacks for the long-term is becoming an issue in college football.

The concern has only heightened with the always daunting transfer portal – the cause, and solution, to all of college football’s problems.

The Cowboys already took a hit this offseason. Second-stringer Shane Illingworth, who started three games over two seasons, ditched OSU’s posse for the Nevada Wolf Pack. Quarterbacks continue to trailblaze the portal, and it is showing in the Big 12. Oklahoma and Texas will be playing with transfer QBs this season. Kansas State will too.

The Cowboys retained their starter, Spencer Sanders, who enters his fourth year as the OSU signal caller but weren’t so lucky with their backups. Gundy said having formidable depth at the position will only continue to become harder.

“I think this is going to be common,” Gundy said. “I don’t know that it will be easy to keep more than two to three quarterbacks on a scholarship at once, just based on the availability of the open market.”

Sixth-year quarterback Ethan Bullock was also marked off the roster after exhausting eligibility, leaving the Cowboys with four quarterbacks.

Sanders, Gunnar Gundy, Peyton Thompson and Garret Rangel. Only one of them have started a game.

Sanders, now in his fifth season overall with OSU, said having spent numerous years in one program has paid off for him.

“It just builds relationships,” Sanders said. “Obviously, being here so long, I’ve got a relationship with all of them. It is just like we know how each other think.”

But Sanders has yet to play in every game in a season, making the backup spot crucial. Illingworth used to fill the gaps, but now OSU doesn’t have the luxury of a bona fide second-stringer.

The search is on.

Gunnar Gundy is the only other quarterback to have played in a collegiate game – a couple handoffs late in the TCU blowout. Rangel, a four-star early enrollee from Texas, has received optimistic praise from Gundy and Sanders early in spring camp.

"I think (Rangel) brings good leadership," Sanders said. "He's always got a smile on his face. He brings his best."

Gundy said the quarterback position has also become more difficult. He can’t remember a time where it has been harder in his 30-plus years of experience in college.

The reason? Defensive linemen are evolving. They’re impacting games in the same way NFL d-linemen have the past 20 years. The athleticism is off the charts. The defensive systems have also increased in complexity. Compared to six years ago, pre-snap reads, disguises and blitzes are becoming harder for a quarterback to recognize and adjust to.

“I worry about that,” Gundy said.

Mike Gundy is the highest-paid coach in the Big 12.