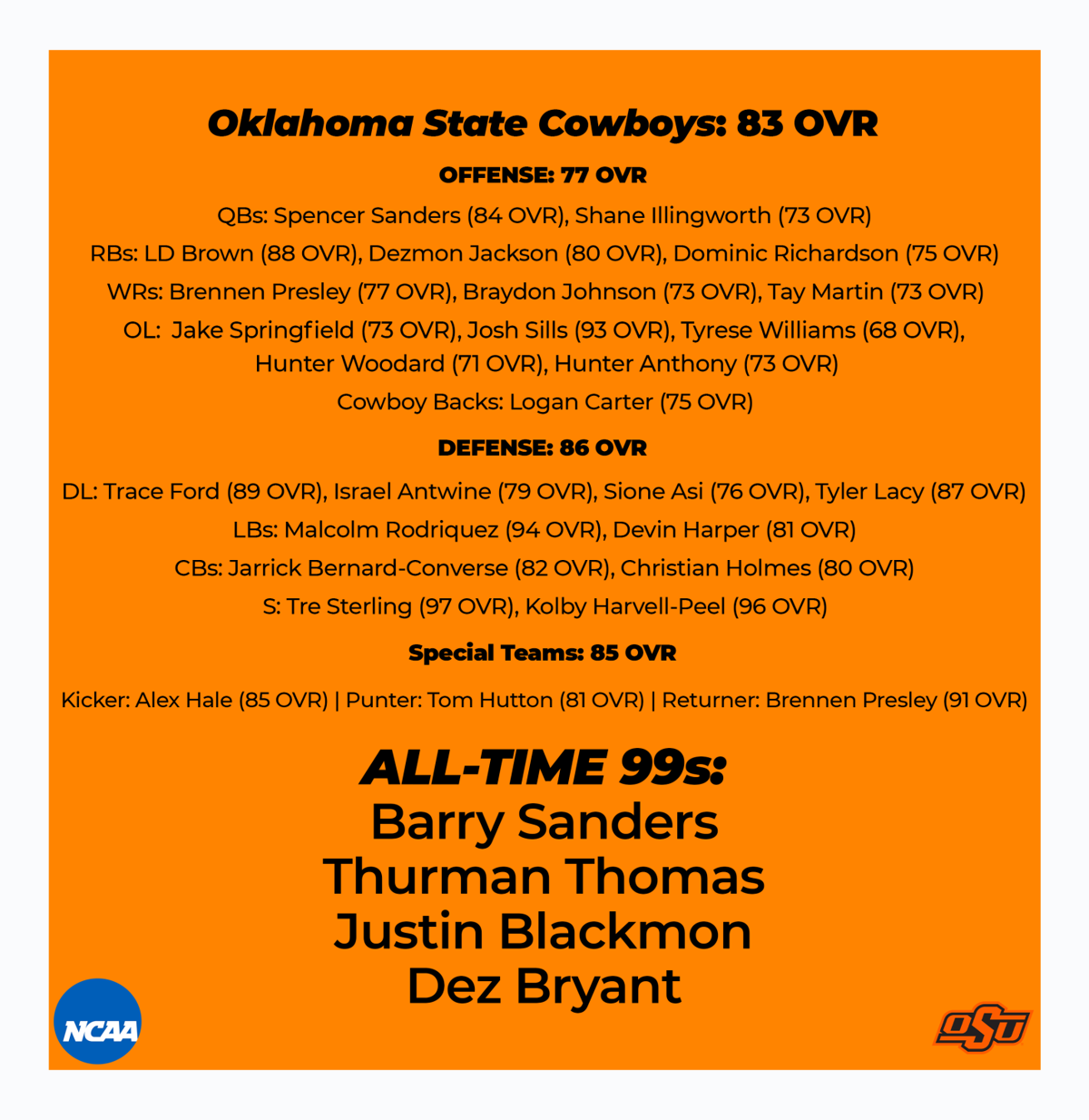 The O'Colly · Deep In The Novo - Episode 39 - Football: Season Recap

EA recently announced it would be bringing back the NCAA football video games back. In accordance when that, The O'Colly put together what it thinks the ratings might look if the game were to drop this year.

Sanders showed immense improvement in the 2020-21 season, which was good enough to earn him a mid-80 ranking. Sanders has the ability to be a star quarterback with his athleticism and speed. His arm strength and accuracy are lower than some Big 12 quarterbacks but still rank near the top of the conference.

Illingworth’s arm strength and accuracy rank near the top of the Big 12, but he lacks the same athleticism as Sanders.

Speed and big play ability are two things that help make Brown into a top running back on the roster.

Jackson possesses a rare combination of speed and strength that makes him dangerous to opposing defenses.

Only a freshman, Richardson is further into his progression than other freshmen, especially with his speed out of the back field.

Presley is a budding young star who showed his abilities in the Cowboys’ bowl game with a three-touchdown performance. Presley will have an increased role and more opportunity to showcase his talent. What Presley lacks in size, he makes up for in speed, elusiveness and route running.

It’s no secret Johnson possesses elite speed, but he has questions about his catching and route running ability.

Martin didn’t get as much playing time as expected in 2020 but has size and ball catching ability on his side as his top attributes.

When he received targets, Carter showed promise to be an offensive weapon for the Cowboys, but he also has solid blocking ability to help the run game.

Springfield saw his first action in 2020 and provided a solid blocking piece to the unit who settled in toward the back half of the season, especially in run blocking.

Sills moved to tackle from guard mid-season, but should move back to his true position and provide a great piece in the pass and run games as one of the top linemen in the conference.

Williams has not seen much playing time and his uncertainty is the biggest reason for his lower overall.

Godlevske transferred to OSU this semester after starting at Miami (OH), but like his competitor, Godlevske’s uncertainty is the main reason for his ranking.

Woodard learned on the fly in 2020 and showed talent, especially in run blocking, which opened up toward the end of the year.

When Anthony has been able to play he’s been a solid piece on the Cowboys O-line. Coming off of an injury and having to replace Teven Jenkins, Anthony will be critical for OSU. Anthony possesses size and ability to play guard and tackle and grow into one of the top offensive linemen on the roster.

Ford underwent knee surgery after going down during the Baylor game. His recovery will be one of the most important stories to follow in the offseason. If he comes back close to 100%, he will once again be one of the Big 12’s best pass rushers.

Lacy will have a greater responsibility as the leader of the line if Ford is limited but has the talent and leadership required to do so.

The Colorado transfer has a high ceiling but will need to prove himself in an elevated role on the defense.

Asi is in a similar situation to his partner on the interior of the defensive line: high ceiling but unproven.

Rodriguez is the leader of the defense. He’s a complete linebacker who is exceptional at run stuffing and can also be drop back in coverage. He added over 20 pounds of muscle, which helps him deliver devastating hits, but his speed and agility still make him lethal in an open field.

Harper is inexperienced as a starter, sitting behind Rodriguez and Amen Ogbongbemiga, but is quick and sudden when he is in the game.

Rodarius Williams was OSU’s biggest loss on defense, so Bernard-Converse will need to step up next season.

Holmes is the classic gambling cornerback who regularly makes plays or gets burned for a long gain, no in between.

McCalister made the biggest play of the season opener, breaking up Tulsa quarterback Zach Smith’s pass with a minute to play, and Cowboy fans will want to see more of that.

Sterling was arguably OSU’s best defensive player last season. He consistently made the biggest plays in the biggest moments. The definition of explosive, Sterling’s athleticism allows him to win matchups against the conference’s best receivers. He can also take down running backs behind the line of scrimmage when he is used as an extra blitzer.

Harvell-Peel is one of the highest-rated defensive players, he’s as an aggressive tackler and absolute ball hawk.

Hale was one of the top kickers in the conference before an injury took him out for the season early, Hale’s accuracy and power provide a solid option in the kicking game.

Presley showcases elite speed and elusiveness and provides the Cowboys with an explosive returner.

Look at OSU’s Ring of Honor and say Thomas shouldn’t be here with a straight face.

Blackmon was OSU’s greatest receiver in a long list of greats and had one of the best two-year stretches in the history of the sport.

A close second to Blackmon, Bryant was considered the best receiver in the nation and a Heisman contender before he was ruled ineligible in his final season as a Cowboy.