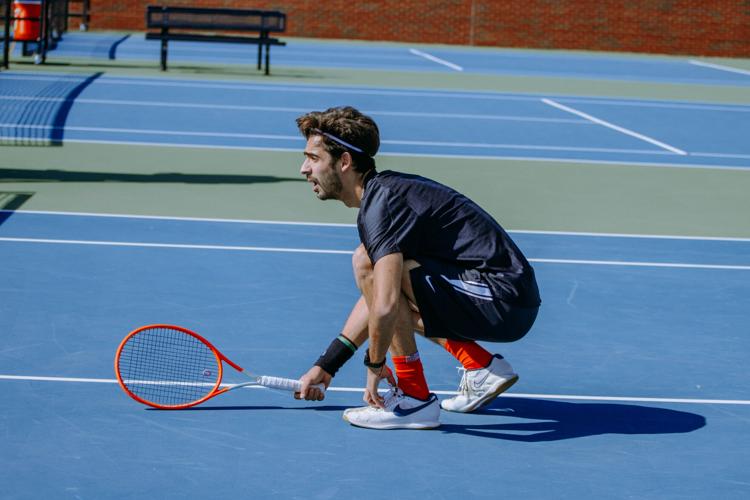 OSU tennis player Alex Garcia was one of three players to transfer from Baylor to OSU this offseason. 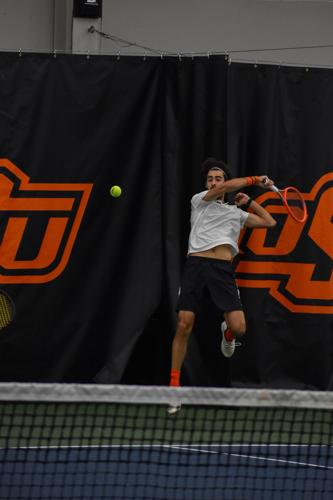 OSU tennis player Alex Garcia was one of three players to transfer from Baylor to OSU this offseason.

Alex Garcia has helped build a professional and welcoming culture.

Garcia transferred to Oklahoma State from Baylor after the 2021 season. In his brief time at OSU, Garcia has proved himself on the court as one of the Cowboys’ most reliable tennis players.

“I came here in January, so it was my first semester with (coach) Dustin Taylor,” Garcia said. “I feel like the first few weeks we improved a lot. We didn’t play that much but, I feel like every week I’m getting better and better. I feel comfortable with the coaches and the team. We are a whole new team and I feel like the environment practicing in is really good. I feel myself growing every week in and out.”

Garcia reflected on how much of an impact Taylor had on his decision to transfer to OSU.

“I feel like coach Taylor was one of the biggest reasons why I came here,” Garcia said.

Garcia has been a valuable player on the Cowboys’ roster, leading them to many victories in the 2022 season in singles and in doubles. Since his arrival in Stillwater, Taylor has been impressed by Garcia’s ability on the court, and what he brings to the Cowboys tennis team.

“With Garcia you know what you’re going to get day in and day out,” Taylor said. “He is very consistent. He owns his game and owns his shots. He competes really well. He’s a tough matchup for everyone and he can play with anybody in the world.”

Taylor is not only impressed by Garcia’s play on the court but also the person he is off the court.

“He’s a great student and great teammate,” Taylor said. “He comes from a great family back in Spain. He is a levelheaded guy. Garcia is well beyond his years wisdom-wise. That’s a lot of the time what you get with the Europeans. They’ve been traveling since they were 14 on their own. They tend to mature a little bit earlier than a lot of Americans at least. I’d say Alex is one of the most mature juniors that I have come across in my time.”

Garcia has helped build the team up in any way he can. When Garcia’s former teammate, Sebastian Nothhaft, entered the transfer portal, Garcia took initiative to recruit him to OSU.

“I remember the day I reached out to them,” Nothhaft said. “I was about to enter the transfer portal. I asked them what their thoughts were on different universities they talked to, and obviously they just committed to OSU, him and Joseph, and I talked to them a lot about their overall first couple months, about the university, and they spoke very highly of coach Taylor, and that really encouraged me to follow in their footsteps.”

Nothhaft is grateful he reunited with Garcia, and shares what is special about his teammate.

Bringing Nothhaft to OSU was huge for Garcia, because Joseph Chen and Garcia were able to complete the trio they had at Baylor the previous season. Garcia reflected on what it’s like to be able to bring his teammates into a new environment for them all to thrive in.

“It’s been really nice,” Garcia said. “We had this situation at Baylor with this extra year where I feel like we should have played, but our lineup was really good. There were 14 really good guys on the team, so it was really tough to get on court against really good teams.”

Garcia arrived at OSU to help improve his tennis game, but he puts the team before himself. Garcia’s goals with the Cowboys are to help the program improve in any way he can.

“Obviously getting ranked, and getting into the tournament,” Garcia said. “Every goal I have here is basically as a team. Trying to get to the NCAA Tournament. For myself, improving my tennis and trying to get better, and my goal is to play this summer in pro tournaments.”

Garcia said he is fortunate to be able to represent OSU on and off the court.

“It’s great to have the pride,” Garcia said. “You see other teams: wrestling, basketball, all the sports are really good. It’s always an honor to represent such an organization like this in every aspect.”

Garcia gives OSU credit for being a wonderful place for him to take his talents. He said what makes playing at OSU great, and why he wants to give it his all as a tennis player.

“The fans, the environment, and the people are really respectful,” Garcia said. “The facility is great. Every sport supports each other. Golfers come here, we go over there. It’s such a nice play to play. Great teammates and great people. Everything is great.”