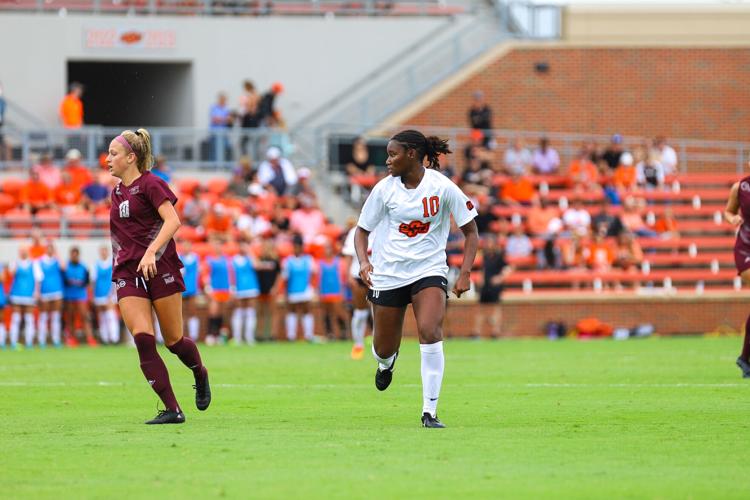 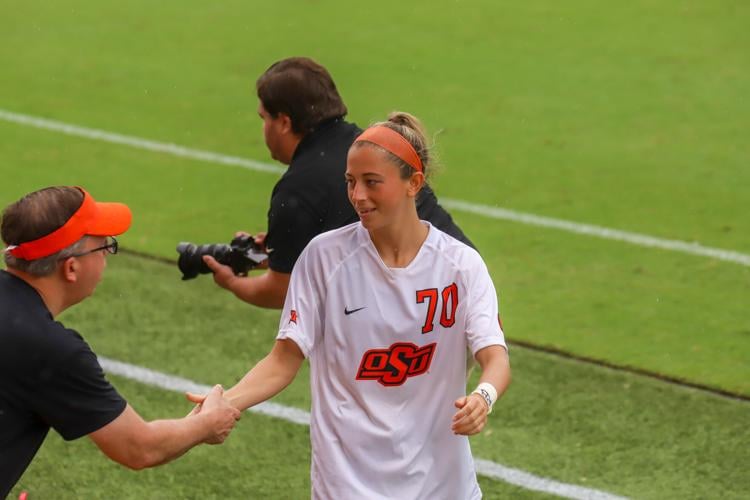 Blythe Beldner provides another set of legs at the wingback position for the Cowgirls, a position of need after key players' departure last season.

Blythe Beldner provides another set of legs at the wingback position for the Cowgirls, a position of need after key players' departure last season.

When the 2021 season ended, thousands of minutes of experience dissipated from the Cowgirl locker room.

There were plenty of familiar faces to work in, as well as new ones with loads of potential. Alex Morris, a junior, stepped up to wingback, senior Megan Haines also transitioned to the position, but transfers were important in helping replace those minutes.

Blythe Beldner, a senior transfer from Missouri who started every match for the Tigers the past two seasons became an immediate reinforcement at the position. She played 270 minutes in the first four contests and provided experience at wingback.

“Blythe coming in has really helped a ton,” OSU coach Colin Carmichael said. “She came in and she’s very, very fast, dynamic. Fits our system well. So, that’s been huge.”

Even with returning talent and promising incoming freshmen, a need to bridge the gap between seasoned veterans who know the system and the freshmen existed. So, bringing in experienced talent from the portal helped provide more comfortable depth.

Back out at midfield, another transfer, Niah Johnson of Mississippi State, has been a mainstay on the field, playing 296 minutes so far, sixth most on the team.

“Both of them (Beldner and Johnson) have hit the ground running,” Carmichael said. “…The transfers have definitely helped. It’s not they’re new, but they’re experienced, so there’s not that sort of learning curve that maybe the freshmen are going through.”

There’s plenty of talent on that part of the field with senior Grace Yochum, as well as freshman Xcaret Pineda, who has seen fair amounts of action.

But it’s the additional leadership of Johnson that made her beneficial to bring in. Self admittedly, she said she was a leader on that MSU team, which carried over to Stillwater.

“Niah, she’s so composed,” Carmichael said. “She brings leadership, she gets on the ball, she slows the game down for us and creates tempo… Having Niah step in there and play big minutes, I mean she’s just such a composed player.”

When Beldner and Johnson transferred in, they were looking for a meaningful role. The proposition of starting on a historically consistent team was appealing to them, and having more experience was welcomed by the Cowgirl coaches.

Even Eryka McIntyre, another senior transfer from Missouri, who started 36 matches for the Tigers, made plays right away. At the end of the Tulsa match a week ago, McIntyre subbed to stiffen-up the defense in a tight match, and Carmichael raved about her defensive play.

This Cowgirl team is a blend of experienced seniors, numerous freshman with a talented future and key transfer players with droves of minutes in their history.

“We (transfers) are kinda the tweeners," Johnson said. "(Freshmen) can ask us about here, they can ask about other schools and they can ask the older players. It’s kind of just being the bridge and trying to mesh everyone.”

That’s the idea of bringing in transfers. Bringing in talent to fill gaps left behind that are still dealing with younger players undergoing development. The Cowgirls’ transfers have been immediate assistance to help stouten this team.

“Any time you get kids that have played at a high level at any D1 program, it’s gonna translate to our conference,” Carmichael said.