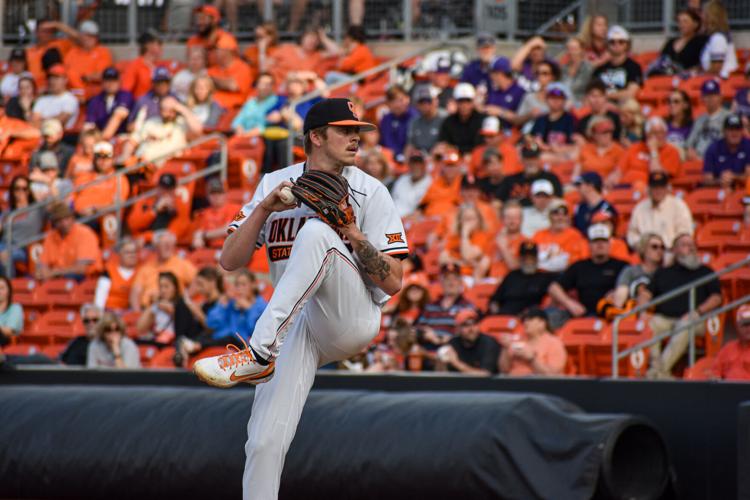 OSU's ace, Justin Campbell, locks in throughout his starts. 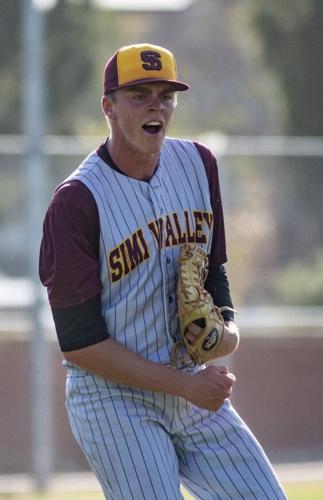 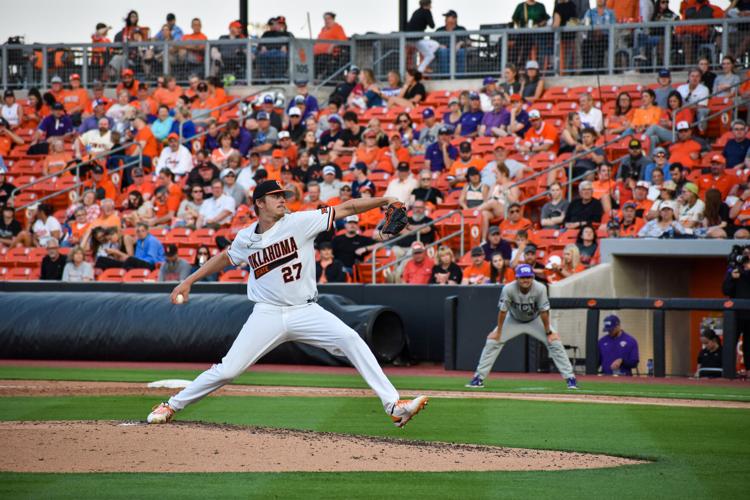 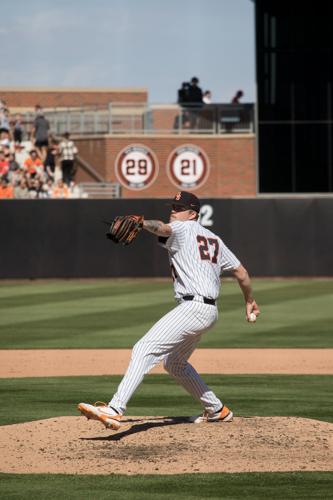 OSU's ace, Justin Campbell, locks in throughout his starts.

Justin Campbell paces in front of the lockers, music pumping through his headphones. Footsteps follow the rhythm. His coat’s hood drapes over his head. It reminds his teammates of this routine. Don’t talk to Campbell. He’s entering the zone.

“I’ll just say in my head that no one is better than you,” he told OSU Max. “They shouldn’t be on the same field or even the same batter’s box.”

That’s the routine, hours before the Cowboys’ ace throws his first pitch on a Friday night.

That glimpse into Campbell’s competitive nature can be viewed on Friday nights. In front of a posse of scouts armed with radar guns and clipboards, his draft stock rises. According to MLB.com, Campbell is projected as the 33rd overall pick to Baltimore in the 2022 MLB Draft. But it’s Campbell’s emotion and competitive nature that distinguish himself from his skill.

Campbell strives for pressure. He seeks high-level competition to improve. At times, when Justin allows an opponent to put his pitch in play, he blurts profanities.

To his teammates, he’s known as Derek.

The legend of Derek began a year ago. Campbell’s father, Jeff, laughs as he tells the story.

“Justin was getting into his mode,” Jeff said. “He just puts the face on. Doesn’t want to talk to anyone but that’s usually for all pitchers.”

Before a game, Garcia and his teammates like to keep the mood light. They’ll joke with others. An attempt to ease pregame nerves. Justin embraces the pressure. He walked toward Garcia with an emotionless expression. No smile. Just pure intensity.

“I’m like, ‘Oh my goodness, did something happen at home or what’s going on?’ Garcia said. “I walked up to him and I was like, ‘Hey, man, what’s going on? Are we good to go?’ He just said, ‘I’ve never been more ready in my life.’ I didn’t need him to say anything else. I knew exactly what was going to happen. He went out and he delivered one of his better games.”

Friday nights are Derek’s time. The nickname’s origin traces back to Justin’s favorite movie, “Step Brothers.” In the film, Derek Huff, the main antagonist, is the successful younger brother of Brennan Huff. Derek flaunts his wealth by owning helicopters and driving luxury cars. Brennan, 39, is unemployed and lives with his mother. Derek rarely jokes. He always attempts to one up his brother no matter how embarrassing the moment may be.

Justin embarrasses hitters. He strives to be the best on his team.

“Everybody looks at Derek as such a bad guy in that film,” Garcia said. “Yeah, in the grand scheme of things he probably is but if you look at Derek’s intensity at a daily level, Justin’s is matched or if not surpassed that in a good way.

But the nickname is temporary. Friday nights are Derek’s time. Since the nickname, Justin evolved into a two-faced pitcher with a million-dollar arm.

Off the mound, he’s the opposite of intense.

“It’s literally two different people from when I pitch and when I’m not pitching,” Justin said. “I’m a complete goofball when I’m not starting or not on the field.”

On the field, his motives are simple. Strike opponents out and win. The simple act of striving to win powered Justin throughout life.

In his youth baseball days, Justin sought out difficult competition. Jeff, who played junior college baseball, coached Justin until he entered high school. He wanted to share a love for baseball with his son.

“Justin was an athlete from the get-go,” Jeff said. “I made sure he had a ball and a bat in his hand right when he was out of the womb.”

His introduction to T-ball resulted in a net outside the fences of the ball fields. It became known as the Justin Campbell net.

“He was hitting bombs on the T-ball field to the point where they had to put up a net because he would hit into the street when cars are going by,” Jeff said.

In 2013, Justin participated in a try-out for the first Team USA 12U squad. A major issue developed.

He battled a 102-degree fever with a high flu and all of the related symptoms. His mother, Traci, drove him nearly three hours to the event in San Diego, California. When Justin stepped onto the field, his fever didn’t matter. Justin refused to miss the opportunity. He excelled against the best 12-year-olds in the country and earned a spot on the national team. Even at his worst, Justin proved his elite status.

"He did that feeling like the worst ever,” Jeff said. “Even at that point, he still competed and did amazing. Right there, I just knew that he was gonna be something special.”

Consider it Justin’s version of the Michael Jordan flu game.

“Any family games that we would play, he had to win, man,” Jeff said.

When Justin was 12, the family gathered at the kitchen table for a game of Uno.

With the game nearing an end, he held a card. Uno. One more to win. Suddenly, a card morphed into several. A several turned into dozen. Justin’s giddy feelings dissolved into frustration.

He couldn’t settle with defeat.

“He threw the cards down and walked out because he had the game won,” Jeff said. “We were all laughing. He got so mad because we were laughing.”

The hunger to win applies to anything in Justin’s life. Table tennis, poker and video games.

Despite decades on the job, Cowboy coach Josh Holliday said he hasn’t coached a competitor like Justin.

“He’s one of the best competitors I’ve ever coached,” Holliday said. “I don’t know of any better.”

After a strikeout, Campbell unleashes primal screams. He’ll kick the air, pump his fist and slap his glove. Seconds later, he returns to the dugout in silence.

His teammates, like catcher Chase Adkison, recognize the passion.

“He competes like no one I’ve ever seen,” Adkison said. “He’s always bringing that energy. You can hear him mess up. When he throws a ball where he doesn’t want it…. Sometimes the kids shouldn’t hear it, but his bullpens are the same way. He misses a spot. He’s mad at himself and he’s ready to throw that next pitch.”

After receiving the ball from Adkison, Justin stares toward the batter’s box, glove covering his mouth.

Justin’s eyes fixate on Adkison’s glove. He operates on a pitch-by-pitch basis.

“You can’t really focus on anyone else besides what’s going on at the plate,” Justin said. "Sometimes I don’t even focus on the hitter. I just focus on the glove and drive through the target. Have that killer mindset and just focus on attacking and winning at all costs.”

Justin’s confidence is contagious. It infects everyone in a Cowboy jersey.

He doesn’t confuse the feeling with arrogance.

“If you show confidence on the mound, then the hitter is gonna see like, ‘OK, I gotta step up my game, too because he’s gonna come back pretty good,’” Justin said. “If you don’t have confidence, you’re not gonna have your stuff.”

Justin leads the Big 12 with 133 strikeouts. No other Cowboy pitcher collected more than 77 strikeouts.

“He’s a freak,” Phansalkar said. “Not only mentally, but physically. He’s as dialed in a pitcher as I’ve seen here in college, and I’ve watched OSU for a long time.”

Justin’s fiery emotion is only part of his advantage. He’s far from being the only pitcher that can chuck 98 mph fastballs. The velocity and his meticulous attention to detail results in a high strikeout rate. He finds a way to separate himself amongst some of the nation’s toughest competition.

His constant pattern of competing against top competition allows him to reach a new level.

A roster spot on Team USA throughout the years created a self-confidence in Campbell.

“He was always one of the big kids on the team and very talented but that can only go so far if you’re not playing up to your competition levels,” Jeff said.

His emotion adds an intimidation factor. He’s thrived at high levels. He looks to do the same in the big leagues.

“I think the fire that he pitches with is a rare skill, Holliday said. “Some people don’t function well when they get quite to that point where they’re on edge. The edge takes him to the next level.”