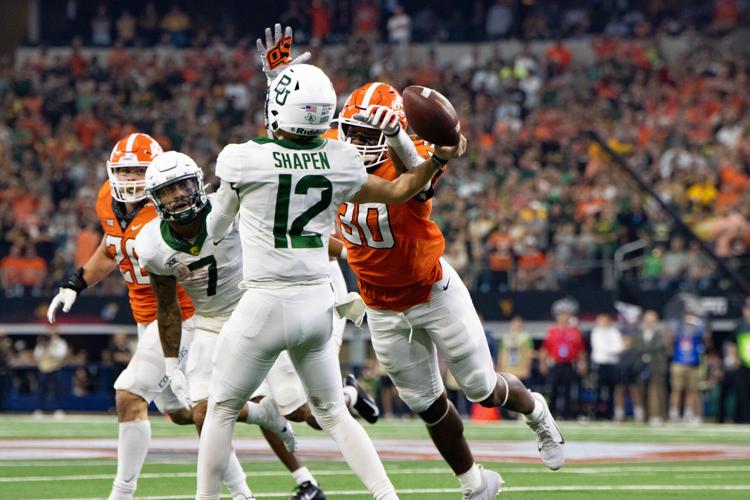 A year removed from the Big 12 championship, Baylor quarterback Blake Shapen (No. 12) is no longer an unknown for the OSU defense.

A year removed from the Big 12 championship, Baylor quarterback Blake Shapen (No. 12) is no longer an unknown for the OSU defense.

The Cowboys left the field heartbroken the last time they played Baylor.

Saturday, Big 12 play will start, and OSU will get a chance to break hearts in Waco.

The Baylor Bears (3-1) already have a conference win, a 31-24 triumph against Iowa State this past weekend. The Cowboys sat idle on a bye week, preparing for the rematch of the Big 12 Championship.

Cowboy coach Mike Gundy said minus safety Jalen Pitre, a second round NFL draft pick, the team he will face Saturday isn’t too different from the team that handed him a 21-16 defeat in December.

“There's a lot of similarities and their concepts are the same,” Gundy said. “Not a lot of personnel changes other than they had the safety that was a really really good player that's not there anymore. A couple of skill kids on offense but they look essentially the same scheme wise. Quarterback is back and now obviously got more experience than when we saw him, but same group.”

The same may not be a good thing for the Cowboys.

In the Big 12 Championship, Baylor quarterback Blake Shapen torched the Cowboys. He completed 23-of-28 passes for 180 yards and three touchdowns.

At the time, Shapen was relatively unknown. The game was just his third with more than two passing attempts. Now, Shapen has four starts this season and threw three touchdowns against ISU.

“So, as you know their concept offensively from an outside looking in is the same as it was in the championship game,” Gundy said. “So, you got to control the passing game. He might complete 14 passes in the game, and it may only be for 75 yards. Three or four of them might be converting third downs. So, I don't really see a lot of difference and it looks like they've programmed him in that direction. You know until they play action, max protect and try to throw your head.”

Possibly Baylor’s most impactful player is 6-foot-4-inch 358-pound defensive tackle Siaki Ika. Ika was a force against the Cowboys in 2021. Gundy specifically addressed the way he disrupts offensive rhythm by pushing linemen back into the play.

“Well, he’s an issue,” Gundy said. “He’s a problem. He should be playing on Sundays right now, so we definitely have to know where he’s at on the field.”

The plan to stop such a dominant player is surprisingly simple.

“That's what we told (the offensive linemen), we'll give you guys help sometimes, but sometimes you're going to have to hold your own,” Gundy said. “And he's going to make some plays. You're not going to stop him from making plays. But we need to make our share of plays against him."