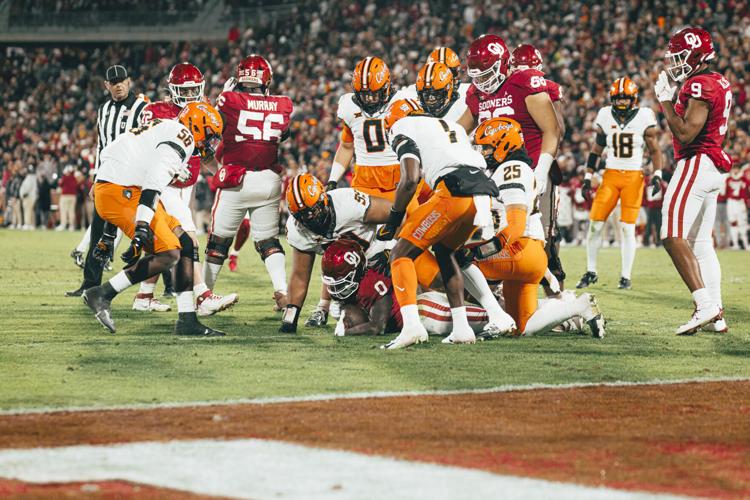 OSU missed out an opportunity to defeat the Oklahoma Sooners in one of their worst seasons based on regular season record. 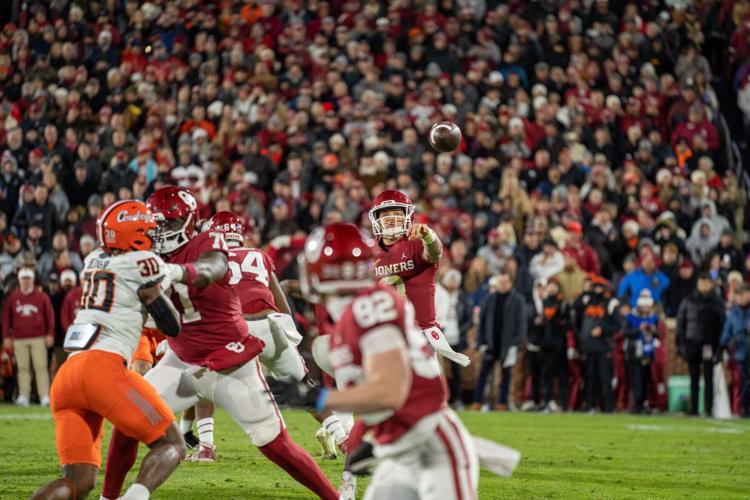 OSU missed out an opportunity to defeat the Oklahoma Sooners in one of their worst seasons based on regular season record.

NORMAN — Shortly after settling into his seat for the postgame press conference, OSU coach Mike Gundy looked down at the printed box score.

For thirty seconds he talked about time of possession, penalties, punts without taking his eyes off the chart. When he finally looked up, his assessment was complete.

“Now that I’ve scanned it, it pretty much comes down to turnovers,” Gundy said.

OSU had a perfect opportunity to kick the Sooners while they were down, but after Oklahoma’s 28-13 win, the only thing the Cowboys are kicking are themselves.

Oklahoma entered Bedlam 5-5 and reeling from two consecutive losses. OU was unranked and fighting for bowl eligibility, something normally wrapped up by week six.

Things weren't so dreary in Stillwater.

It looked like quarterback Spencer Sanders heroics a week ago in a comeback win against Iowa State had re-energized the Cowboys. He practiced more this week than he had in previous weeks dealing with a shoulder injury.

Sanders had a chance to beat OU twice in a row for the first time since 2001-02 when Josh Fields quarterbacked the Cowboys. It was a chance to draw first blood against new OU coach Brent Venables and maybe the last chance at a win in Gaylord Family Oklahoma Memorial Stadium.

But when the Cowboys reared back to kick the vulnerable Sooners, Lucy yanked the ball away.

In Charles Schulz cartoon, Peanuts, Lucy isn’t an opponent. She is a teammate. Saturday, the cowboys cost themselves a rare chance at rubbing something in the face of their rival with four turnovers and ended up falling flat on their back.

Sanders threw four interceptions, something he hadn’t done since the 2021 Big 12 Championship game. The reason turnover-machine Sanders, a version many thought was gone for good, resurfaced again was the thing that has plagued the OSU offense all season.

“A lot of pressure, it’s hard to throw when there’s pressure,” Gundy said.

Every interception has a story, like the ball that bounced off OSU sophomore Jaden Bray’s hands and into the arms of OU’s Jonah Laula. And the miscommunication on the pass thrown down the right sideline to Bray that resulted in a head-scratching turnover.

“Everyone had their part in this,” OSU receiver Brennan Presley said. “I mean, I had the drop before the pick, so you could say if I catch that ball, we don’t throw that pick. So, there’s a lot of things that us personally, just as players, we want back, the interceptions, the drops, the missed assignments, blocking whatever it is.”

Gundy said his offensive line has been playing musical chairs, new people swapping positions every week. That combined with nature of playing from behind in a four-score game allowed the OU pass rush to register six sacks and trigger the mistakes that cost OSU the game.

“I mean, I’m going to go back to the turnovers," Gundy said. "The turnovers are really difficult, and that’s what happened.”

Now, the Sooners are standing back up and bowl eligible. With the rivalry headed for a certain pause, it may be a while before the Cowboys get another chance at the kick they missed Saturday.