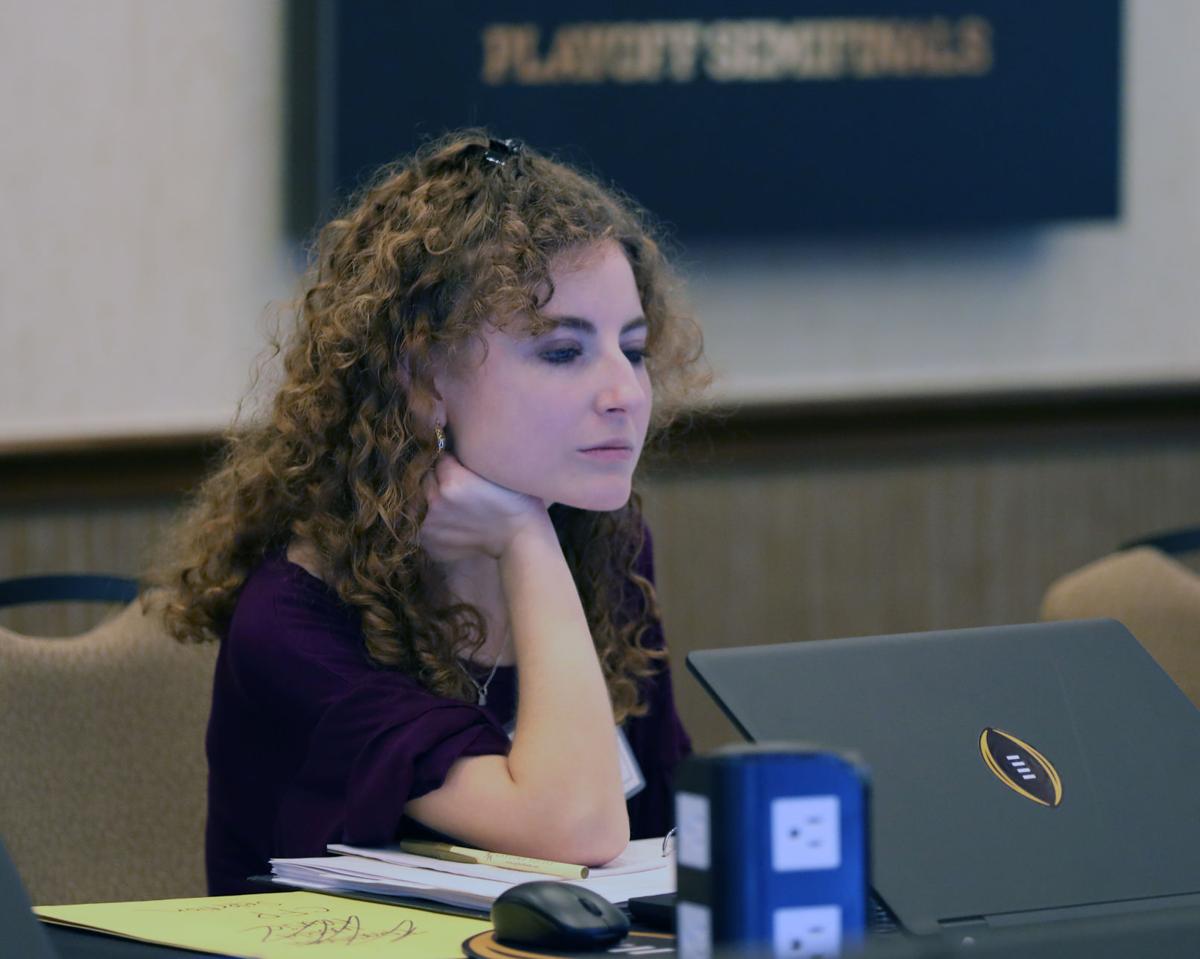 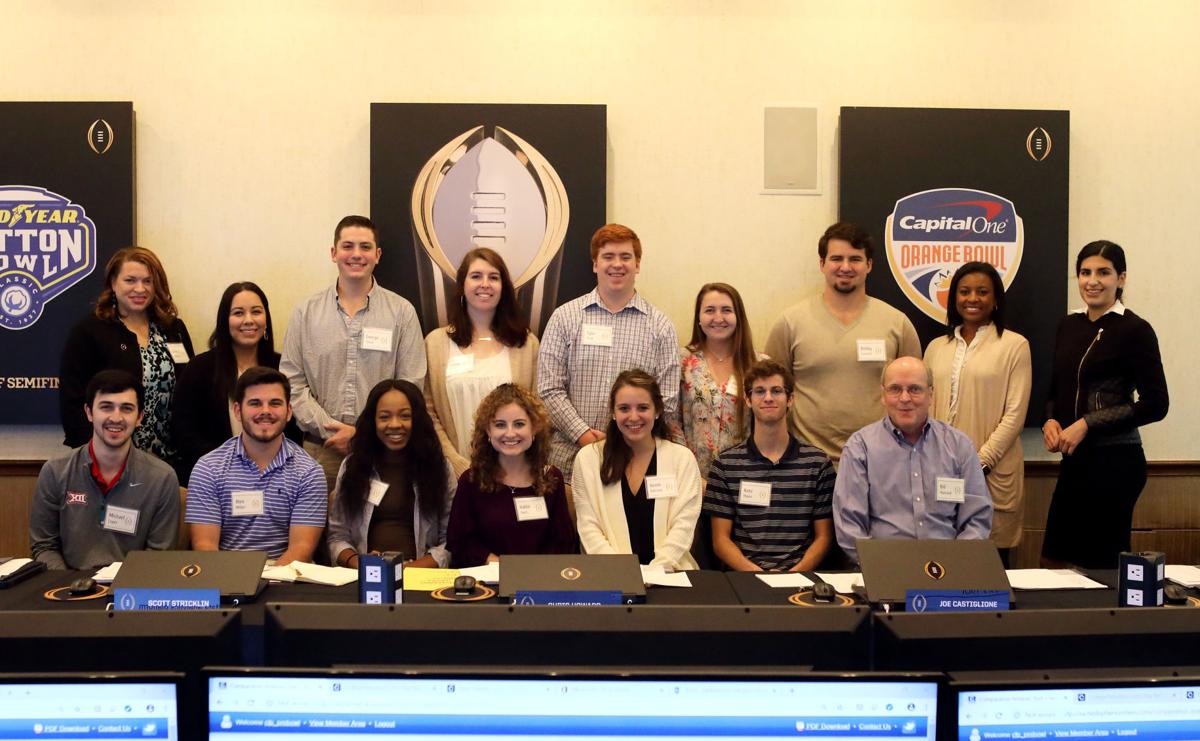 After nearly three hours of analysis and debate, we had selected and ranked only nine teams.

We couldn’t rush the process. The fates of the top college football programs in the nation rested in our hands.

Well, in reality, they didn’t. As soon as we left the room, our choices became meaningless unless we wanted to discuss them later with our family members and friends, something I was eager to do.

But it was easy to imagine otherwise because the event was so carefully planned to reflect the experiences of the College Football Playoff Selection Committee members.

I participated in the College Football Playoff Mock Selection on Tuesday in Grapevine, Texas. I joined 11 other student journalists from across the country as well as a group of College Football Playoff staff members and interns. We networked with amazing people such as executive director Bill Hancock, ate incredible food and sat in a room that faced the beautiful, expansive lobby of the Gaylord Texan resort.

When we stepped into the meeting room, we time traveled to the end of the 2013 college football season. To the people who saw my pictures from the event and skeptically wondered why we had Florida State as No. 1: that is why. It was the year Jameis Winston led the Seminoles to an undefeated season, not 2018.

I found my place at the table with a card in front of me that didn’t bear my name. As soon as the event started, I had to act as Chris Howard, one of the 13 members of the selection committee. He is the president of Robert Morris University, a retired Air Force reserve lieutenant colonel, a former college football player and a Rhodes Scholar with a master’s degree from Harvard.

I didn’t speak with the big, scholarly words that the CFP staff told me Howard uses, but I gained knowledge that changed my perspective of the selection committee.

I never had a bad view of it. But each year, when college football teams are chosen for bowls, I hear the usual complaints from some sports fans. It happens with anything that involves a selection process, whether it’s the College Football Playoff or the NCAA basketball tournament.

“So that (insert string of curse words here) team made the playoffs, but my (insert name of person’s beloved team here) didn’t?” infuriated fans say. “That just isn’t right.”

Naturally, people instantly direct blame toward the selection committee, just as they’re quick to call out referees when a game doesn’t go their way. They label the process as unfair or say someone was biased toward a team.

I’m not going to say the selection committee members are perfect because they aren’t. They’re human, of course, but after sitting in a meeting room for about five hours and intently analyzing sports statistics, I know we can't disrespect the committee or the fairness of the system.

The process is fascinating. After initially compiling our pool of 30 teams, we went through numerous voting rounds to choose teams to consider before we solidified the rankings. Thanks to technology, we could choose to compare any of the teams, and their statistics appeared side-by-side on massive screens in front of us. We could view up to four teams’ reports at one time. Green dots indicated the best in a category, while red dots marked the worst. How did Auburn’s offensive efficiency compare to that of its regular-season opponents? South Carolina defeated Missouri, but which team ranked higher in the strength-of-schedule column?

It’s almost like completing a logic puzzle, one of those problems where Mary has to stand in line behind Joe but in front of Tom, and Sarah is first in line, and you have to put them all in order. This is more difficult because there isn’t one correct way to rank 25 teams. The team that won more games had a significantly weaker schedule than the one that lost four. The team that had the strongest offense among four might have ranked lowest in the defensive categories. Where were we supposed to put UCF, a team that won its conference championship but had a fairly easy path to the title in the American Athletic Conference?

It’s a complicated task, but the committee strives to achieve as much fairness as possible. The recusal policy is enforced. If a committee member has a connection to a team, he or she must exit the room when that team is discussed and refrain from voting in that round. It doesn’t matter if the person is an athletic director, a professor or a parent of someone who works at that university. If there is any tie to the school, that committee member has no input.

This eliminates bias and protects the committee member from hearing “Why didn’t you put our school in the playoffs?” complaints from people at the university.

Nothing was hasty, and we made no decision without thorough discussion. At the end, we reexamined our list and discussed the possibility of taking re-votes between a few teams. We did, and four teams had new places, though our top four remained the same.

One of the re-votes focused on Alabama and Ohio State. The Buckeyes were one spot away from the playoffs.

Did they, instead of Alabama, deserve to reach the playoffs? The in-depth statistical analysis couldn’t help us reach a consensus.

When we voted again, we kept our rankings the same with the Crimson Tide at No. 4. Alabama was a better team with more skilled players, we decided. As Hancock wisely pointed out, it’s ultimately a human process, not a numbers process. We could mull over as many statistics as we want, but they didn’t hold the answers.

No matter the system, the selection committee can’t make everyone happy. Hancock mentioned how some people say they want an eight-team playoff, but that wouldn’t solve anything. There is always a team that falls just short of the cutoff. That change would just make fans of the No. 9 team disappointed instead of the No. 5 team’s supporters. There is no way to perfect something so complex.

But the committee tries its best to do so.

Although the mock selection was in-depth and realistic, I know it represented only a small sliver of the time the selection committee members spend on their tasks. They intently watch conference championship games in the meeting space and spend the entire season focused on their possible top-25 teams.

At the end of this football season, when the playoff teams are chosen, my mind will travel back to a meeting room in the Gaylord Texan. I’ll remember the meaningful advice from Hancock and his stories about traveling around the world to work at the Olympic Games. I’ll remember staring at screens for hours trying to decide which team had the better resume and enjoying every minute of the process.

I'll know the committee members ate in the same room we did, sat in the same chairs and used the same analytics system to help them choose their top teams.

And instead of wondering why they made the decisions they did, I'll think about how impressive their work is.