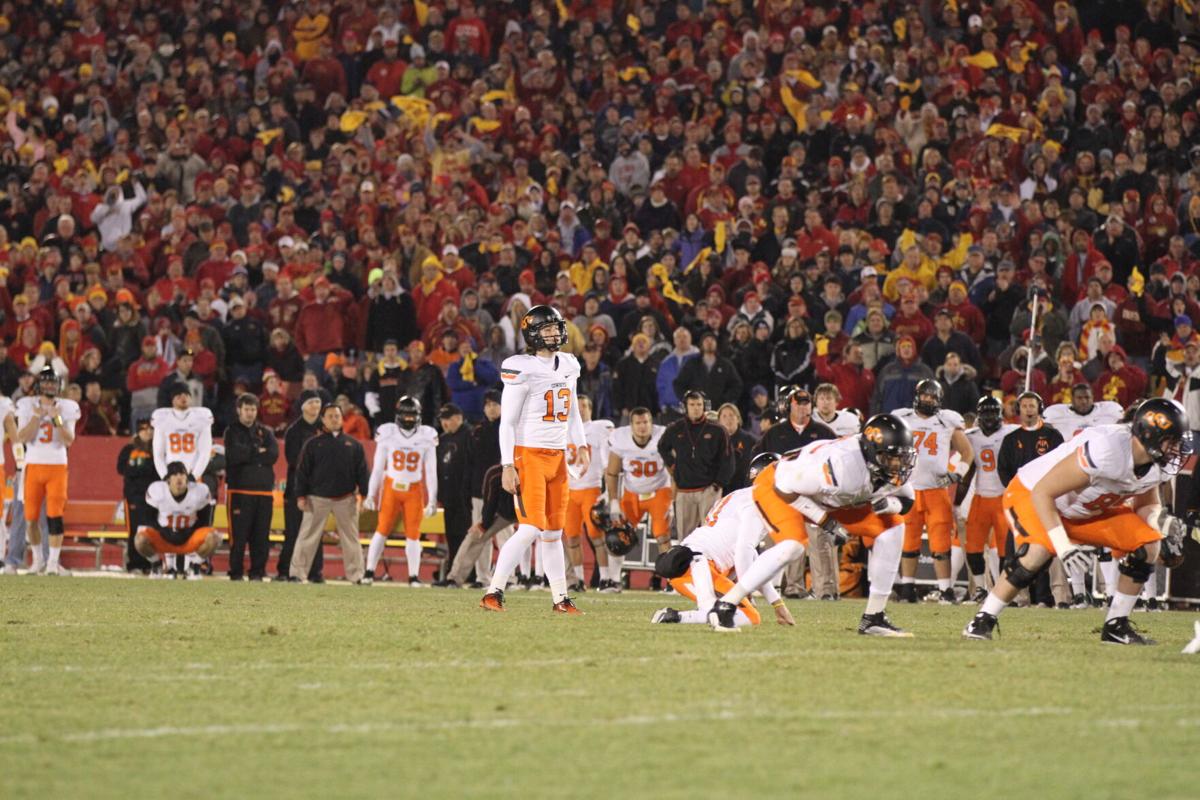 Quinn Sharp missed a go-ahead field goal late in the fourth quarter against Iowa State in 2011. 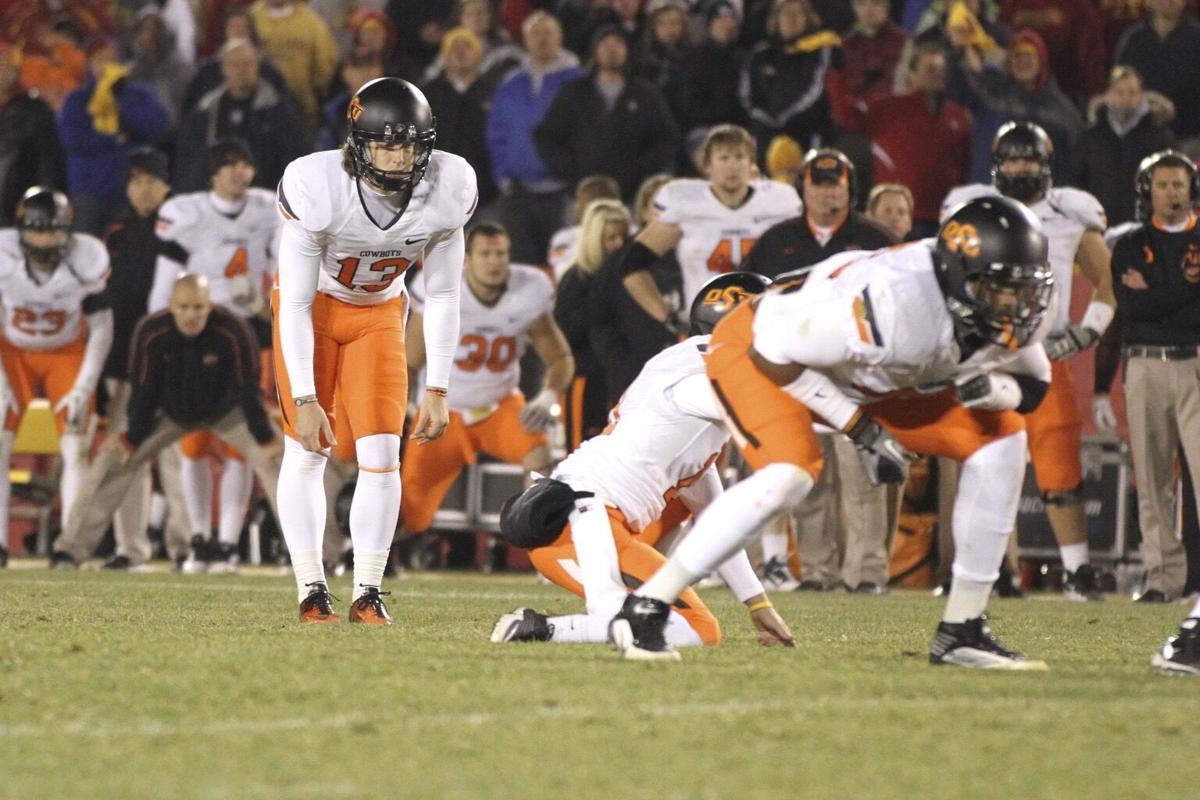 Quinn Sharp has been a solid piece to the Cowboys special team and the Cowboys entrusted him in Ames, Iowa to try and win the game.

Quinn Sharp missed a go-ahead field goal late in the fourth quarter against Iowa State in 2011.

Quinn Sharp has been a solid piece to the Cowboys special team and the Cowboys entrusted him in Ames, Iowa to try and win the game.

In the fourth installment of a seven-part series, The O’Colly is looking back at the 2011 Oklahoma State football season, widely recognized as the best season in OSU history.

Dave Hunziker was getting ready in his west Des Moines, Iowa, hotel room on the morning of Nov. 18, 2011.

O’Colly beat writer Brendon Morris was waking up after a night at Eskimo Joe’s preparing to remotely cover the Oklahoma State football game that night.

On the other side of the hotel door, OSU sideline reporter Robert Allen.

The news was the same— it was information that would bring the OSU family to its knees.

“I was in such shock… my mind wasn’t even functioning. The whole day was just bizarre,” Hunziker said. “For me I wanted to get home, I have to do my job, but I was looking forward to just getting home.”

In Stillwater, Morris was frantic.

“I was sprinting across campus at like 7:30 a.m. I just remember it being a surreal day,” Morris said. “It just kind of pinned a black cloud over everything.”

The players, back in Iowa, were just beginning their days. It was supposed to be a memorable one too. The Cowboys were set to take on Iowa State at 7 p.m. in an abrasive environment celebrating senior night.

However, as the Cowboy football players funneled into the hotel lobby they were met with the harsh news.

Some were already eating breakfast, others just waking up while sitting in the lobby with the TV’s turned to ESPN’s College Gameday. It was supposed to be a normal episode, but was instead focused on the devastating news out of OSU. The news of familiar faces seen every day at the training table had passed away.

“It was a night game,” quarterback Brandon Weeden said. “So we had to sit there with it in our hearts and minds. It’s hard to get excited, hard to get motivated, it was just a weird feeling I don’t really know how to explain it.”

Offensive lineman Lane Taylor: “It was difficult. It was weird. It was everything really.”

“Even if you didn’t know those coaches on a personal level,” defensive lineman Cooper Bassett said. “You lost a member of the Oklahoma State family. That adds an eerie element that takes away some of the excitement on a morning before the game.”

The news hovered over the heads of the Cowboys. They had to wait a grueling 12 hours to play an important late season football game.

After having to contemplate the news all day it was time to get on the buses and head to Jack Trice Stadium. On the way to the game one of the OSU buses broke down.

“Our whole pregame ritual, we kind of pray before the game and everything, that was thrown off because only half the guys were there,” Taylor said. “It was almost set up from the beginning that we were going to lose that game.”

Another setback before the game even started.

“It was a Friday night game, so you’re out of your normal routine, it was their senior night, if they won they were bowl eligible,” Bassett said. “We had Bedlam coming up for the Big 12 Championship, there were a lot of elements that kind of gives you the perfect storm for a trap game.”

Despite the emotions, the game was not postponed –– even though some thought it should be.

“It was a weird day, a sad day. That game, even more than the Tulsa game, I wish we could’ve found a way not to play it,” Weeden said. “Move it back a day or something, but it is what it is.”

Walking onto the field was challenging, but business had to continue and the Friday night game was on.

“They came out and hit us in the mouth. They played well, we didn’t,” Weeden said. “If I could take back any game in my 37 year-old life, if I could do one over, it would be that game.”

When the game kicked off the Cowboys jumped out to a 17-7 halftime lead. Even with the lead, the game didn’t have the same feel as the typical 2011 Cowboy team.

In the second half, Iowa State began its comeback powered on turnovers from the OSU side. With 5:30 left in the fourth quarter, the Cyclones knotted the score at 24 on an Albert Gary 7-yard touchdown reception.

On the ensuing drive a moment happened that stings the minds of the team, the coaches and OSU fans.

With 1:21 remaining the Cowboys offense at the Iowa State 20-yard line, coach Mike Gundy trotted OSU kicker Quinn Sharp out to attempt a go-ahead field goal from the left hash.

All that stood in the way of OSU and the lead was the 37-yard field goal, one that the players all had faith would be made from their talented kicker.

The kick left the foot of Sharp, it was tracking toward the right upright, and it was high.

The officials began frantically waving their arms signaling the kick was no-good, to the shock of Sharp who pleaded that the kick went through.

“Yes, to be honest that field goal went through,” running back Jeremy Smith said. “You never want to leave the game in the hands of the refs. Never.”

To the disbelief of the Cowboy sideline the game remained tied.

“I still say to this day Quinn Sharp made that kick,” Bassett said. “You can’t tell me that field goal wasn’t good.”

After two overtimes Iowa State landed one final gut punch to the Cowboys undefeated season, one that still haunts the minds of the team.

All the Cyclones needed was a field goal to end the game, instead Jeff Woody ran in a four-yard touchdown to give the Cyclones the 37-31 victory over the No. 2 Cowboys.

“Yes, it was good. I watched it myself,” Taylor said. “I watched it and was like, ‘that’s good.’ Then they waved it and I said, ‘You’ve got to be kidding me.’ That shows you even how good this team was. That was the worst game we’d played all year and we had five turnovers in that game and still took it to double overtime.”

The Iowa State celebration was on.

“I still lose sleep over it every once in a while. It’s one I’d like to have back,” Weeden said.

“Just a weird night an ugly night, no excuse then. We were a great team and great teams have to overcome adversity, and we didn’t in that moment,” Bassett said.

The Cowboys magical season had its first flaw. The Cowboys had to face the loss head on because they had just one regular season game left. A home game against hated in-state rival Oklahoma and it was for the conference title.

The Cowboys bowed up and were ready to move on with blood in their eyes.

“It put a bad taste in our mouths,” Bassett said. “We were pissed off and ready to kick the s--- out of Oklahoma.”