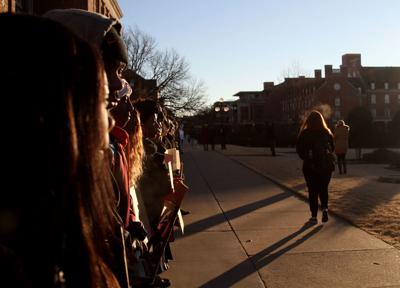 Lorretta Young said, “In silence – and in self-defense, I figured things out in my own little way.” This statement alone largely embodies my educational journey.

I am the bi-product of a predominantly white institution (PWI), and I am currently attending my second PWI (Oklahoma State University) to receive my third degree. During my time as a student at both institutions, I have learned and internalized one overarching idea and four prominent lessons: I am a Black woman - if I want something I have to go get it. I have to be my own advocate; these spaces were not created for, or with the intent of me attending, and I will inherently be misunderstood. I have, and I continue to sit in spaces in which I am the anomaly and my silence is preferred. I have even heard convincing arguments in which my experiences have been invalidated because they are unlike anyone else’s in the room.

This opinion piece was not created with the intent to bash PWIs. Instead, I hope to shed light upon the journey of Black female students, or any other minority students of color, who are burdened with the duty of consciously, strategically and intentionally navigating the spaces of PWIs. I cannot speak to the experiences of all those who inhabit similar identities, but I can explore and detail mine.

Over the course of 5 1/2 years I have experienced four black-face incidents, countless [macro]aggressions (I refuse to undermine these experiences down to anything "micro" any longer) and three racially-charged social media posts at two different institutions; just to name a few racially-insensitive acts. Yet, all incidents have resulted in one response. And we all know what that response is: the apathetically generic email sent from the president's office. You know, the one that implies that the behaviors being confronted are "not reflective of the university." Although, at this point, it seems as if it is reflective of these institutions, especially when you consider they are recurring events on these campuses (and campuses across the country). It is no longer a matter of not "controlling the behaviors of specific students," but instead, it is a campus culture issue - one that universities are refusing to acknowledge. Even in the age of "colorblindness” and "diversity and inclusion," we are lacking pieces of equity and social justice.

However, to avoid going down the long and never-ending rabbit hole of diversity politics and engaging in the 'oppression olympics,' I have found ways to cope, or rather survive.

I have been forced to learn how to grow wherever I am planted. At the most disparaging times, I have learned to flourish, even though they have tried to bury me. In the classroom, my intelligence and experiences have been put into question and my history has been whitewashed. In the work place, my speech and presence has been deemed problematic, “intimidating," unprofessional and requested to be minimized. In offices, my existence has been limited down to mere statistics, and a ploy of the larger institutions' "diversity" agenda, And on sidewalks, my appearance alone has been viewed as a rebellious act.

These institutions taught me first-hand how to mobilize my grievances - through academic success, the creation of support groups, peaceful protests and demonstrations, through personal journals and leveraging myself professionally. I have learned to work "twice as hard," excel under pressure and trust my instincts. I make it my business to speak up when others cannot find the words to express themselves (even if my voice is shaking), to sit at tables that we would not be invited any other way. I have learned to pull others up as I go higher, and I have made it my personal duty to pour into, push and encourage our most vulnerable students.

However, contrary to popular belief, these PWIs have not been life-changing catalysts within themselves, but it has been my burning desire to thrive and flourish despite every reason not to, that is was has sustained me.

As I reach the end of my academic journey, as a Master’s candidate, I reflect on all the experiences I have survived as a Black woman in academia. I recall my undergraduate advisor telling me I should “Aim lower” or seek schools that are "not so big” or “competitive” as OSU (regardless of the fact that I had a 3.6 grade point average at the time and was very involved in campus); or, when a professional here told me that I should partake in an institutional initiative because “diversity is ‘in’ right now." Or, when I heard administrators say that, “This is just how things are” (in response to racial incidents on campus); or, being in spaces where dodging conversations of racial injustices are common due to its “divisive” nature instead of building bridges through communication; or, when I’ve had white men tell me to “shut up” for “ruining” their communities while using my voice; or, being questioned and targeted for speaking out against racial injustices and inequities in my professional roles; or, even sitting through hours of curricula in which we are painted as victims or simply non-existent, rather than the survivors and ingenious people we are.

This piece is not to bash or expose, but rather to speak to my lived experiences and those who share similar identities as me. Furthermore, it’s written with the hope to inspire those around me, and to speak to our innate resilience as a people. We have rarely ever been given what is necessary to survive, yet we manage to do so anyway. Through it all, I have found solace in my PWIs and pride in the skin that I navigate them in. As Black History Month is in full swing, I am reminded of Nancy Randolph Davis, who was denied admittance twice at OSU, and later became the first African-American enrollee in 1949. I can only imagine what she endured, but I am grateful she did, because of her, I can. And I too, will graduate May 11, as she did from Oklahoma State University with her Master’s degree.

“You may encounter many defeats, but you must not be defeated. In fact, it may be necessary to encounter the defeats, so you can know who you are, what you can rise from, how you can still come out of it.” – Maya Angelou

Hailey Robinson is in her second year at Oklahoma State University. She is studying Campus Student Development and will complete her masters spring 2018.