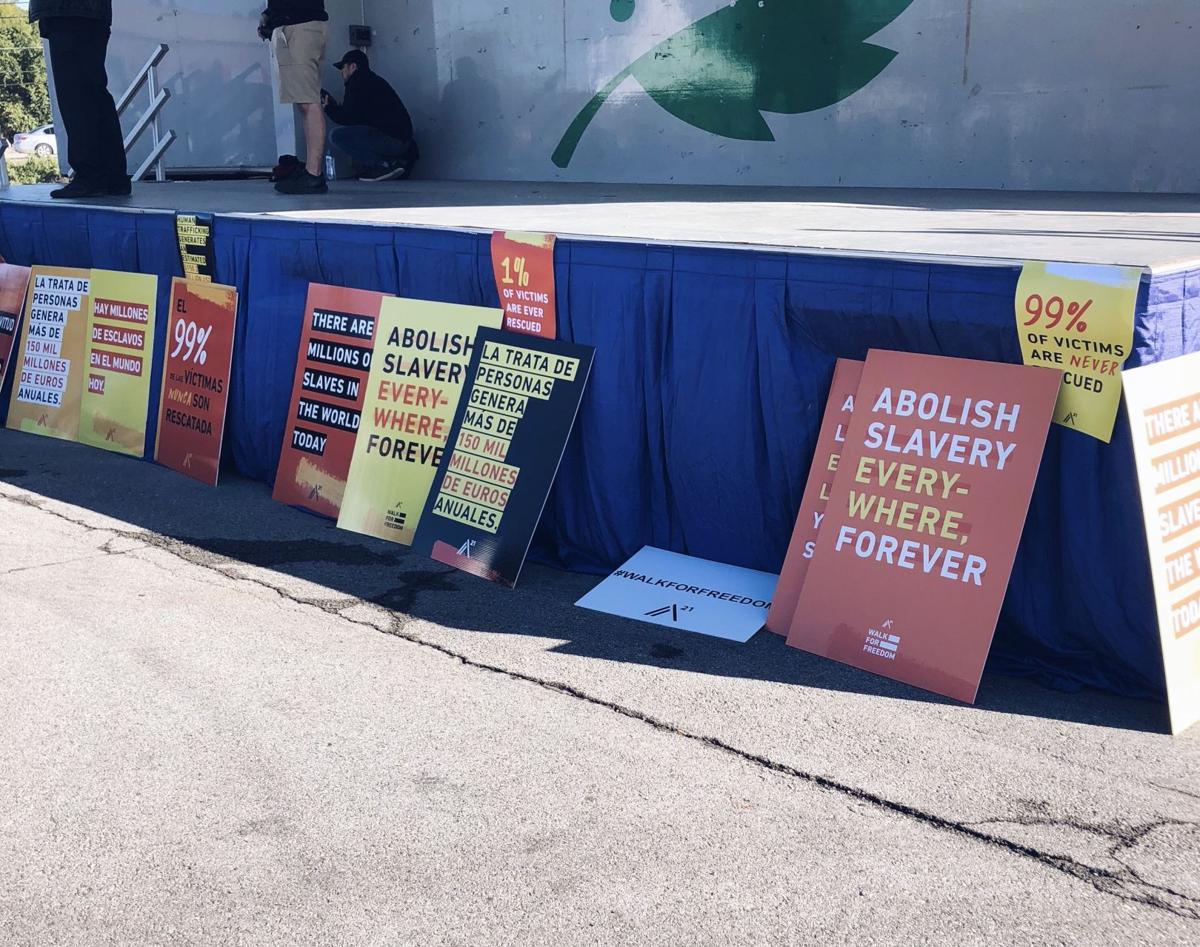 Human trafficking awareness signs were on display on Oct. 17 in Tulsa, which was one of the 450 cities set to have a Walk For Freedom event. Two hundred people showed up to support the cause and fight for freedom. 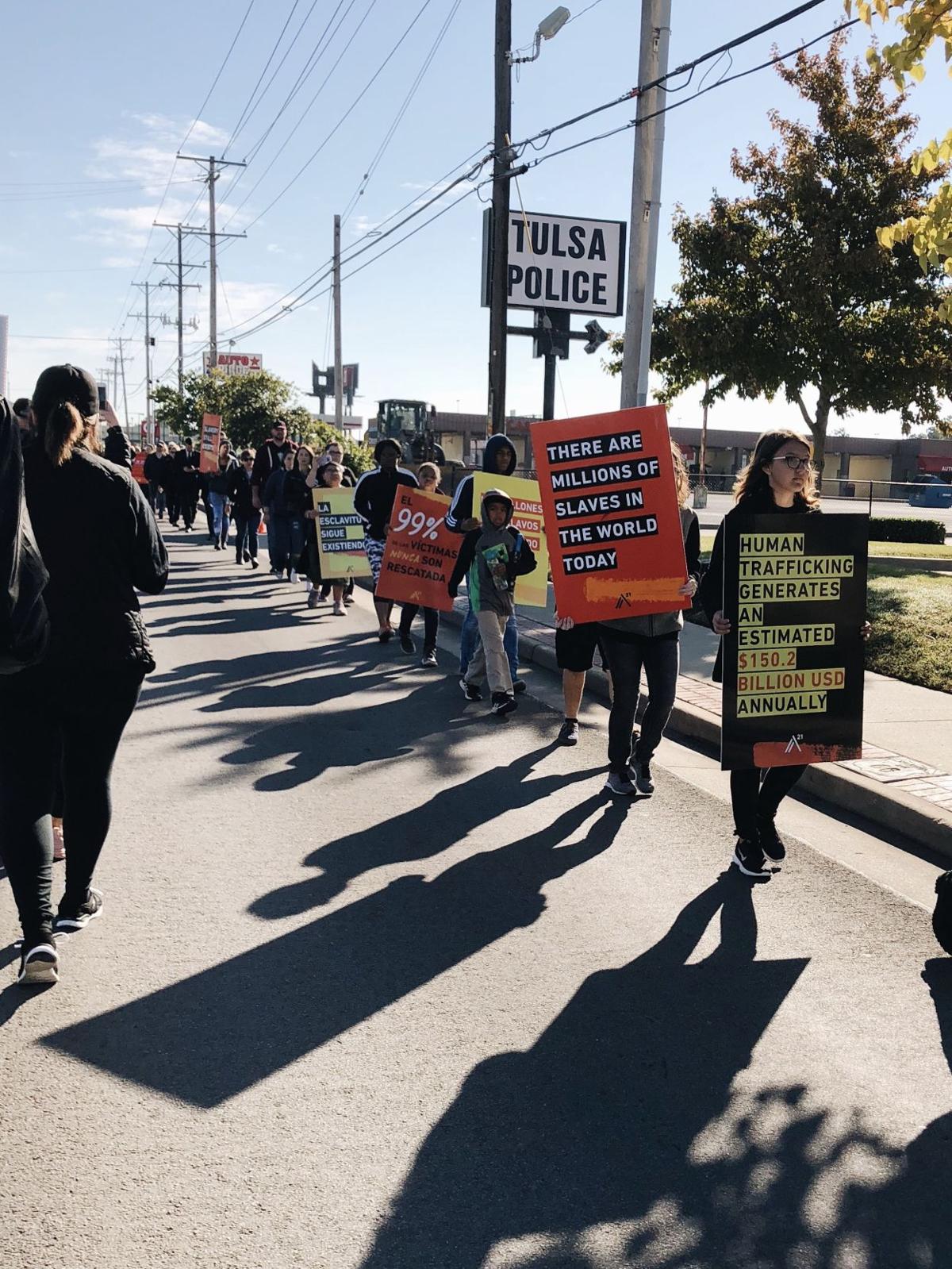 Volunteers organized the Walk For Freedom event in Tulsa, and hundreds of people rally to walk and raise awareness and fundraise.

Human trafficking awareness signs were on display on Oct. 17 in Tulsa, which was one of the 450 cities set to have a Walk For Freedom event. Two hundred people showed up to support the cause and fight for freedom.

Volunteers organized the Walk For Freedom event in Tulsa, and hundreds of people rally to walk and raise awareness and fundraise.

A21 is a nonprofit organization that fights for a world without slavery. This organization works around the globe to rescue and restore hope to victims.

I learned about A21 after listening to Christine Caine give a speech at my old church. Caine founded A21, and the way she spoke about this movement to end modern day slavery inspired me to become involved immediately.

Every year, A21 hosts the Walk For Freedom in cities and countries around the world. Volunteers organize the walk in a city, and hundreds of people rally to raise awareness and fundraise. Tulsa was one of the 450 cities set to have a Walk For Freedom event Oct. 19. Two hundred people showed up to support the cause and fight for freedom.

Walk For Freedom 2018 was my second year walking in Tulsa. The locations of the walk were different, but the atmosphere and passion were the same. Everyone at the walk cared about the mission, and the people came together to form a single-file line and walk through Tulsa in unity to combat human trafficking.

“I knew bringing the walk to Tulsa would get the community involved on a larger level,” Weinkauf said. “I knew it would spread awareness, educate, equip and empower people to stand up and get involved.”

Weinkauf said she did not not hear a lot of people talk about human trafficking, and not many believed slavery was a problem.

Slavery exists. It should not be ignored any longer. Children are held captive and forced to perform acts to survive. Traffickers sell victims, ignoring the victim’s health and humanity. Victims are objectified and dehumanized for cash. These illegal acts are happening in Oklahoma. We should care about this issue, and more important, we should care about the people this issue affects.

With the help of Denni Blum, an Oklahoma State University professor and A21 volunteer, and the Rev. Mareo Johnson, the master of ceremonies for the event, Weinkauf was able to see the people of Tulsa become educated on human trafficking.

Blum found out about the Walk For Freedom through the Anti-Human Trafficking Tulsa Task Force. Blum is on the committee to organize the walk each year, and she also teaches a class at OSU on child sex trafficking in schools.

Before the walk started, Blum went around to several businesses near the walk’s location and talked to the employees about A21. She asked the businesses to inform customers about what was going on, invited people from the bus stop and began conversations with anyone who was willing to listen.

“There is a lot of education that is going on and a lot of awareness that is being raised beyond the walk itself, just as a result of putting on the walk,” Blum said. “There is a lot of uncounted numbers that have benefited from this walk.”

Johnson said education is vital, not only with adults, but also with children in schools, so the students will have more of an understanding of human trafficking and what signs to look for.

Because of the power of social media, it is easier than ever for a trafficker to find a child to traffic. Kids will get on social media, complain about school or parents, and traffickers can message those kids, persuading them to run away from home and start a new life.

“Parents also need to know what’s going on with human trafficking because we need to be looking out for our children,” Johnson said.

As a pastor, Johnson said he is passionate about people being free in all areas of life. He said as awareness increases, he hopes to see human trafficking decrease in the city.

“It is important we all come together and lift our voices for those who have been silenced so they can be set free,” Johnson said.

Raising awareness brings hope and inspires action. Thousands of people around the world are walking to put an end to slavery and support the right to freedom. A21’s Walk For Freedom gives Oklahomans the chance to make an impact in their neighborhoods. In an age when solidarity is rare, the Walk For Freedom stirs people to stand together and bring hope to the community.

“What you are seeing at the walk is a result of all the work that has already been done and is still being done,” Weinkauf said. “It is going to take all of us to come together to end human trafficking.”

Educating yourself on the signs of human trafficking can save a life. Donating to an anti-human trafficking organization can help victims once they are rescued. Volunteering time, fundraising, and even posting a picture on social media to raise awareness helps the battle.

All of us, students, teachers, parents, should do what we can to fight for those who have lost their freedom to human trafficking. Together, we can use our voices to raise awareness and do what we can to help abolish modern day slavery.