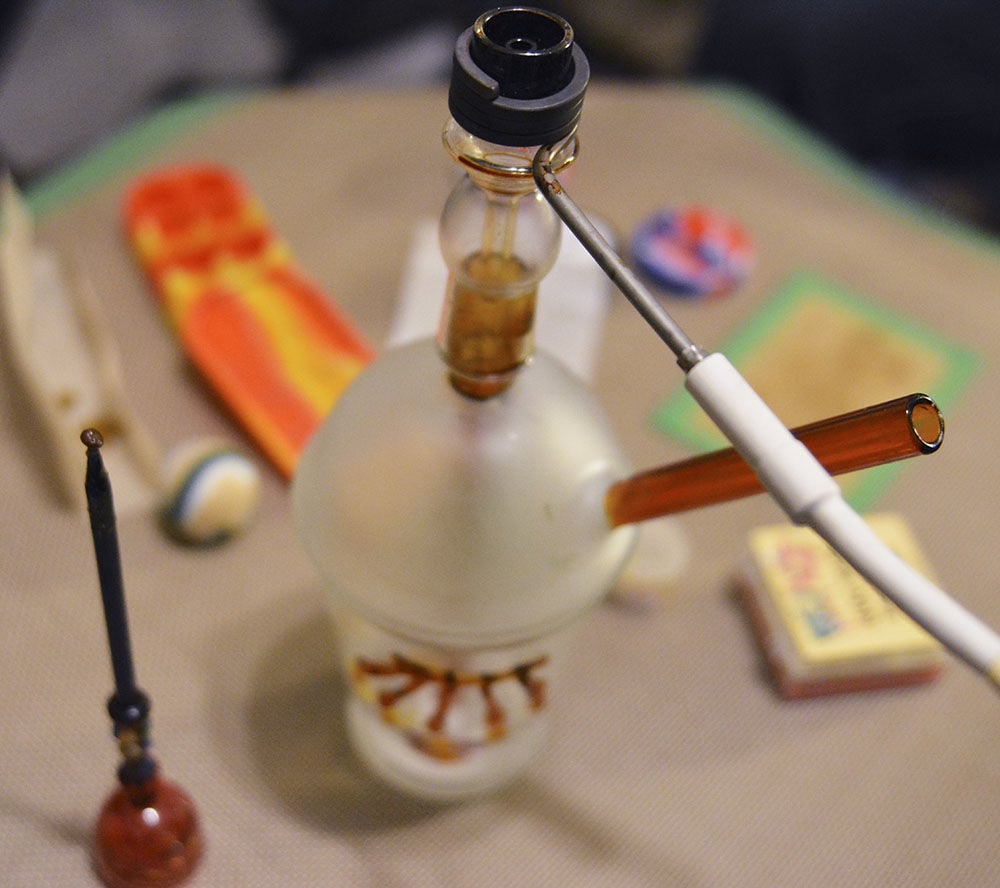 Common ways to consume dabs include using pens similar to an e-cigarette or glass oilrigs made only for smoking concentrates. 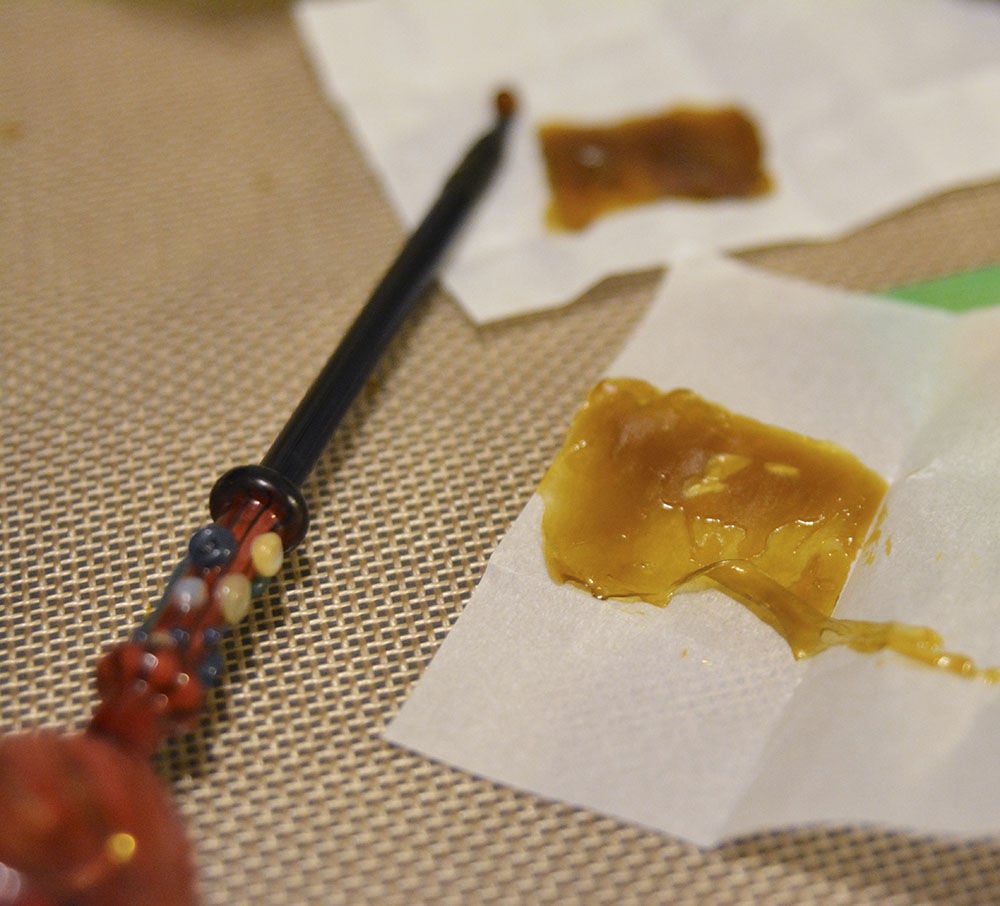 Dabs may be defined as butane hash oil, a substance from a marijuana plant that is concentrated into an oil or wax to be smoked.

Common ways to consume dabs include using pens similar to an e-cigarette or glass oilrigs made only for smoking concentrates.

Dabs may be defined as butane hash oil, a substance from a marijuana plant that is concentrated into an oil or wax to be smoked.

Editor’s note: About one in 20 students use marijuana on an almost daily basis, and in 2013 almost 36 percent of college students said they used marijuana in the past 12 months, according to a study conducted by University of Michigan scientists.

Drug use among college students has been on the rise since 2006, and as marijuana use increases it seems so do the methods in which students obtain their high. With marijuana legalization continuing to spread across the country, the following story takes a look at a newer form of the drug in the Stillwater community.

The first time JD took a dab — a concentrated form of marijuana — he was behind the wheel of his pickup truck on a weekend road trip with three other passengers.

"Maybe two hours into the trip, I think we'd smoked a little weed," JD said. "I saw my friend with a torch and I was like 'What the hell is goin' on back there?'"

By the time JD's friend offered him a dab while driving, his curiosity had piqued.

JD's friend, John, an Oklahoma State student, fired up a butane torch, heated up a rig similar to a bong and carefully dropped a pebble-sized piece of golden-colored wax, a dab, for JD to inhale.

"It was really good,” JD said. “It tasted amazing.”

Moments later, the potency of dabs began to weigh on JD, making it progressively more challenging to concentrate on the road.

"It was kinda' freaky at that point because I was trying to drive and trying to maintain focus," JD said. "It was new, and my nervous system had never been exposed to that much THC at one time."

JD, an OSU alumnus, was hooked.

"I fell in love with dabs and pretty much stopped smoking weed altogether," JD said.

Among users of the newest trend for smoking weed are many different street names, ways of consumption and motives behind consumption of concentrated marijuana, or dabs.

OSU police officer Colt Chandler said regardless of names, all forms of marijuana are treated the same in the eyes of the law.  In the Oklahoma Statutes, all parts of the plant, whether growing or not, are listed under the definition of marijuana.

Dabs may be defined as butane hash oil, a substance from a marijuana plant that is concentrated into an oil or wax to be smoked. The cannabis plant undergoes many chemical extractions that separate the THC — Tetrahydrocannabinol, the chemical ingredient behind marijuana's "high" — from the plant matter.

There are many different strains of marijuana plants and various methods of extraction, resulting in numerous different types of dabs.

"Concentrates, which would be resin or extracts of the plant, would be considered marijuana," Chandler said.

Concentrated marijuana is most commonly consumed using a water pipe with a nail attachment and other parts, collectively called a rig.

"It's called a dab because you dab the wax onto the hot nail," John said.

John said other common ways of consumption include using pens similar to an e-cigarette or glass oilrigs made only for smoking concentrates.

Many people who consume dabs often choose to do so for two primary reasons: They find marijuana wax a healthier alternative than plant material, often referred to as bud, and because it is more powerful than bud.

"You take the weed through a chemical process that isolates the good stuff," JD said.  "Dabs are so much cleaner and so much lighter in the lungs."

Although JD said he believes dabs are healthier than smoking marijuana, there is no research to support it.

Justin said comparing dabs to weed is like comparing liquor to beer, one is noticeably stronger than the other.

"I haven't had any problems probably because I've smoked weed for a long time, but I could see how if you just started you could absolutely get couch-locked," Justin said.

While conventional plant marijuana typically contains 15 to 20 percent THC, dabs are around 50 to 90 percent THC.

Greg, an OSU student and regular weed smoker, said he sees dabs on the Unseen app, an anonymous photo-sharing app, all the time. Based on rumor alone, Greg said he would have to feel extremely comfortable to even try a dab.

"It's like taking eight hits at once because it's concentrated," JD said.

Heather, an OSU student, said she has taken only a few dabs because she does not find the incapacitating kind of high enjoyable.

"With smoking it's easier to measure out what kind of high you want to achieve," Heather said. "With dabs you don't have any control."

Heather said if someone who had never smoked weed before were to take a dab, they would never want to try marijuana again.

"Even one dab puts me at a place where I can't function," Heather said.

"If I dab too much, my tolerance will go up for the plant matter," Justin said. "I gotta be careful. I like to keep my tolerance down for money reasons."

Consumers often reach even further into their pocket to shell out money for equipment.

"I have spent a few pretty pennies on the equipment," John said.

JD says though it's pretty expensive, most of the people who smoke dabs are already connoisseurs of marijuana.

"You already step in, and you're willing to spend money," JD said.

Although dabs seem new to Stillwater, they have already established a reputation nationwide — and it is not squeaky clean.

Failed attempts at cooking butane hash oil in kitchens are being held responsible for a number of home explosions across the United States, not unlike crystal Methamphetamine, according to an article on dabs from CNBC.

Accompanying dabs' reputation is an underlying concern over the chemical process marijuana undergoes during the extraction process and the contaminants in the butane itself. The way the marijuana is grown, the part of the plant utilized and the age of the plant can all play a role in the safety and health of the final product of dabs.

"Some people don't make it right, and it still has residual solvents in it which can be bad for you," John said.

Dabs are fairly new to Stillwater, being slowly introduced to the town beginning in 2010,John said. Dabs began growing in popularity among marijuana smokers in the U.S. between 2008-2010, according to marijuana.com.

There is not a substantial amount of research on the production dangers and health consequences dabs pose.

"It definitely has some sort of effect, I just don't think we know yet," JD said. "It's not healthy for people to think you can do as much as you want, everything has consequences."

Possession of dabs, or any other form of marijuana, can certainly hold legal consequences.

Despite the hype, students expressed a resonating fear and constant concern for the potential consequences of their illegal activity.

"I won't have any in the car but I will see the police, and I start to freak out," JD said. "It's always in the back of my mind."

Chandler said possession of marijuana or paraphernalia can be discovered through a traffic infraction or from what campus police labels a "call for service," when they are called and alerted of a marijuana odor or other concern.

"We respond and investigate as usual, if there is an origin or place of origin we can identify we will determine whether we need to get a warrant or if we can get consensual search," Chandler said. "A consensual search can be verbal or with a written document."

If a person is found in possession of marijuana or its extracts, they can be subject to a misdemeanor or felony charge for the crime.

"A misdemeanor can be up to a $1,000 fine or up to a one-year imprisonment in a county jail," Chandler said. “A felony can be more than that."