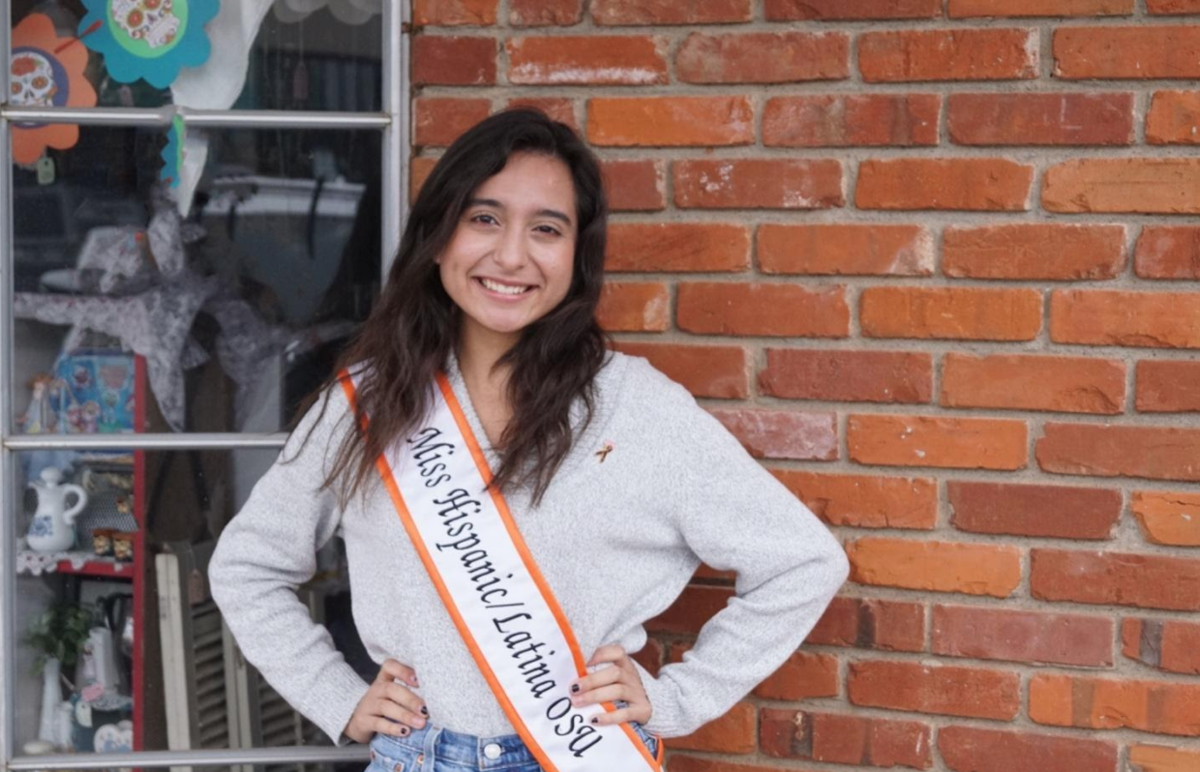 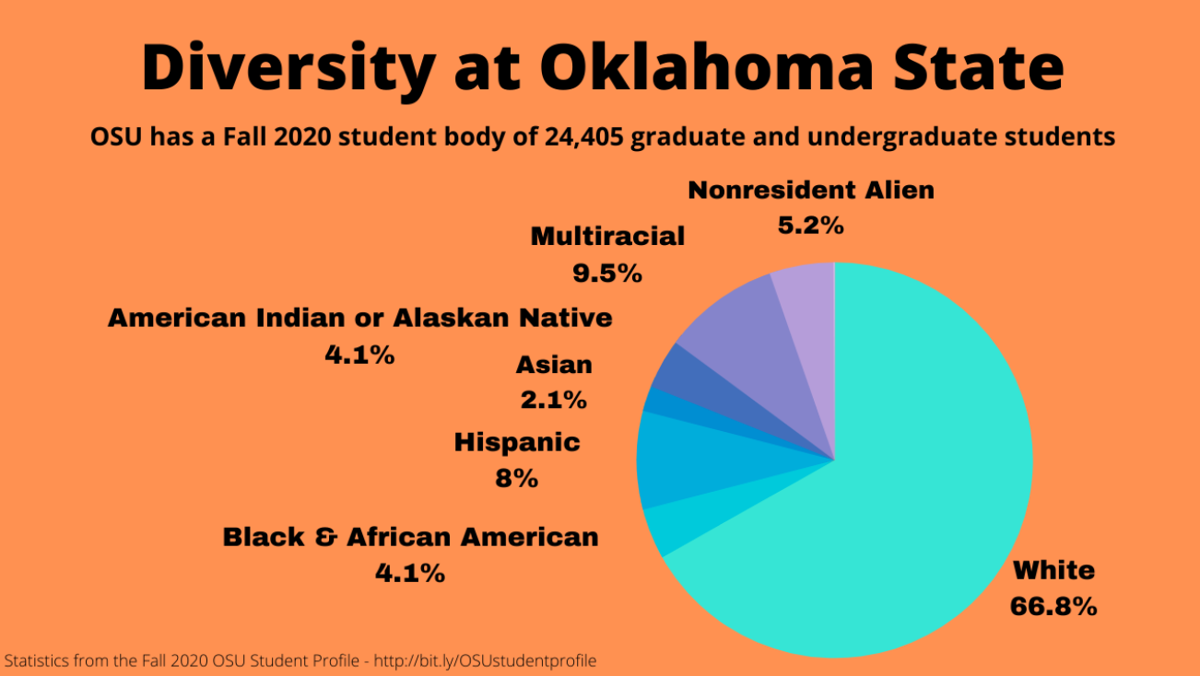 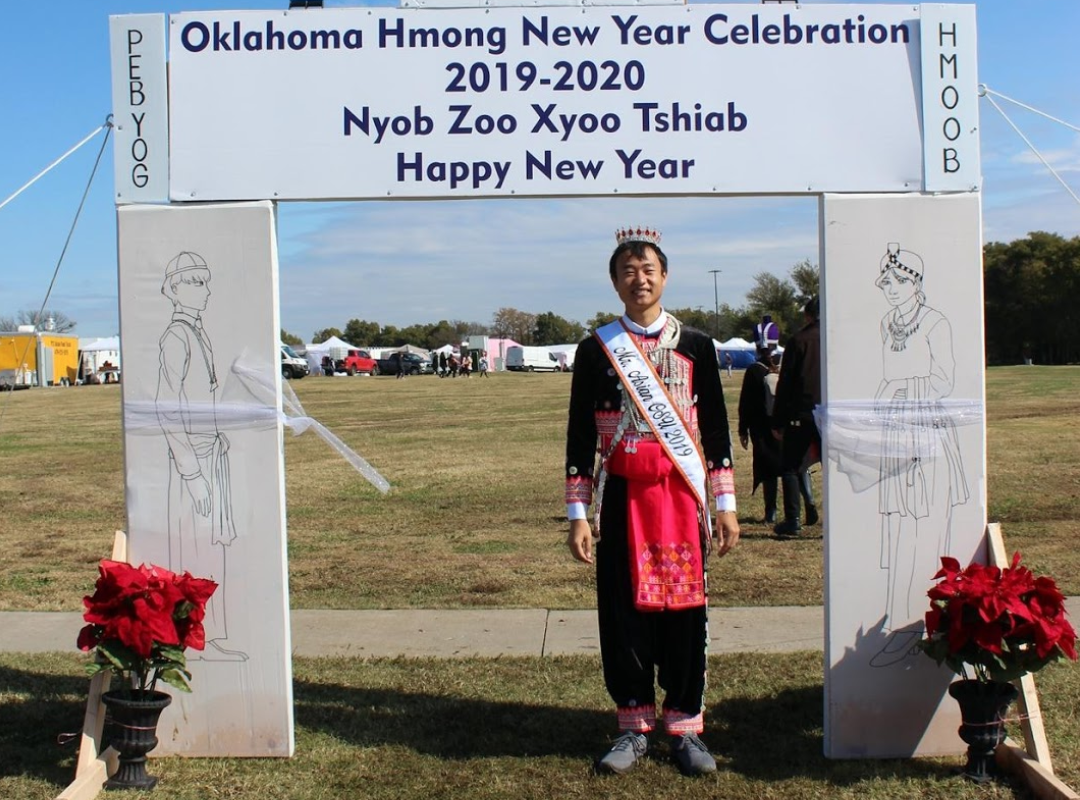 As Kassandra Gaona stood in front of the audience in Oklahoma State University’s Student Union Theater, freshly crowned Miss Hispanic/Latina OSU, she couldn’t help but be proud of how far she had come.

Just a few years earlier, Gaona would have never imagined herself participating in a pageant, let alone one intended to show off her heritage and culture. The pageant had taken up a large part of her life for months, so she was understandably pleased that all her hard work had paid off.

But more than that, she was proud of how far she had come as a person and young Hispanic woman. For a long time, Gaona was ashamed to be Hispanic.

“For most of my life I tried to hide the fact that I was Hispanic and Mexican because I was scared people would say [something] to me,” Gaona said. “I worked really hard to get rid of my Hispanic accent that I used to have when I first learned English and to try to fit in with the ‘normal white people.’ I got as Americanized as I could, which is really sad.”

Gaona grew up in Oklahoma, but her family is from Guerrero, Mexico. Her parents immigrated to the United States about 22 years ago, and she grew up speaking Spanish and practicing Mexican traditions at home. But she was a different person in public.

Gaona had heard stories from her parents about how they were treated badly for speaking poor English and had seen how some people were treated for simply being Hispanic. In her high school, the Hispanic students were considered “the ghetto kids” who were dumb and troublemakers. She wanted to distance herself from all that as much as she could.

That changed when she came to OSU. Her freshman year, she took her adviser’s advice and enrolled in a Spanish class, and the professor offered extra credit for attending OSU’s Spanish Club. She made friends at Spanish club, and they helped change the way she saw herself and her heritage.

“Just spending time with my friends who thought Hispanic culture was amazing, it made me realize, ‘Man, I’m stupid,’” Gaona said. “Seeing how much they admired the culture and the people and stuff, it made me realize that I was being dumb for being ashamed of where I came from.”

Those friends eventually led her to the Hispanic Student Association where she was introduced to the Mr. and Miss Hispanic/Latinx OSU pageant. The pageant was an opportunity for Gaona to embrace her culture in a way she never had before, and now she proudly promotes and displays her heritage.

Hispanic students make up 8% of OSU’s student body, making the Hispanic community the second largest minority group on campus. Now, as Miss Hispanic/Latina OSU, Gaona is one of the leaders of that community. She said she hopes to use her role to promote diversity on campus by bringing more visibility to Hispanics and Latinos in the OSU and Stillwater area, and she wants to be the role model she didn’t have for students who still struggle to accept their heritage the way she did.

Wanting to be a role model for others is something Ricardo Cortez can relate to. Cortez is Mr. Hispanic/Latino OSU 2020, and he is also Mexican American. Unlike Gaona, Cortez never felt ashamed to be Hispanic. He grew up in Tulsa, and his family made regular trips to visit relatives in Mexico, so he always felt connected to his Mexican heritage and the Mexican community in Tulsa.

Cortez said he had great role models growing up, but as a first generation college student, he said he didn’t have any Hispanic role models to help him navigate the world of higher education. Now, he’s trying hard to be that role model for his younger family members, and he said he recognizes that as Mr. Hispanic/Latino OSU, he is now a role model on campus, too.

“It’s kind of weird being on the other side after the pageant because that’s where the real work is done,” Cortez said. “So like, the events you have for your platform and basically just being that role model.”

Cortez’s platform is financial literacy in the Hispanic community. He wants to use the resources provided to him by the Mr. and Miss Hispanic/Latinx OSU pageant to help other Hispanic students and members of the Hispanic community learn about the resources available to them so they can achieve their goals. He hopes that it might increase the number of students not just at OSU but other universities as well.

Like Gaona, Cortez wants to help promote diversity at OSU, and they aren’t the only ones.

The university holds several different cultural pageants each year, including Mr. and Miss International OSU, Mr. and Miss Black OSU and Mr. and Miss Asian OSU. These pageants are opportunities for students to educate people about and bring visibility to their cultures, and the winners of these pageants work hard to help better their communities.

Many of these winners see the cultural pageants as great tools for promoting diversity on campus and in the Stillwater community, something many consider vital in a time when racial unrest has been at the forefront of people’s minds. Keona Marie Tidwell, Miss Black OSU 2020, said bringing cultural awareness is something OSU always needs.

Tidwell has worked with and supports OK State Stand United, an advocacy group on campus that brought forward a “List of Urgencies” intended to promote diversity and inclusion at OSU. Tidwell said she thinks there needs to be more representation on campus, resources available to minority students and more diversity among the university faculty. She wants every student to feel like they are represented on campus.

Cortez agrees, especially about student resources. Cortez said he has taken advantage of several OSU resources for first generation students, but he thinks there could be more.

“OSU does a good job of being proud of the people that come here, but I don’t think there’s enough diversity,” Cortez said. “I don’t think it’s particularly their fault. It has a lot to do with cost and opportunity and things like that. But if their initiative is to bring a lot of diversity in, maybe they could do scholarships that are open to students from diverse backgrounds.”

Most of the cultural pageant winners agree that bringing in more diverse students is needed, but Keji Moua thinks it’s also important for the pageant winners to bring visibility to the students already at OSU.

Moua, Mr. Asian OSU 2019, is Hmong. The Hmong are a nomadic people originally from China, but they have clans around the world. Moua grew up in California and came to Oklahoma with his family when his parents bought a farm. Growing up in the United States, his Hmong culture was always important to him. Knowing and practicing Hmong traditions helps him relate to his family, and he still practices these traditions while at school.

Moua said in his opinion, most religions have different wording for their teachings but seem to have the same goal, but he still thinks it’s important that people respect the differences in other people’s cultures and teachings. He looked back at an incident in high school when he had to terminate a friendship because the other person kept trying to push his religion on Moua.

Bringing more visibility to different groups of people is helpful in more than one way. First, it lets other members of that group know that they are not alone and helps them find a sense of community. Second, it lets people from other groups know that they’re not the only people so incidents like what happened to Moua in high school don’t continue to happen. That’s why Moua said one of the biggest responsibilities of the cultural pageant winners is to offer that visibility.

“The main important thing is to be the voice of the people,” Moua said. “Put yourself in their shoes and become the leader of that group. For me, I was with the group here in Stillwater. I was a leader in the Asian American community here in Stillwater. It’s a way for people to have a voice.”

Moua, Tidwell, Cortez and Gaona all believe in the importance of diversity, and they are working hard in their roles as cultural pageant winners to help increase diversity at OSU. They all believe the cultural pageants help with that, but they are not enough. In the meantime, they will keep working to be leaders for their communities at OSU.

“I’m proud of who I am,” Gaona said. “And I’m really happy that I get to be a representative for my culture here on campus so that we can reinforce our presence here and try to get more diversity for the campus.”