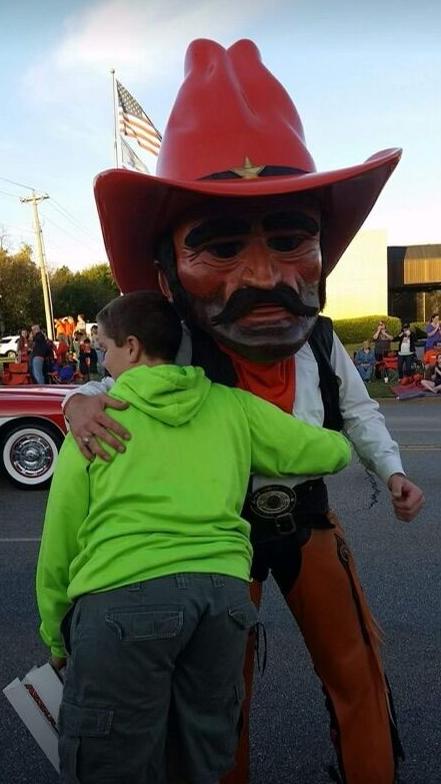 Alleyn Campbell was taken to the hospital by Taylor Collins, Pistol Pete, after the Homecoming parade crash - Campbell is now a member of Oklahoma State's marching band. 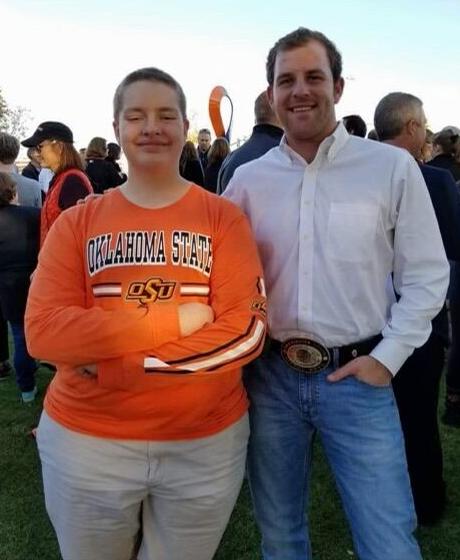 Taylor Colllins and Alleyn Campbell's family has remained in contact since the Homecoming parade crash. 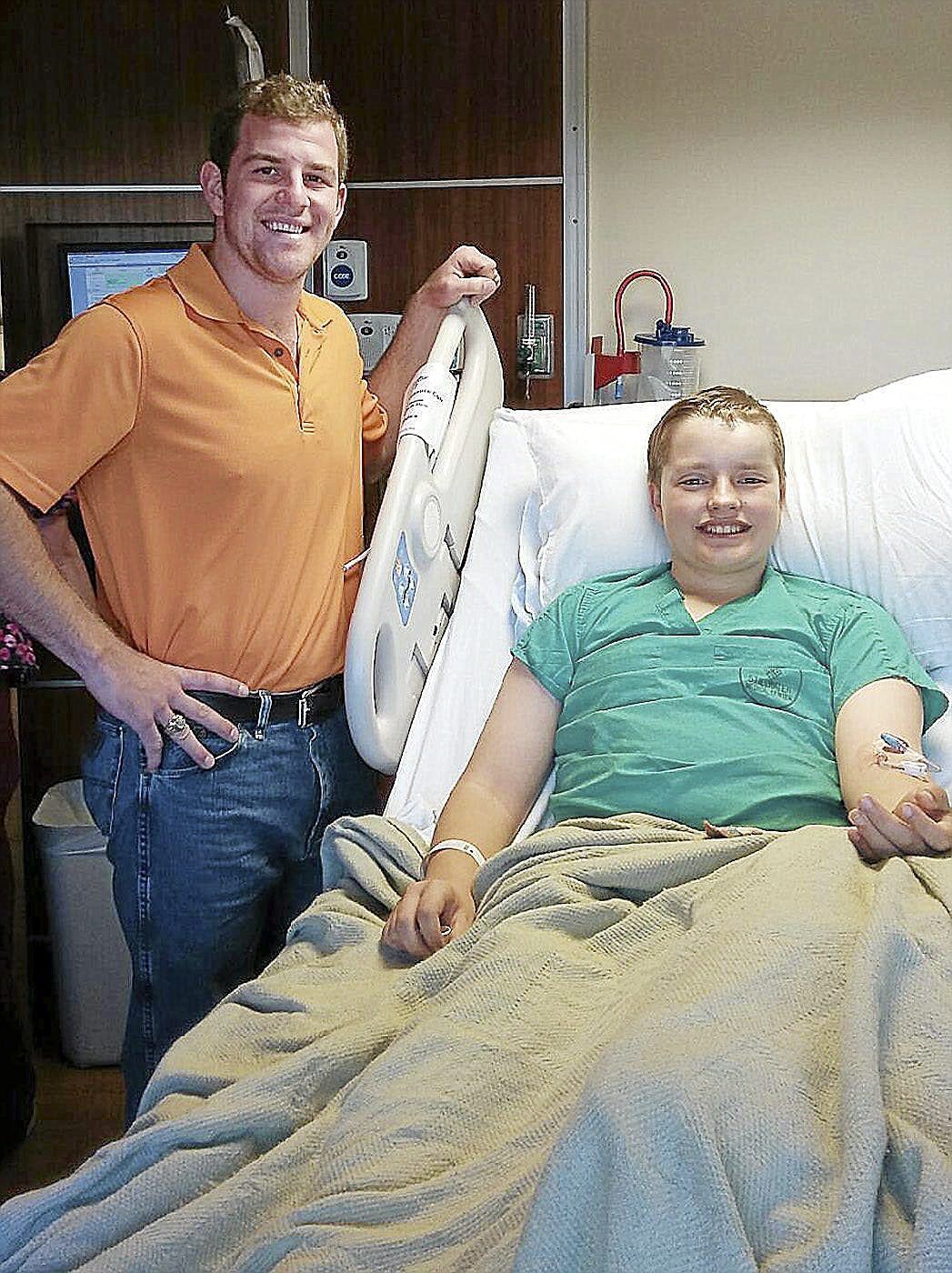 Taylor Collins made it to visit Alleyn Campbell in the hospital after the Homecoming crash.

Alleyn Campbell was taken to the hospital by Taylor Collins, Pistol Pete, after the Homecoming parade crash - Campbell is now a member of Oklahoma State's marching band.

Taylor Colllins and Alleyn Campbell's family has remained in contact since the Homecoming parade crash.

Taylor Collins made it to visit Alleyn Campbell in the hospital after the Homecoming crash.

Collett Campbell faced a moment of panic sitting in the backseat of a stranger’s truck.

She thought she had just trusted her son’s life to a lunatic.

The person driving Campbell, and her son, Alleyn, who sat in the truck bed behind her on a blanket that did little to lessen the pain of a dislocated hip and fractured leg, said he had taken off his head and left it with a group of cheerleaders.

Things made more sense after a seven-minute ride to Stillwater Medical Center, when Campbell saw a Pistol Pete sticker on the truck window. The college-aged “lunatic” who had just driven her son to the hospital was Taylor Collins, better known as Pistol Pete, the famed mascot of Oklahoma State University.

Collins was perfectly sane, in fact. To make room for Alleyn, Collins took his fiberglass Pistol Pete head out of his truck.

Alleyn was one of 46 people injured when a car plowed into the crowd at the 2015 Oklahoma State University homecoming parade. He was 12 at the time and required surgery on his leg as recently as March 2020. Campbell just began his freshman year at Oklahoma State, plays the tuba in the marching band and still thinks about the crash, but thinks about it positively because of his friendship developed with Collins.

Brief pleasantries were exchanged in the moment Collins offered his truck as transportation for spectators injured in the crash, but the Campbells did not formally meet Collins until he visited the hospital the night of the crash after serving as Pistol Pete in the football game against Kansas.

When Campbell told her son Collins was going to visit him, Alleyn didn’t know who she was talking about.

“My mom's like, ‘This person who transported you in their truck.’ I was like, ‘Oh, yeah, I probably should meet him,’” Alleyn said.

Collins said he remembers walking into the hospital room and thinking Alleyn was more beat up than he initially thought.

It wasn’t too emotional of a meeting. After all, what can one say after such an out of body experience.

“I introduced myself and figured I’d just get to know him a little bit, so we talked,” Collins said. “It was funny, (Alleyn) was like, ‘Thanks, by the way.’ I said, 'You’re welcome bud, no problem.'”

As Campbell filled Collins in on the extent of her son’s injuries, Collins and Alleyn talked for about an hour. Alleyn said he thought it was cool he was taken to the hospital by Pistol Pete, and that it was the first time he met a Pistol Pete without a fiberglass head on.

Campbell said he got a lot of cool visitors during his time in the hospital. His middle school classmates, some of whom he had never met before, former OSU President Burns Hargis and First Cowgirl Ann Hargis. Even former OSU quarterback Mason Rudolph.

One of the visitors that kept checking in and turning up as life moved on was Collins.

The Campbells are big parts of the Stillwater community and enjoy supporting OSU athletics. Collins worked as Pistol Pete a year and a half after the crash and would make a point to seek out Alleyn at those sporting events.

In the hospital, Collins told Alleyn he could always identify which Pistol Pete he was by the distinctive orange bandanna hanging out of his back pocket.

“Whenever I attended an event like basketball, football, I was really into watching those, sometimes baseball. I would definitely always look for the bandana in his pocket,” Alleyn said. “I was like, ok, he's here, and then I was always going up to him, like to talk to him.”

The two saw each other a lot in the year or so after the crash, although the conversations were always one-sided. Collins never broke Pistol Pete’s silent character, not even for his friend Alleyn.

“It was a little bit frustrating,” Alleyn said, “because I was like, ‘I know you have a voice. I know you can talk. Just like go around the corner, take off the head and be like, ‘Hey, what's up?’ And then put it back on or something.’”

When Collins wasn’t Pete, the two would talk about most anything but the crash. How baseball and band were going and Alleyn’s latest bowling high score. Just regular guy stuff.

Later in the 2015 football season, ESPN’s College Gameday came to Stillwater for Bedlam. Campbell said Collins and his friends got together and made sure Alleyn, who was confined to a wheelchair, had a prime spot near the fence. It was certainly a kind gesture, but nothing a friend wouldn’t do for another friend.

“An older guy when I was a kid that would take the time to talk to me was always neat,” Collins said. “So I figured he would enjoy it, but I was enjoying it just as much. (Alleyn) was a good buddy of mine really, he's a cool kid,” Collins said.

Collins graduated from OSU in 2016 and moved to Dallas for work. Although doctors had told Campbell participating in band was out of the picture due to his injuries, Campbell continued his recovery and continued playing the tuba, timing up his surgeries to avoid the Stillwater High School band season.

The two stayed connected to each other, even with a couple hundred miles between them. Collette updates Collins on her son’s latest endeavors, like when he was accepted into OSU and joined the marching band. Facebook also keeps the two in touch.

The last time Collins and Alleyn were in person together was for a ceremony in October 2018 dedicating the Stillwater Strong Memorial at the site of the crash.

That day, Collins enjoyed saying Alleyn was no longer (only tall enough to reach) his waist.

“I was like, ‘Oh, thanks for reminding me,’” Alleyn said.

But the height difference between the two wasn’t the only thing that had closed in the years after the crash. Alleyn was no longer just the kid looking up to a college student kind enough to get involved in his life.

“It was super cool to be more or less his age and like getting to meet up on how he's doing in his life and what his new adventures was,” Alleyn said.

The style of friendship has evolved as Campbell and Alleyn have grown, but remained strong because of the way they were brought together.

“It's certainly a relationship that will always probably be there because of how we met and everything,” Collins said.

The “everything” meaning a seven-minute car ride in a “lunatic” stranger’s truck.