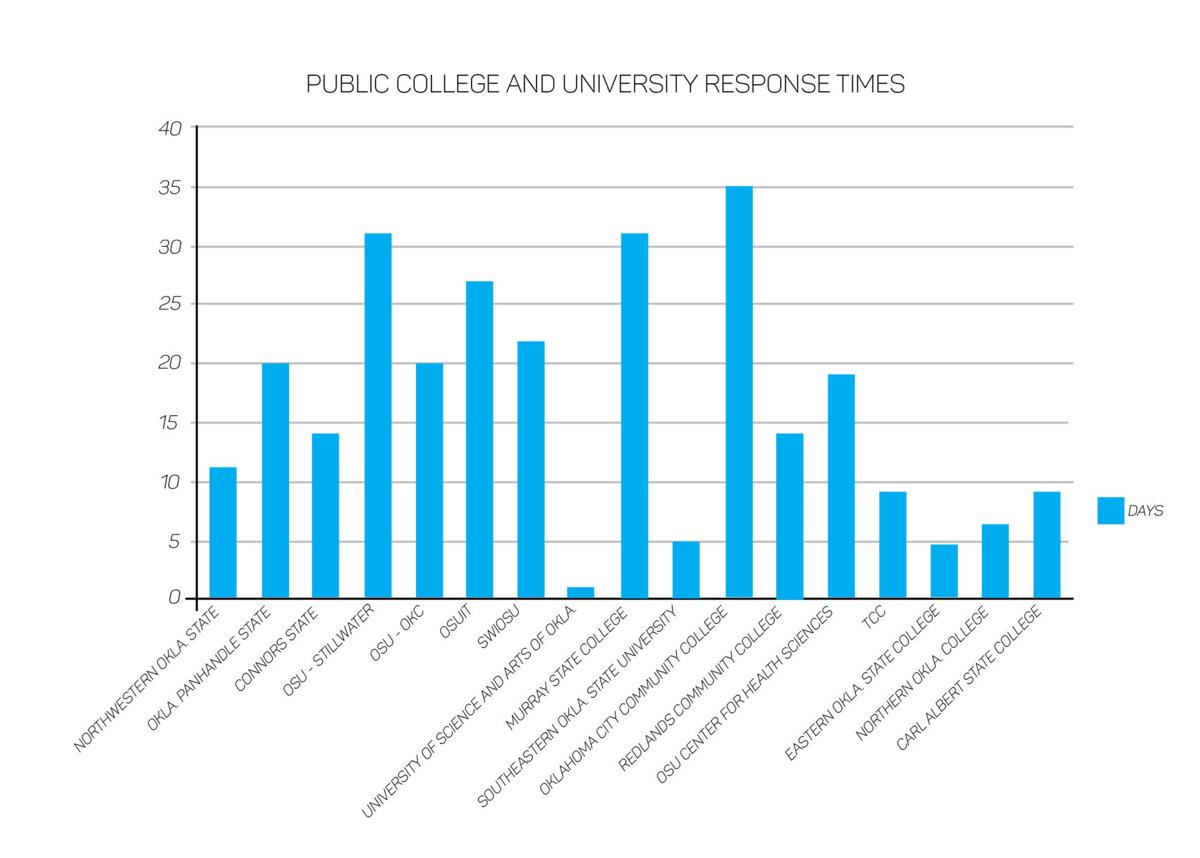 A look at the number of days it took college and university around Oklahoma to responds to the O'Colly's open records requests. 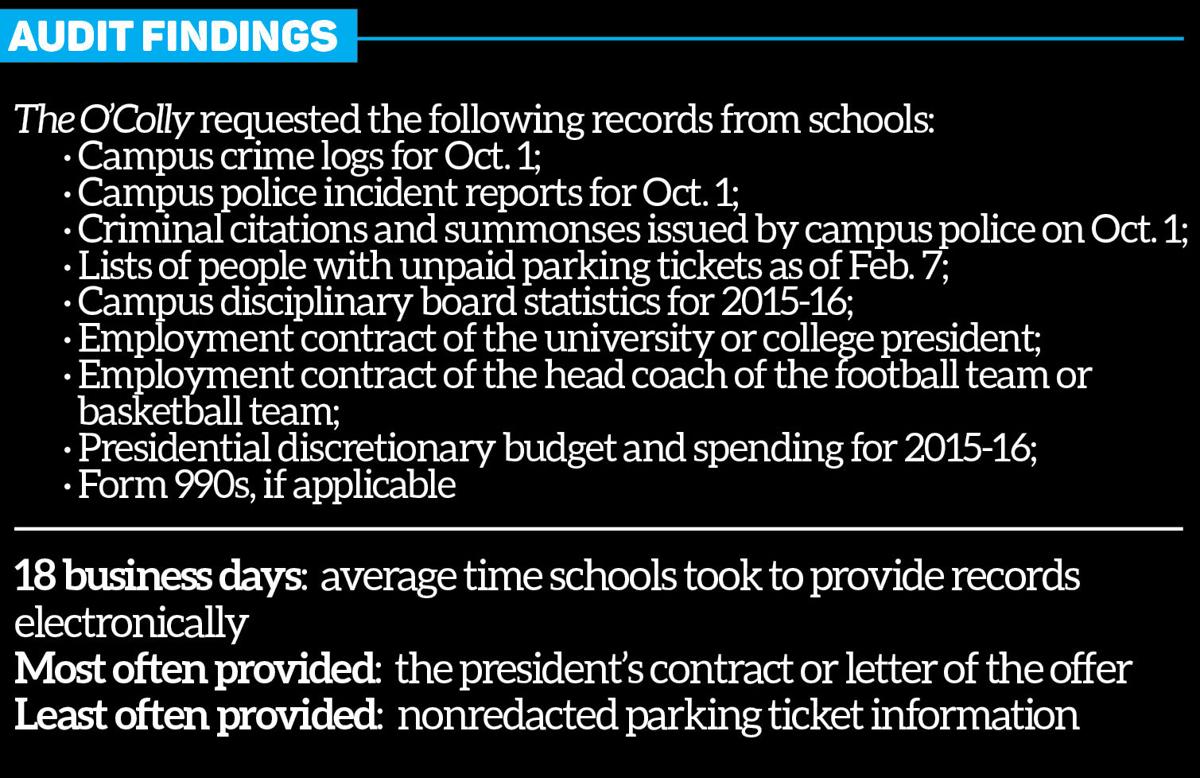 Not all state public colleges and universities are following the Oklahoma Open Records Act, according to experts.

In an early February open records audit the O’Colly conducted, about 60 percent of the state’s 31 public colleges and universities offered documents for inspection. The requested documents included items such as unpaid parking tickets, campus disciplinary board statistics, and contracts for school presidents and coaches. In some cases, schools refused to release documents previously considered to be public while other schools have yet to respond.

Two schools said the requested records could be inspected. Five colleges and 11 universities responded by sending the records electronically. One college sent records by mail.

Eight schools acknowledged receiving the request but hadn’t made records available as of Friday. Four schools did not respond to the requests.

The Oklahoma Open Records Act states “all records of public bodies and public officials shall be open to any person for inspection, copying, or mechanical reproduction during regular business hours.” Public colleges and universities are considered public bodies and are required to comply with the law.

Frank LoMonte, the Student Press Law Center’s executive director, said state-funded colleges and universities have a responsibility to be open with the public. Open records audits are one way to gauge schools’ level of transparency, LoMonte said.

“I think that when you periodically test people’s compliance,it serves a really valuable function both to remind the public that these laws exist and to remind the agencies that they have legal obligations,” LoMonte said.

‘A bunch of bullshit’

Some schools claimed they don’t keep parking ticket databases with student names while others claimed the records were protected under Family Educational Rights and Privacy Act.

Oklahoma State University refused to release the names of students, faculty and staff who haven’t paid their parking tickets. It also withheld the names of people unaffiliated with OSU who have more than one unpaid campus parking ticket.

Shutt said the students' names also are protected under FERPA because their bursar accounts are educational records.

However, LoMonte of SPLC, a nonprofit organization that advocates for open government on campuses across the country, said even if the record appears in the student’s educational file, the school still has to produce the record if it is stored elsewhere.

For example, a police report would be kept at the campus police department but might also show up in a student’s disciplinary file.

The University of Oklahoma said fulfilling the request for parking tickets would cause “an excessive disruption to the essential functions of the office.” The records custodian noted their “several thousand pages” of unpaid parking tickets and asked the O’Colly to narrow its search.

In November 2014, OU President David Boren ordered parking citations to be released, negating the university’s prior claim that parking tickets were considered student education records protected under FERPA. Following OU’s lead, OSU changed its policy and decided to make the records available to the public.

"In keeping with the Oklahoma Open Records Act, Oklahoma State University has withheld the names of students receiving parking tickets to protect their privacy,” Shutt said in an email to the O’Colly after OSU President Burns Hargis changed the policy. “However, going forward, the university has decided to make student names available through the open records process.”

OU’s decision to make parking tickets public was motivated by a lawsuit filed in 2013. After the university administration repeatedly refused to release copies of parking citations issued to students, a student reporter at the OU Daily sued the school. OU Daily editors joined the lawsuit, and OU President David Boren decided to change the university’s policy.

Joey Stipek, the former OU student who sued for the parking ticket records, said issues at another university piqued his interest in the records at OU.

In 2011, a North Carolina judge ruled that parking tickets are not considered education records after the University of North Carolina refused to release the records, citing FERPA.

“FERPA does not provide a student with an invisible cloak so that the student can remain hidden from public view while enrolled at UNC,” the judge wrote.

Local media requested the documents after suspicions that the university was waiving athletes’ parking tickets.

Stipek pursued the records to investigate whether the same practice existed at OU. He said students in particular should be interested in transparency at the collegiate level.

“It’s how your money is being spent,” Stipek said. “Public access to me is an important right.”

Nick Harrison, the attorney who represented Stipek and specializes in open records law, said parking tickets are public record whether they are paid or unpaid.

“Essentially what the (OSU) open records office told you is completely contrary to what OSU’s president said the day after OU’s president,” Harrison said, referring to the policy change in 2014.

Harrison also said OU’s lack of response to the request after more than two months violates the “prompt, reasonable access” clause of the state Open Records Act. OU’s excuse that providing the parking ticket data would cause “an excessive disruption” is ridiculous, he said.

“Honestly, I think that’s a bunch of bullshit,” he said. “They process requests like this all the time from major news media outlets. You’re asking for very specific records, what you want, and none of that stuff is particularly a time-intensive thing for them to do.”

Harrison wrote for the OU Daily while attending the OU College of Law and working toward his master’s degree in entrepreneurship. He said the school should be prepared to provide the requested documents on a regular basis.

The University of Oklahoma did not immediately respond for comment.

Harrison also referenced a 2005 Oklahoma attorney general opinion in which former attorney general Drew Edmondson said public records should be available in the office “where the records are located in the ordinary course of business.”

For example, record requestors seeking a police report should be able to bypass the campus communications office and contact the campus police department directly, eliminating what Harrison referred to as “bureaucracy.”

Through correspondence with OSU officials, it became apparent the O’Colly’s records requests regarding the audit and filed at OSU A&M schools, such as OSU-Tulsa and OSU Center for Health Sciences, were being filtered through OSU’s general counsel’s office in Stillwater.

Open records experts frowned upon the practice of channeling records requests through a legal office, a habit that is becoming more prevalent on college campuses, LoMonte said.

The process is not only inefficient but also potentially causes taxpayer dollars to be spent on unnecessary review, he said.

“Because everything now is being funneled through a single gatekeeper that causes delay, and it also means people end up paying oftentimes for excessive legal review that’s not necessary,” he said.

In March 2006, Edmondson, the former attorney general, told The Oklahoman OSU’s policy of sending all requests through a legal office could be in violation of state law by not providing “prompt and reasonable” access.

OSU’s policy concerning open records, which was revised July 2006, states “some” requests may be sent to the school’s Office of Legal Counsel “for advice on accessibility.”

Shutt said if his office is slow to respond to a request, it is usually because of the size of the request.

“The law says we must respond in a reasonable amount of time, and that is our goal,” Shutt said.

Shutt said the communications office serves as a central point for records requests and OSU’s Office of Legal Counsel serves as a check in the system to ensure the documents released are public.

“Our duty is to make sure anything we turn over is legally something we can turn over,” Shutt said.

In most cases, records requests go through the university’s legal office unless the requestor is asking for a known public document, he said.

Burton said the school averages about four open records requests per year. The university responded to the O’Colly’s request in five days, compared with the 31 days it took OSU.

“We believe it is very important and do our very best to fulfill each request in a timely manner,” Burton said.

A study released in March revealed access to public records has grown worse at state and local levels in the past four years, according to about half of the 228 journalists, scholars, records custodians and others surveyed.

The study, which University of Arizona journalism professor Dave Cuillier performed, also found 38 percent of those surveyed said they noticed an increase in record denials at all levels of government during the past four years.

In Oklahoma, top government officials have prompted court battles in an effort to keep public documents secret in recent years.

The American Civil Liberties Union filed a lawsuit against Gov. Mary Fallin in November 2015, alleging her office was not complying with the Oklahoma Open Records Act after two organizations hadn’t received requested documents for more than a year. The suit is ongoing, and a pretrial conference is scheduled for July 26.

In February, an Oklahoma County judge ruled then-Oklahoma Attorney General Scott Pruitt had violated the state open records act for withholding public records. The court ordered Pruitt’s office to turn over more than 2,500 emails it kept from the public for more than two years.

LoMonte said he believes many agencies in Oklahoma and around the country view compliance with open records laws as optional.

“Nobody would treat any other law the way people treat open records laws,” he said. “You certainly wouldn’t treat the IRS tax deadline like it was a suggestion.”

Paul Monies, president of FOI Oklahoma Inc., an organization specializing in Freedom of Information,said it doesn’t help the case for open government when top officials such as the governor and state attorney general are fighting to keep documents from the public.

Monies said other state agencies are watching how the highest state offices handle these requests and might even take their cues from them. Monies said government transparency becomes an issue, too,when top officials promote policies such as first-come, first-served, which can cause delays.

The policy is not an effective way to fulfill requests because it can deter people from asking for records because the system is backed up, causing lengthy delays, Monies said.

“If you’re making policies where you’re basically delaying and pushing (back) returning requests and information, unfortunately that’s not a very good way to show that your government is transparent,” he said.

One possible solution for better access to public records, Monies said, could be including statutory deadlines in the Oklahoma Open Records Act, forcing agencies to respond within a given amount of time.

Another option would be to employ an ombudsman to ensure open records requests are being fulfilled, he said. But questions linger about which state office would absorb the position and whether the state could afford to pay another salary.

Regardless of the solution, strides need to be made on behalf of open government in Oklahoma, Monies said.

To view records provided by Oklahoma’s schools, click here or go to http://bit.ly/2oiWnKN