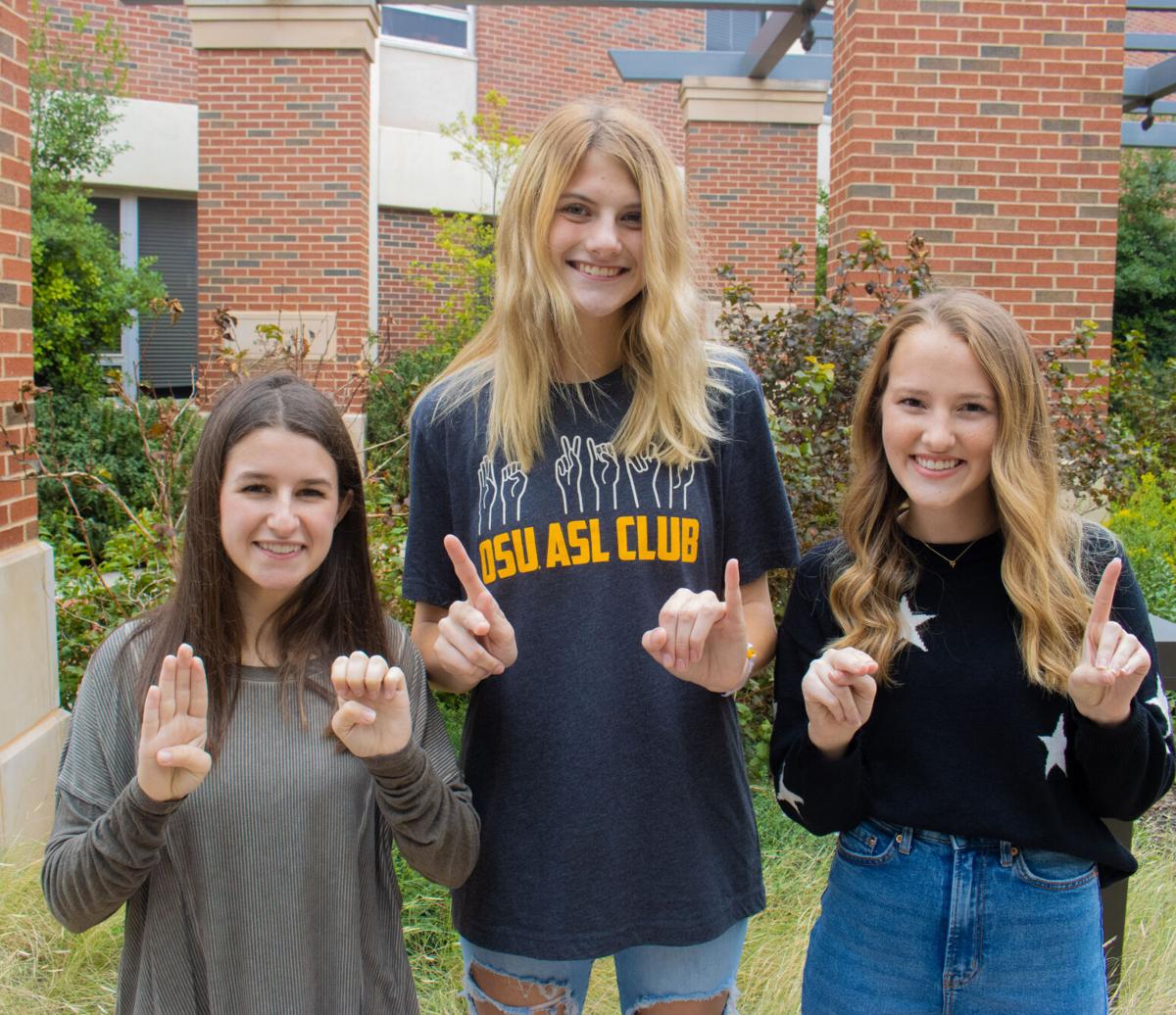 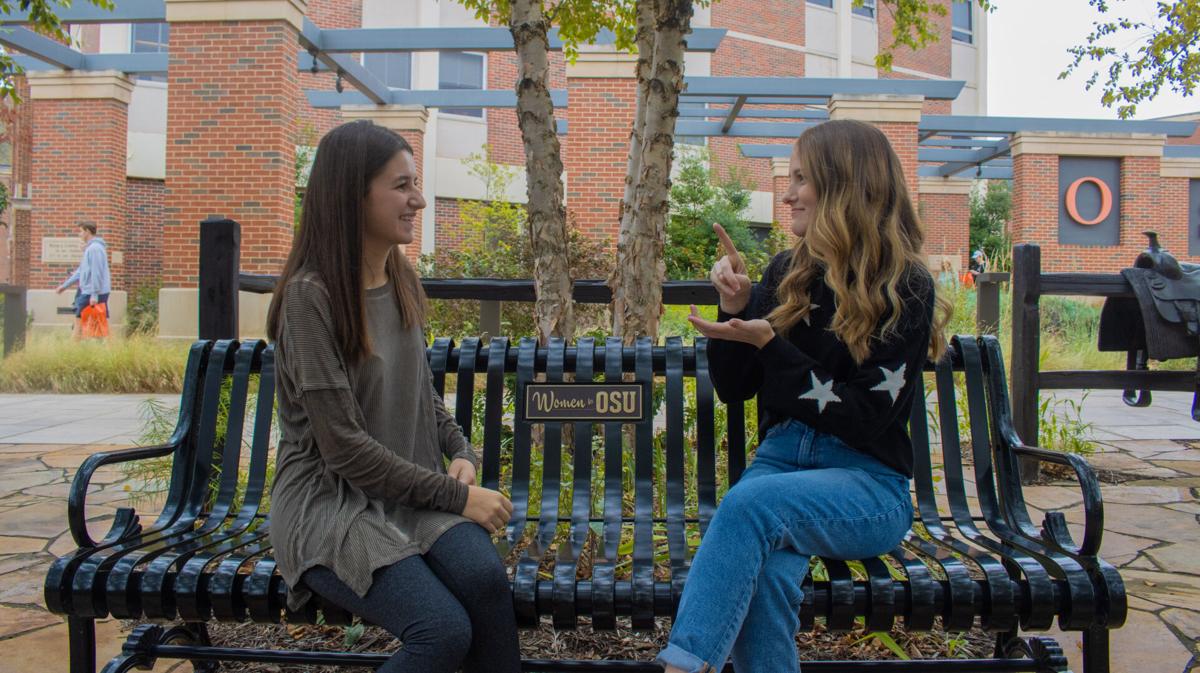 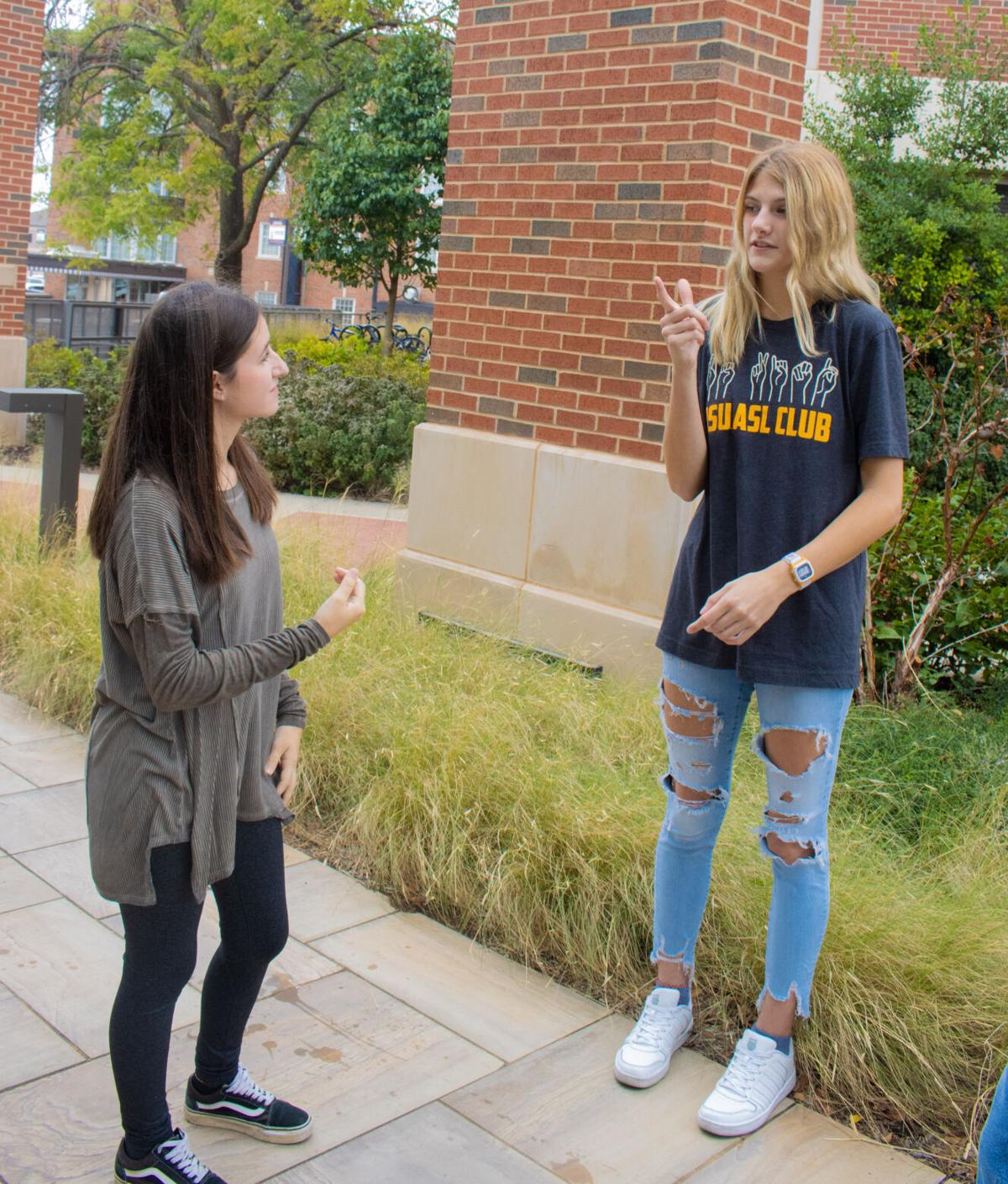 Bethany and Rose are part of the ASL Club where members talk mostly in sign language.

Bethany and Rose are part of the ASL Club where members talk mostly in sign language.

Adrian Chebultz grew up attending a deaf school until his freshman year of high school.

He then made the decision to transfer to a public school. During the first four months at the new school, he did not have access to an interpreter. As a deaf student in a hearing environment, this made learning almost impossible for him.

“It was one of my hardest struggles, it’s frustrating and my grades were hurting because of it and then I got a full time interpreter and it made a complete difference,” Chebultz said. “I had a support system and she knew what I needed and she delivered. Every extracurricular activities and club meetings, she was there.

“I took couple of concurrent classes also, she was there every night. If it wasn’t for her then I wouldn’t be able to get the education I needed to get me where I am today. Then I’m thankful for people like Janice Woods and Taylor Woodall-Greene. They’re great interpreters and not only that but they’re also my supporters.”

Chebultz is a sophomore at Oklahoma State studying elementary education. Chebultz said students at OSU are hoping to positively impact people in the deaf community similarly to how his interpreter was able to help and advocate for him.

Because of OSU’s new bachelor’s degree in American Sign Language (ASL) studies, those hopeful students have the opportunity to dive into deaf culture and become fluent in ASL. Furthermore, if students pursuing the ASL studies degree want to become interpreters, they have the option to focus their career path specifically on that.

Taylor Woodall-Greene is an associate professor for the Languages and Literatures Department at OSU, and she played a key role in the curation of this new degree.

“Maybe somebody comes in, and it’s a deaf student who wants to be an educator and wants to teach other deaf children,” Woodall-Greene said. “They can major in American Sign Language studies, which we do have courses that are specifically for that. Or, maybe it’s a hearing student who comes in and wants to be a sign language interpreter, they can take courses that are more aligned with what a sign language interpreter would take.

OSU is the only university in Oklahoma to offer a bachelor’s degree in ASL studies including advanced courses in ASL interpreting that can train students to become interpreters, Woodall-Greene said. This will make an interpreting career path easier to get, which could help increase the supply of interpreters in Oklahoma.

Janice Woods is a lecturer of ASL at OSU as well as an interpreter, and she experienced how interpreters can make a positive impact on the deaf person they are assisting. Woods has seen how interpreting can be beneficial in several different areas of a deaf person’s life including, work, education, social, medical and legal.

Deaf people are often in hearing environments, and need access to the content surrounding them in those situations. Interpreters step in these situations and help people gain equal access where they see a language barrier, whether it is at a hospital, insurance agency, courthouse orschool.

Woods said, though, the demand for interpreters is higher than what is currently being supplied.

“We are truly at a shortage in terms of nationwide,” Woods said. “There’s more demand than there is supply at this point. I’ve been doing this a long time. I’ve been a private practice interpreter since 1995, and so there was a time when an interpreter needed to plan for a lull in the summer or over the holidays.

“So, budget-wise we would have to work extra in the busier times in order to cover the leaner times, you know, budget-wise, but just in the last - I would say - 10 years, there just haven’t been the lulls… In fact, I’m getting - daily, if not daily then I would say every 2 or 3 days - I’m getting requests for work, for me to do more interpreting either through emails or phone calls or text messages. There’s just constantly a demand, and it’s not being met by the supply.”

One future interpreter to help with the demand is Rose Foss. She is a sophomore studying communications, sciences and disorders as well as the new ASL studies major.

Passionate about learning ASL, Foss said she is a strong friend of, and advocate for, the Deaf community. Her hope is to become an audiologist as well as an interpreter. Foss said she was ecstatic when news broke about the new ASL major and hurriedly added the major to her college degree plan.

“Just being in that community - I loved it, and they were so accepting,” Foss said. “I think everyone should know ASL.”

If a student wants to have a focus on interpreting, becoming a teacher of deaf students or something similar, then they have the option to choose it. However, at the degree’s core, it’s goal is to help teach students ASL.

If someone at OSU is pursuing a career as a doctor, a lawyer, a teacher or one of several other career options, they can also major in ASL studies. Then, they will be fluent in another language, which can be beneficial in case they come across a deaf person within their line of work or even in their everyday lives.

Woodall-Greene said the ASL studies degree is more than just a career path or an acquired skill. She said this degree can open students’ eyes and have a real impact on their lives.

“It’s going to prepare you for interacting with differences and having tolerance and being accepting...I mean, it’s just a beautiful degree, and I’m really excited. I’m thankful for all the professors that we’ve been able to hire to come in and teach about this, and I’m really excited for what the future holds.”