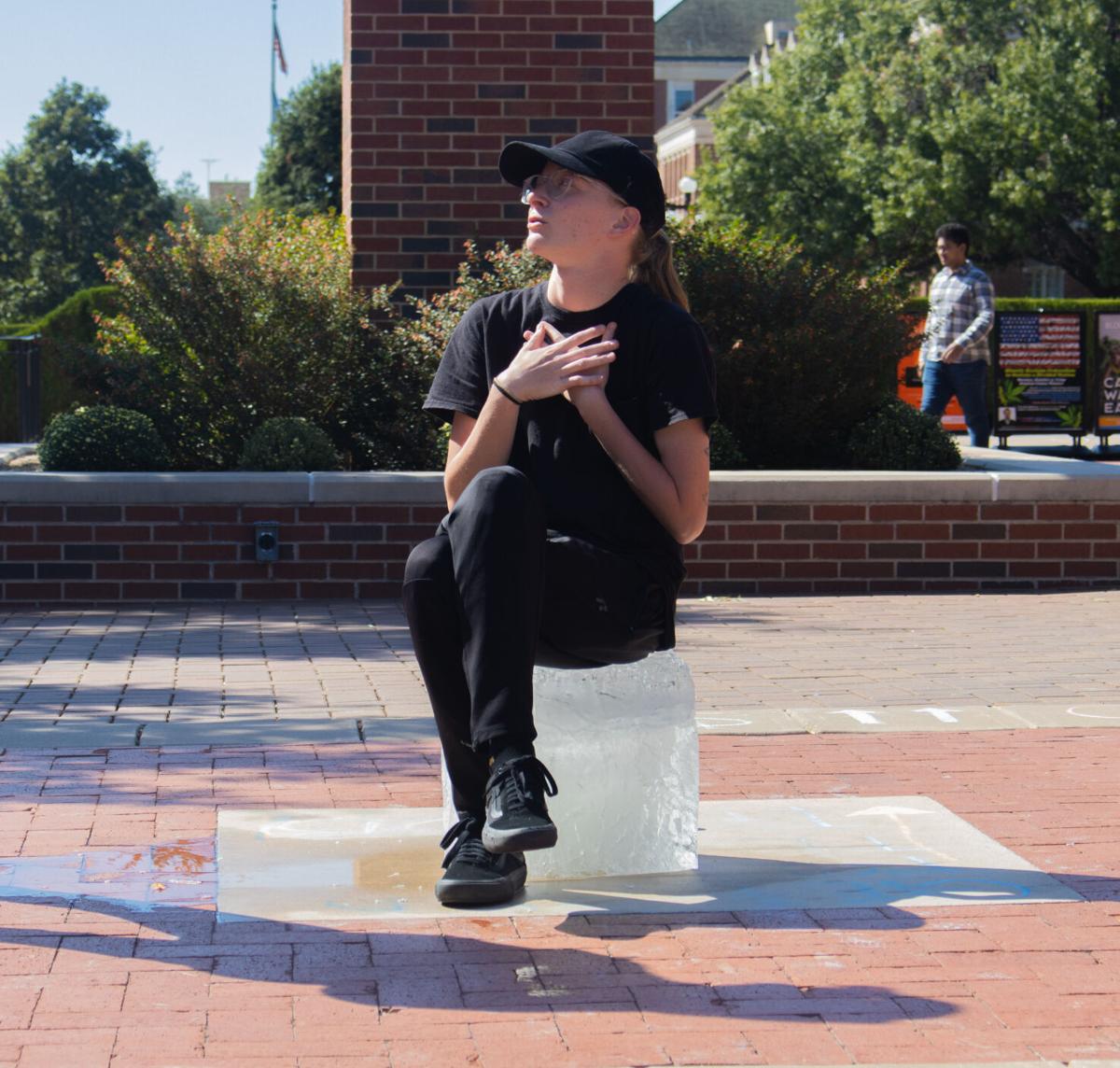 Erin Owen sat outside the Student Union for over six hours. 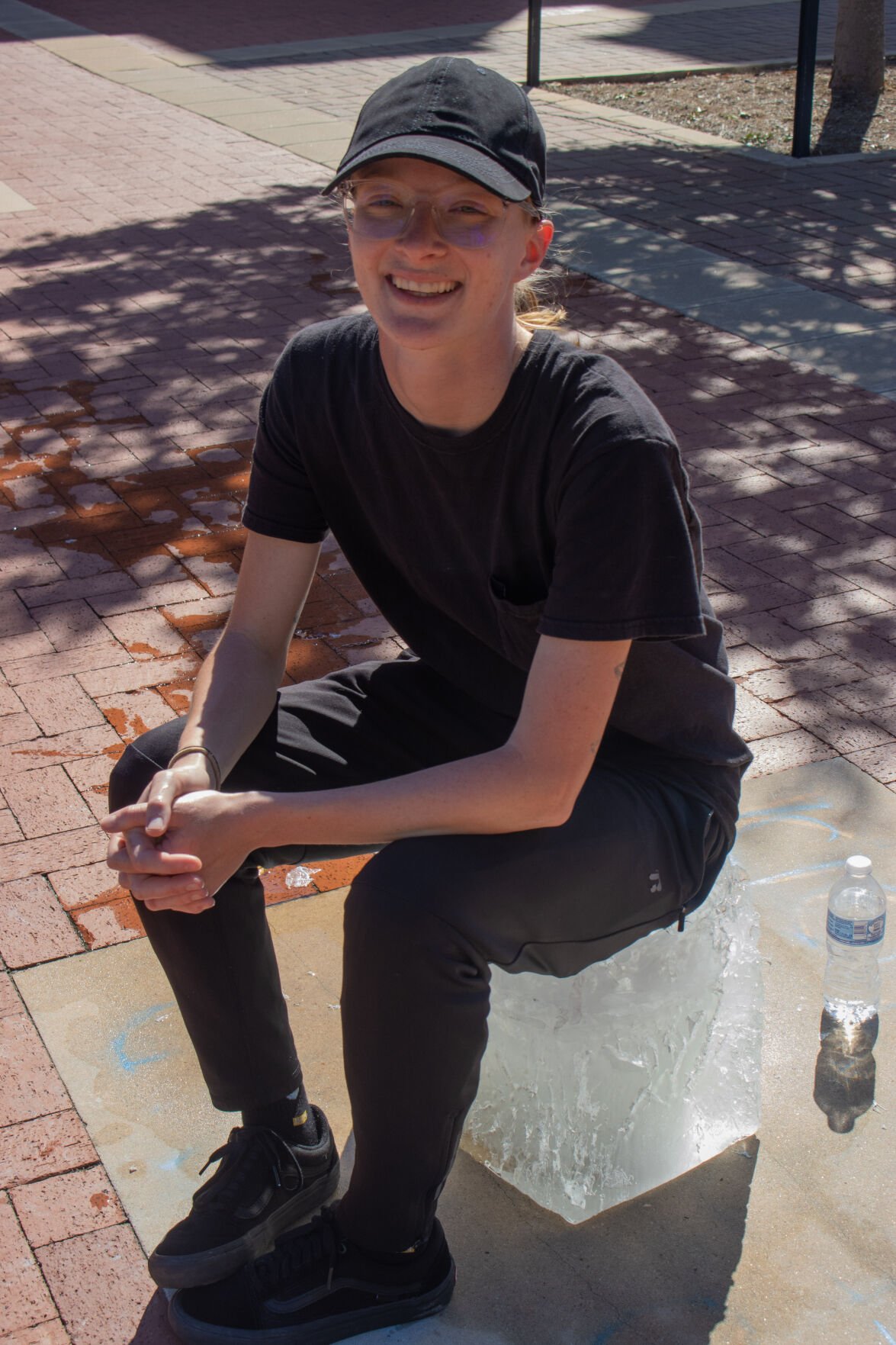 Erin Owen sat outside the Student Union for over six hours.

Rolling a large 2-by-2 feet block of ice out of the Student Union freezer in front of Chi- O Clock, Erin Owen, a fine arts senior, sat on the ice for a project merging art and awareness.

Q:Why are you sitting on a block of ice?

A:  I am an art major here at OSU and then I am also an environmentalist, so what project we’re working on right now is strictly performative. So for mine, the concept is as this ice block is melting, I’m just going to be completely ignorant as to what is going on. I am not concerned with this ice. I don’t care that I’m sitting on it - it’s whatever. And then, as it’s melting into a puddle and breaking a part, I’m going to start to panic and get people to sign a petition to save this ice block or try to sweep up this puddle to build an ice block. Just mirroring how humans will ignore the problems until it’s way too far gone. It doesn’t even have to be environmental on how people can take it (the project). Of course for this project it was about climate change for me, but it also is humans just completely ignore what they need to (pay attention to) until it’s way too gone.

Q: How long have you been out here?

Q: Isn’t that around six hours?

Q: Is this just a video project?

A: Yeah. So, I’m hoping I get a good time lapse of it completely melting and then also at the end, me freaking out and causing a panic.

Q: What inspired you to get into art?

A: I feel like I have always been in it. I feel like environmental art is where it zones in for me. I am from the country, I’ve lived in the sticks all of my life. So, like ‘leave no trace’ and stuff like that has been very clear to me and then, at the same time, I wanted to go into environmental science. So, it’s me trying to find a happy medium between the two. A lot of the projects I work on are strictly scientific and go off of stats.

Q: When did you start getting involved in environmental stuff?

A: I took this course, I want to say, my sophomore year here. It was just environmental concepts and he (the professor) put me on a lot of concepts and I was just like ‘wow, I didn’t know I could think creatively about science and put the two together.’ It just kind of took off from there, really.

Q: How many people have come by to ask you why you are on a block of ice?

Q: Is that why you are doing it out in public? To bring attention to your project?

A: Yeah. I did want to see what people’s reactions were. I know Oklahoma is really tough to talk about these types of concepts, so I just wanted to see what the student body was like. For the most part, I’ve gotten a lot of side eyes and people being like ‘what the heck?’ But when people have come up and talked to me, I have had really great conversations with what their opinions are about climate change or why do they oppose it, or stuff like that. But yeah, it was kind of just to see what people would think of like, an off-putting situation.

Q: Are you cold right now?