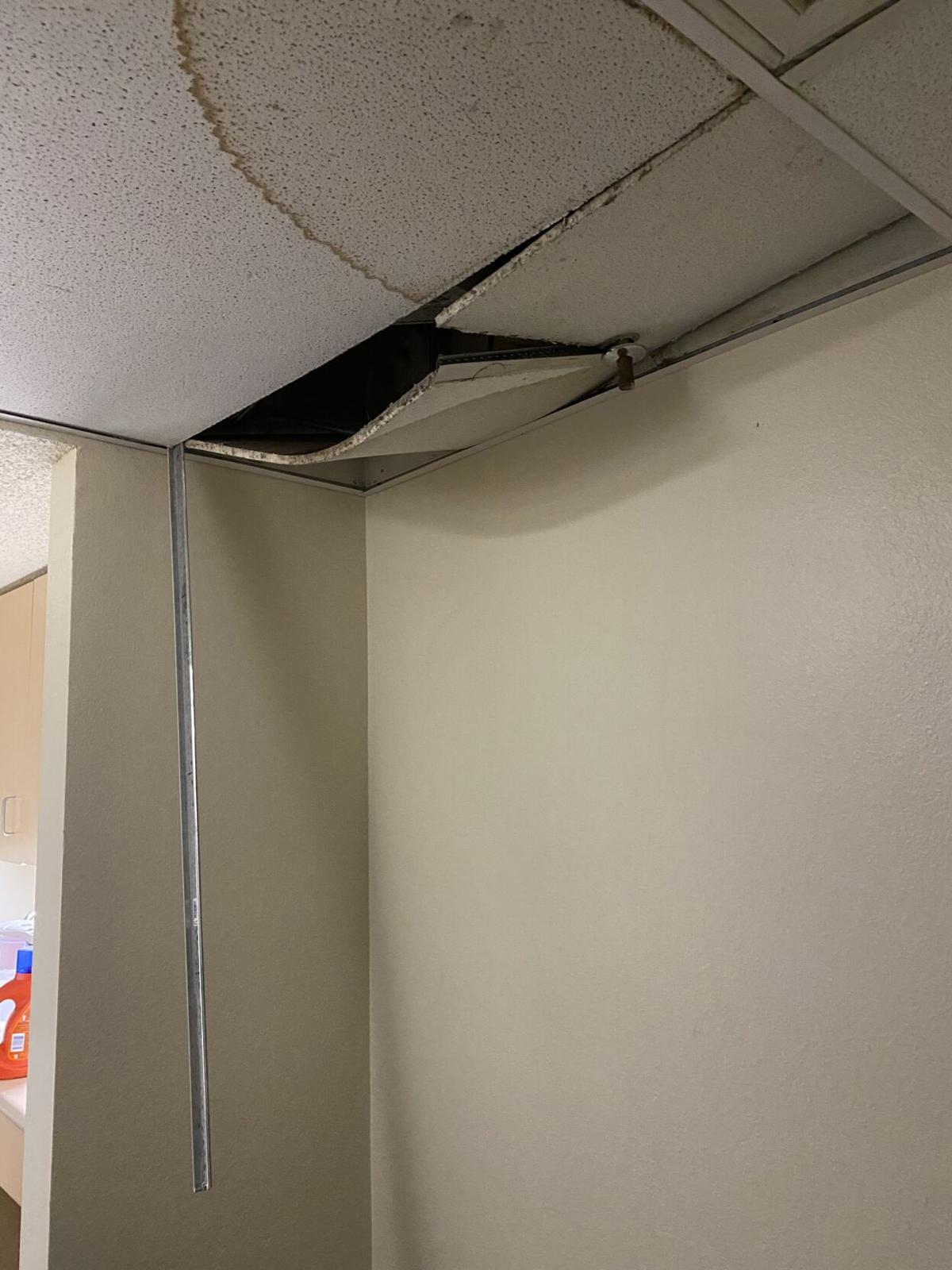 Due to water damage, ceiling tiles in Patchin-Jones Hall began to sag. 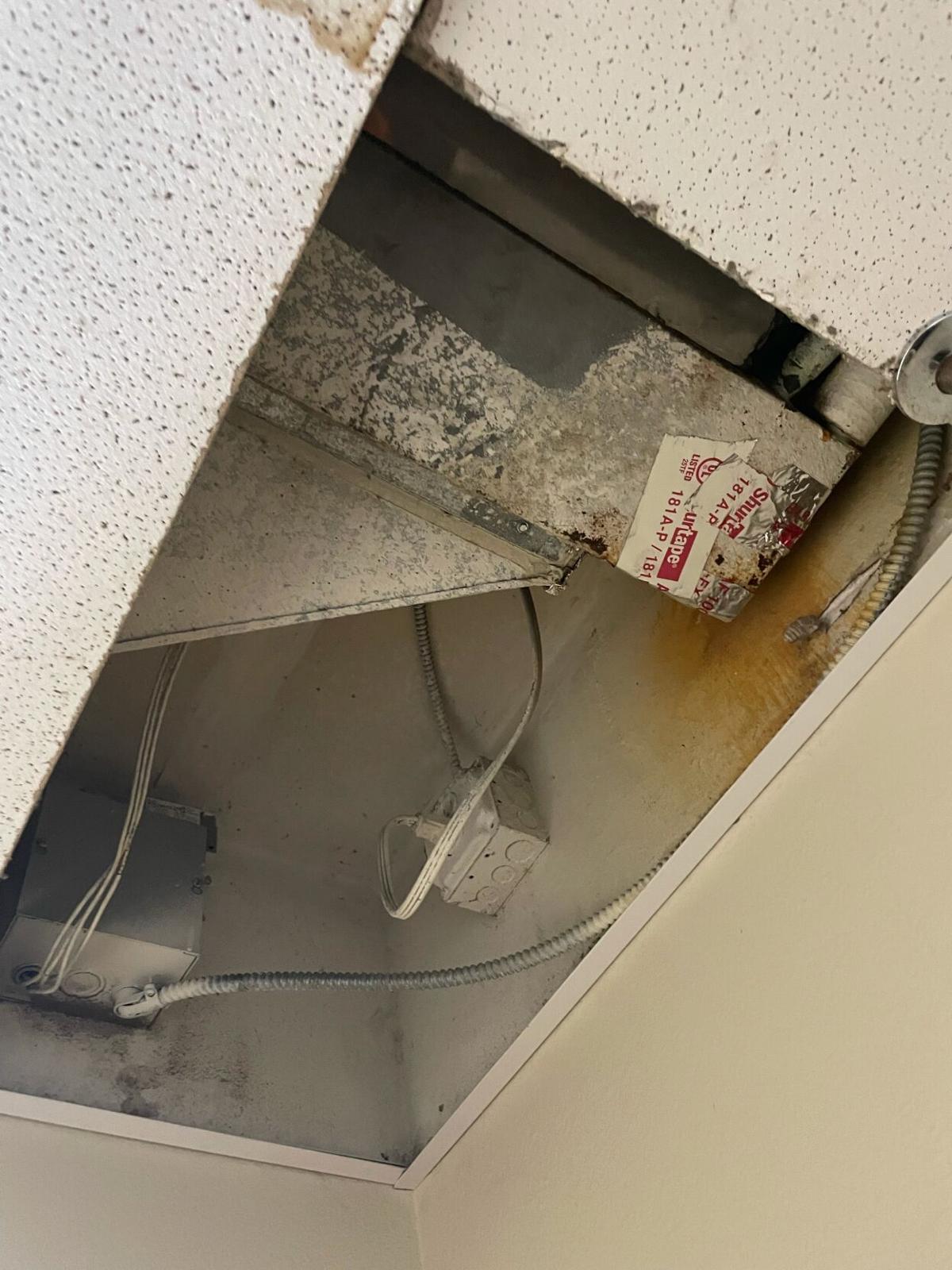 At first, Ryan Crimmins said she thought it was a small issue. 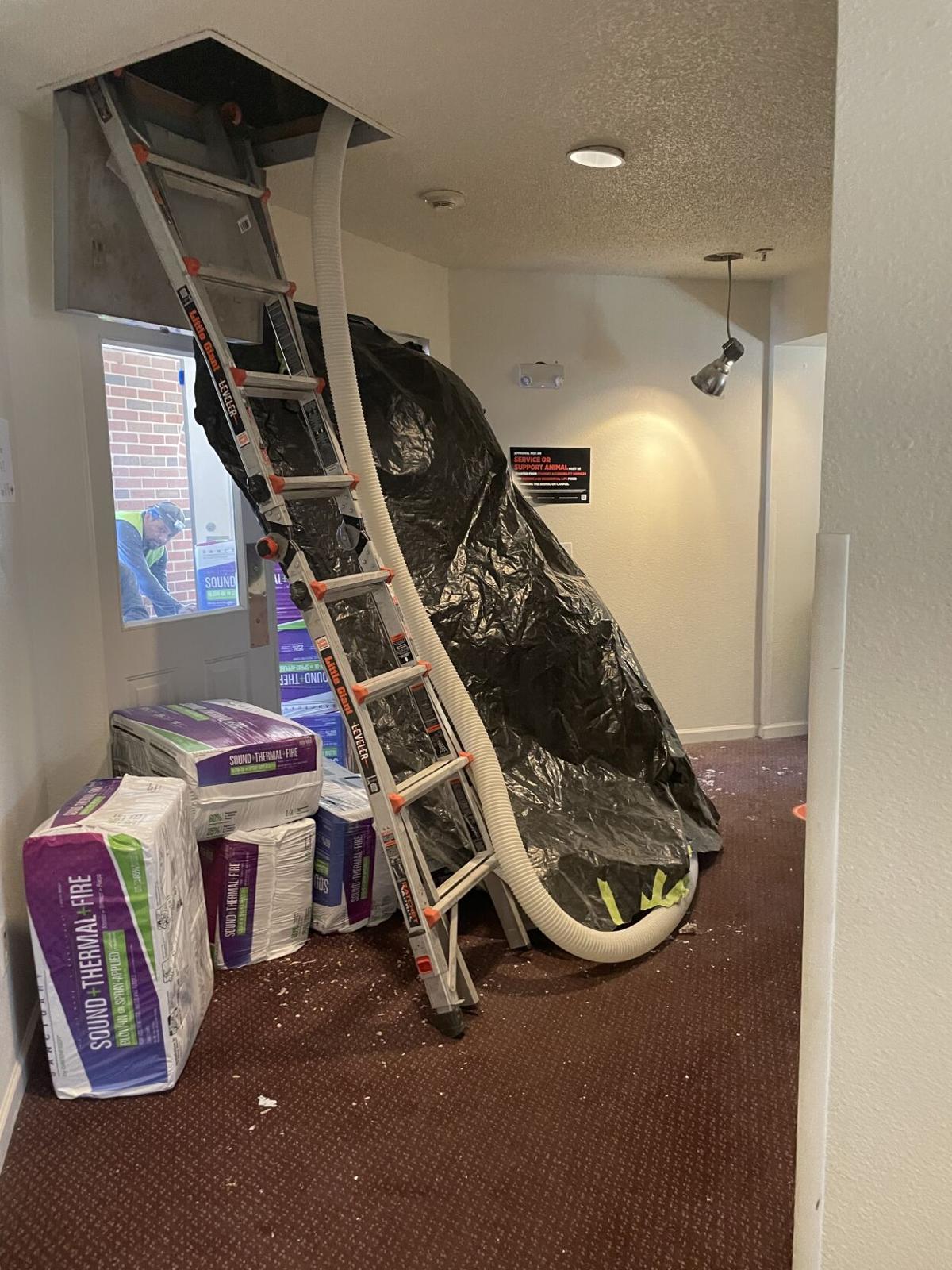 Workers continue to make repairs and fix the problem in Patchin-Jones.

Due to water damage, ceiling tiles in Patchin-Jones Hall began to sag.

At first, Ryan Crimmins said she thought it was a small issue.

Workers continue to make repairs and fix the problem in Patchin-Jones.

Four freshmen had a section of ceiling in their entryway collapse, toward the beginning of the fall semester in Patchin-Jones Hall.

The ceiling fell in after a week of staying in their new dorm, an unexpected inconvenience for the girls.

Ryan Crimmins, a freshman business entrepreneurship major, said while moving in she saw residue on the ceiling tiles. Crimmins said she thought it was a small issue but the problems grew and leaks began occurring.

In hopes of stopping the leaks, Sarah Siler, one of the roommates and a freshman psychology major, decided to contact her community mentor (CM). Another roommate, Aubri Diaz, an elementary education freshman, called Housing and Residential Life.

When maintenance came, the girls said they misunderstood the issue. Instead of looking at the ceiling, they tried looking around in Diaz’s room for the problem. When the girls explained the situation was with the ceiling, maintenance said they cannot help solve this issue and gave them a phone number to contact.

After four days, someone came to try and fix the leak issues, but was unable to finish the job. Siler said later maintenance workers replaced parts to prevent more leaks and told the girls the issue was solved. But despite these efforts, the leaks got worse and the ceiling in their entryway collapsed along with one of its supporting beams.

Siler said she went to her CM to get help and they contacted residential life. However. they were told the issue was not an emergency because there was no dripping occurring.

"Well our ceiling clearly is leaking because it's falling through because of how wet the tiles are," Siler said "And there is water running down the walls on to the floor... that's literally what a leak is."

After a week, residential life relocated the girls to an apartment complex so maintenance would fix the leaking issue as well as the collapsed ceiling.

“We work with Facilities Management to determine the next steps, timeline, communicate, and coordinate with the residents, and offer relocation if needed,” Shannon Baughman, Associate Director of Operations for the Department of Housing and Residential Life, said.

When they returned to their apartment, the girls discovered their ceiling was not completely fixed. Crimmins said hanging bits of the ceiling where removed, masking tape was put in a few spots and left the water stains from the leaks.

It was not until a parent of a resident stepped in this issue was taken more seriously, and despite the efforts made, the problem is ongoing.

The four girls said moving back and forth was difficult and their new living space put them on edge.

“I walked in and there were dead spiders everywhere… But I saw one crawling and so I bought poison and sprayed every corner and inch of that place,” said Diaz.