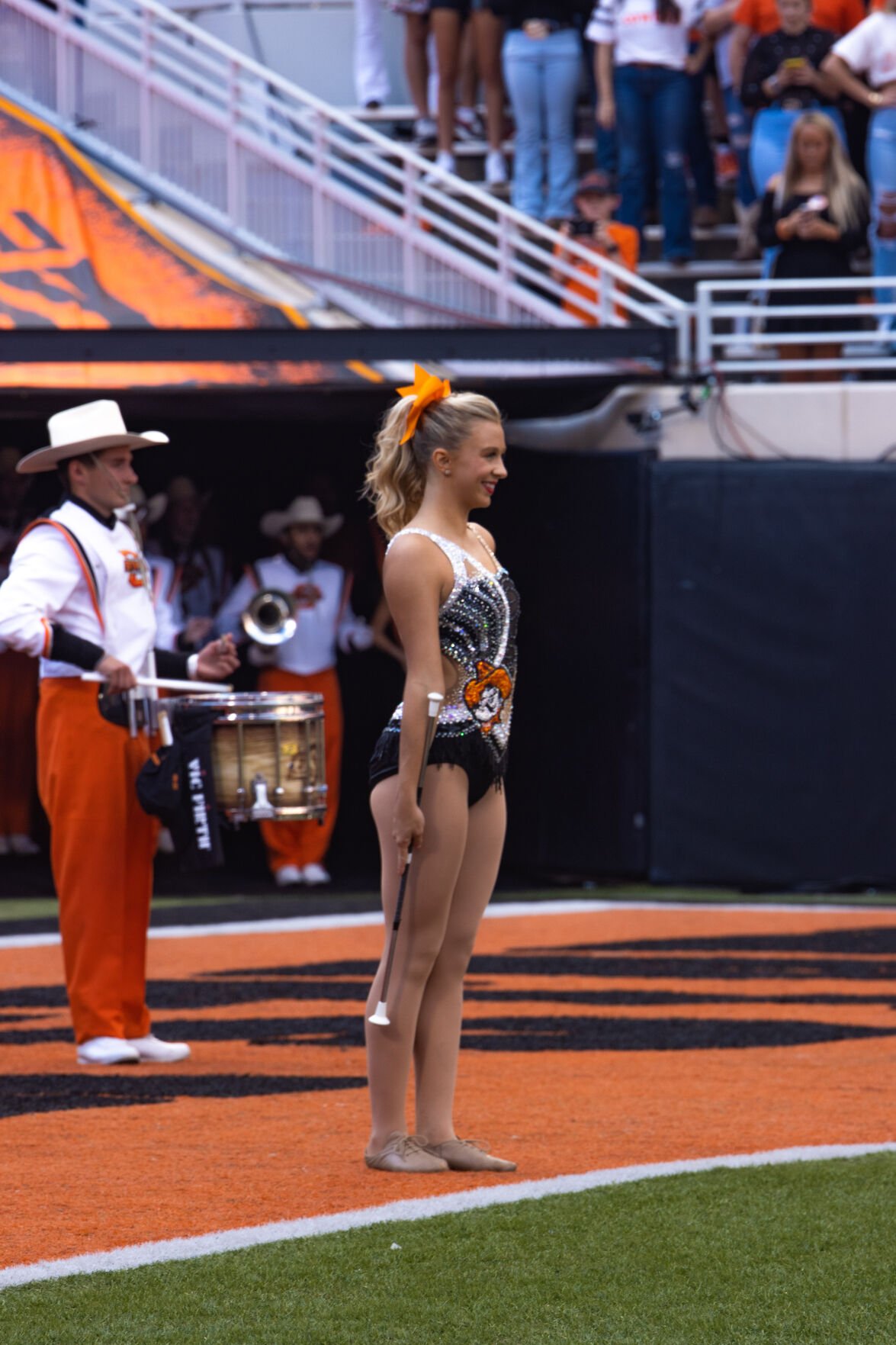 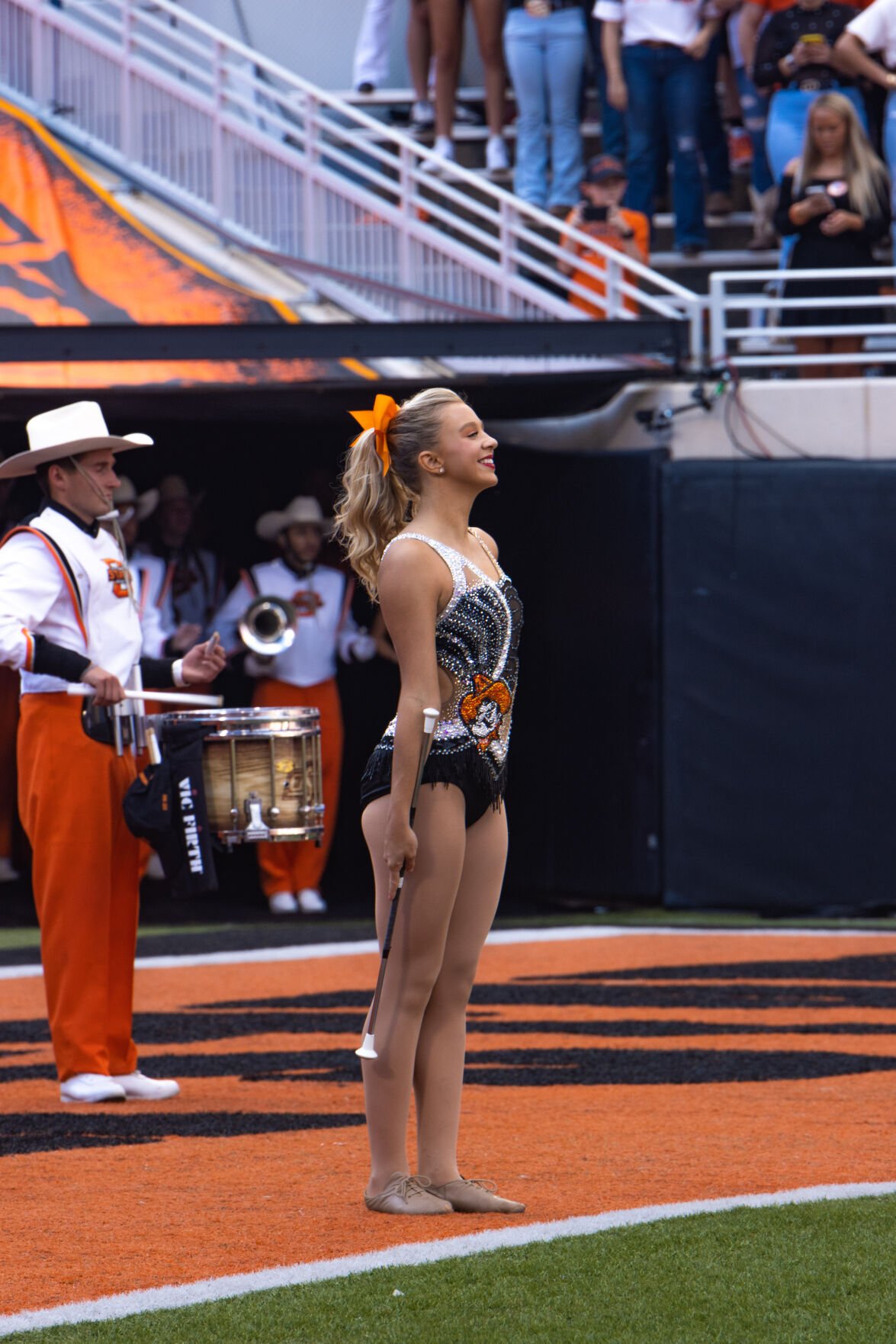 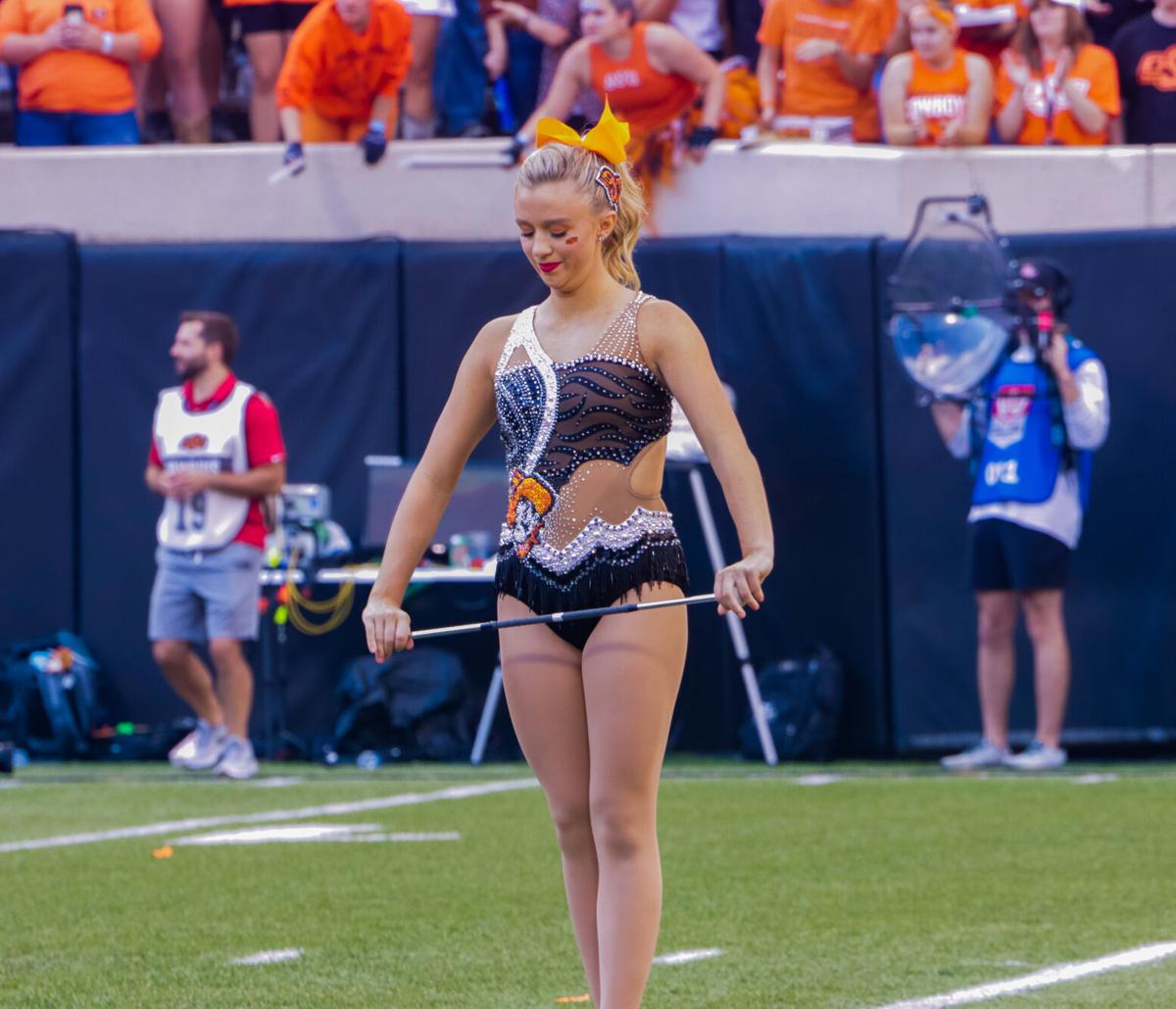 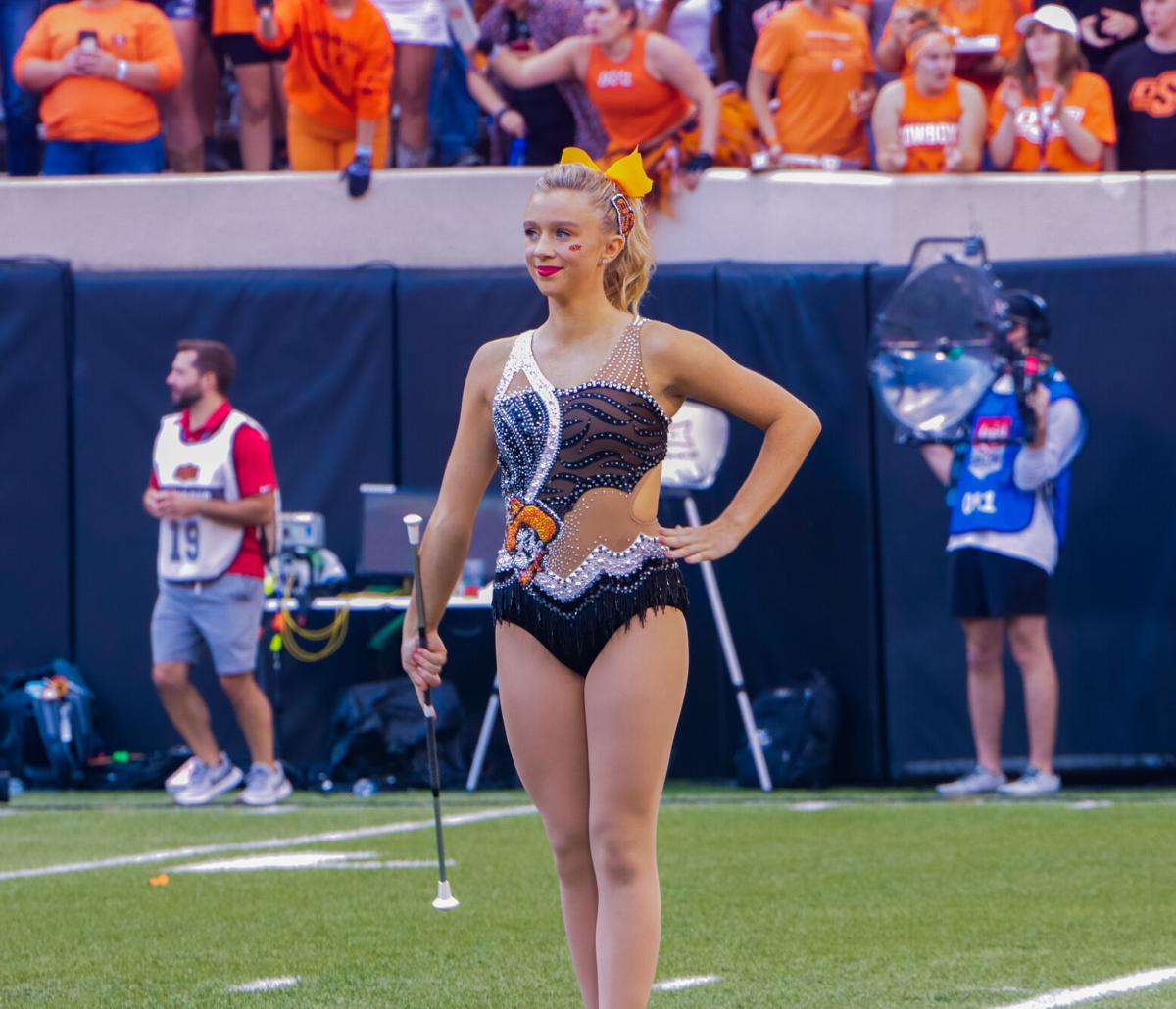 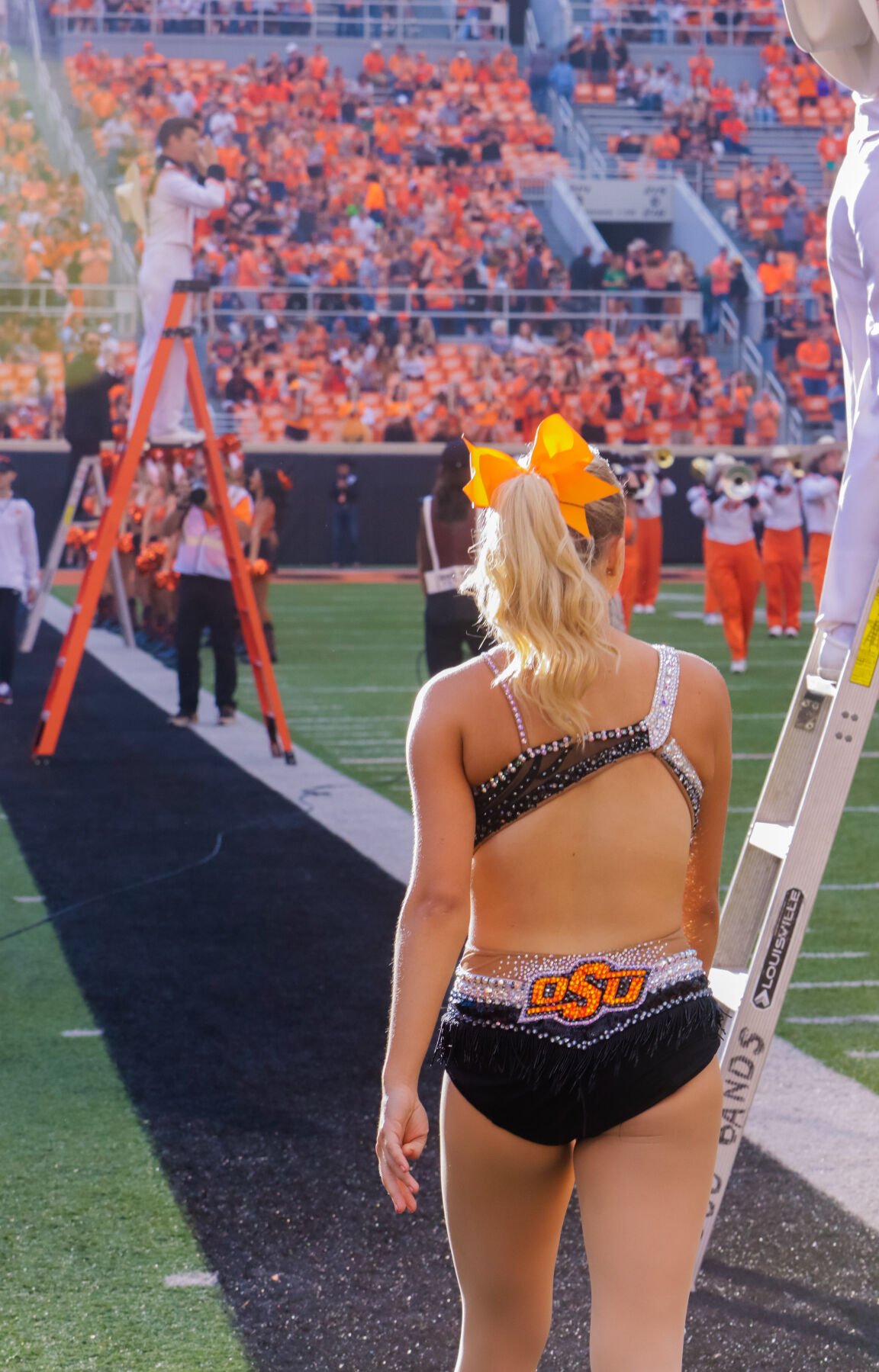 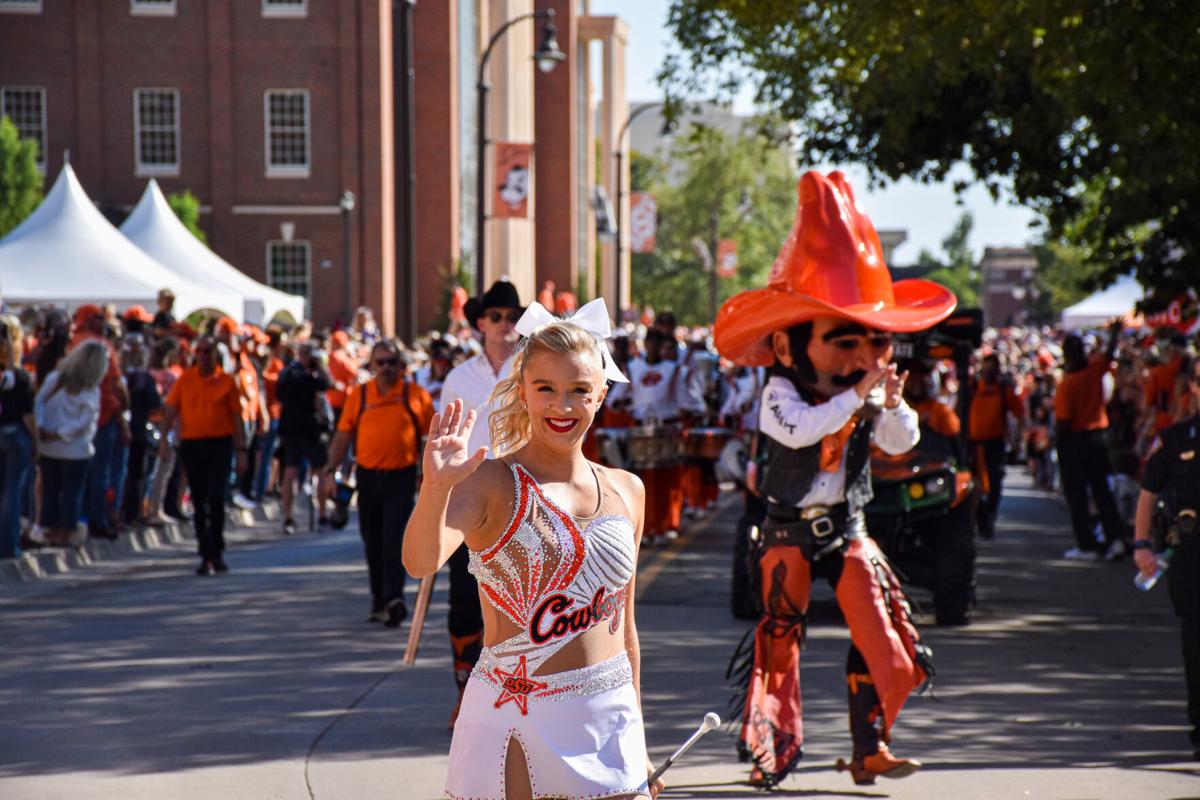 Standing in the middle of Boone Pickens Stadium, posed in a bedazzled costume and with a long, silver baton in hand, Millie Bryant grabs the audience's attention with her baton twirling skills.

Performing alongside the marching band, she leaps, jumps, twists and turns all while managing to keep the slender stick off the ground.

Bryant is a face well-known on campus, and it is hard to imagine anyone else in her position as she takes on her fourth year as the Feature Twirler for Oklahoma State’s Cowboy Marching Band. However, what most people do not know is Bryant did not start twirling until she was 13.

“I was told when I started at 13 years old that I would never be able to be a college feature twirler,” Bryant said. “It just wasn't possible. It’s very similar to dance and gymnastics in that if you don’t start early, there’s a lot of catching up to do.”

Bryant discovered twirling when she had to sit through a friend’s practice while she was in middle school. Intrigued by her friend’s activity, she picked up a baton while waiting and realized she had a natural talent.

“I didn't necessarily choose twirling, it kind of chose me,” Bryant said. “From there my mom found me a private coach and I began competing.”

The hours of lessons and competitions paid off for Bryant. The end of her high school career brought many auditions and tryouts for college twirling opportunities.

“I had offers and had talked to multiple schools that were on my radar, but OSU was not one of them,” Bryant said. “My parents pushed me to send an audition video and sure enough, I got invited for a live tryout.”

Aly Akers, a former OSU Feature Twirler and now Twirling Coordinator, said she saw the potential Bryant had for OSU, not only as a twirler but also as a genuine person.

“We held nationwide auditions and that’s how Millie was chosen,” Akers said. “Her interview and tryout were amazing, and we all knew she was the perfect fit to be the OSU Feature Twirler.”

Bryant said she felt the same connection to OSU, for she did not feel as though she was just filling an open position, but becoming an ambassador for the school.

“I am so incredibly proud of the woman Millie is becoming, and it's been so much fun watching her grow into the wonderful performer she is,” Akers said. “She is resilient, intelligent, kind, and is the embodiment of what makes a wonderful feature twirler representing a top university in the nation.”