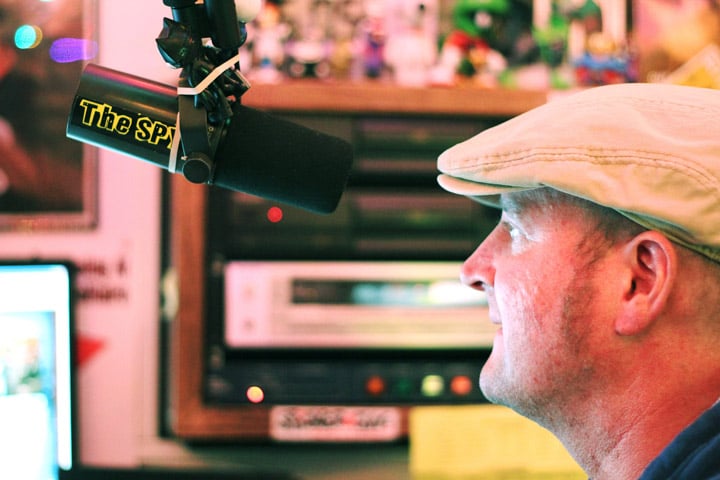 Ferris O’Brien, owner of The Spy, has been on the radio since he was 17. The Spy recently partnered with KOSU to reach a wider audience. 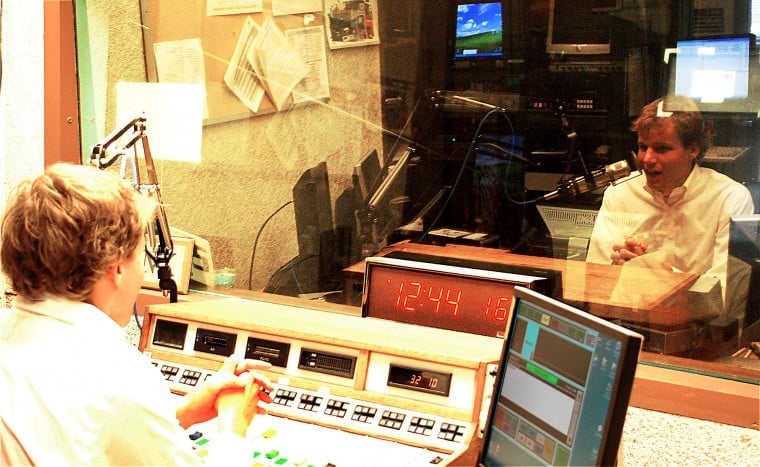 Ferris O’Brien, owner of The Spy, has been on the radio since he was 17. The Spy recently partnered with KOSU to reach a wider audience.

Sometimes in order to achieve dreams, one has to live life alternatively.

Ferris O’Brien is a prime example.

Owner of radio station The Spy FM in Oklahoma City, O’Brien lives to spread alternative music as far as he can reach.

The Spy’s recent partnership with KOSU helps his station keep connected with a wider audience.

Because of the influence from corporate stations, O’Brien hasn’t always had the success he dreamed for in distributing alternative music over the air.

It all began a couple of years ago when the Clash came crashing through the speakers of his family car.

“Man, when I first heard the Clash… That was it,” O’Brien said.

Born an only child with parents who had “weird” tastes in music, O’Brien says, “Radio was my friend.”

And after getting his first taste of alternative from the Clash, he was hooked.

“I just knew it had begun a lifelong obsession,” O’Brien said.

As time went on, O’Brien began tuning into as many rock specials on the radio as possible and found his first idol, George Gimarc, a legendary American disc jockey.

“I worshipped him, and he was an incredibly influence on me,” O’Brien said.

Upon discovering alternative music as well as an inspiration, O’Brien decided he wanted to be a rock star.

While he may have been 17 years old and attending the University of Oklahoma, O’Brien knew he wanted more.

Soon, a friend recommended that he go into radio.

“I had never really considered it before, but once she told me about The Edge I was sold,” O’Brien said.

The Edge was an alternative radio station O’Brien said he knew he would love to be a part of.

A slight problem arose because The Edge was in Dallas. However, O’Brien didn’t let that stop him the day he received a call for an interview, which lead to a job.

That meant balancing school and a job that were separated by states.

“I managed to switch my schedule to go to school Monday through Thursday, and then drive to Dallas Thursday nights and work until late Sunday,” O’Brien said.

The packed schedule was paying off, though. O’Brien eventually landed his own on-air show on Sundays, and after about 18 months, The Edge officially hired him.

The surprises kept coming, as O’Brien’s childhood idol George Gimarc wound up one of his bosses.

Although many of his dreams were coming true, O’Brien was forced to switch from station to station as corporate stations began buying up all the small alternative stations.

“I never was a market climber, I just wanted to be happy and fulfilled,” O’Brien said.

After working at multiple stations, O’Brien received a call from the original general manager of the Spy.

“He said he needed me, so I met him for lunch and we developed the beginnings of the Spy,” O’Brien said. “While much had been torn apart, there were remnants of greatness there, it was just in a bit of chaos.”

He moved to Stillwater to take over the Spy project, and he said he never regretted it.

“Those years in Stillwater, the people I met, things I did… They were the best times of my life,” O’Brien said.

He took everything he had learned at his first alternative station, the Edge, and morphed it to fit the Spy.

“I think we did some incredible things at the Spy then. Even K-Rock in Los Angeles was watching us,” O’Brien said.

However, as great things do, the Spy’s free days came to an end as a big company took it over.

O’Brien weaseled his way into playing independent airshows during the day and evening on the new station, but he wasn’t quite fulfilled.

Lucky for him, Oklahoma City wasn’t fulfilled either.

He received a call from radio managers in Oklahoma City who wanted the original Spy back, and as OKC was already the city with the biggest population of Spy listeners, O’Brien agreed to return.

Once again, O’Brien’s days of playing “true alternative” came to an end with Clear Channel stations taking over.

“True alternative is the shit nobody else plays; it goes deep, and you play so much. That’s what I wanted to do,” O’Brien said.

Luckily, the Katt in Oklahoma City gave O’Brien his own specialty Spy show, which scored him a nomination for seven Plug Awards over a span of eight years.

Although the awards were nice, O’Brien knew he still wasn’t in the perfect place.

“I wasn’t getting any younger, and yet I still didn’t have exactly what I wanted,” O’Brien said.

Therefore, he attempted to buy 105.3 to begin an independent Spy channel.

“I had a station with a great staff, and I eventually noticed that about 90 percent of our listeners weren’t listening on the FM channel,” O’Brien said.

Although it was a risky move, O’Brien found a way to sneak the Spy to an online channel.

The risk wound up worth it, and the Spy’s audience tripled.

The employees at the Spy also seemed to enjoy the change, and O’Brien explains that his disc jockeys’ passion for the microphone is what keeps the shows coming.

“That’s what it’s all about; their passion for the mic translates to the audience,” O’Brien said.

The Spy also works with local hospitals and pet adoption centers to keep its audience aware and involved.

The station, which has more then 90,000 weekly listeners and an array of DJs, will be added to KOSU’s agenda in order to implement more local content in Stillwater radio.

“The Spy’s my baby. It’s been a part of me for over half of my life,” O’Brien said. “Stillwater was its original home, and in a way, this is our homecoming.”