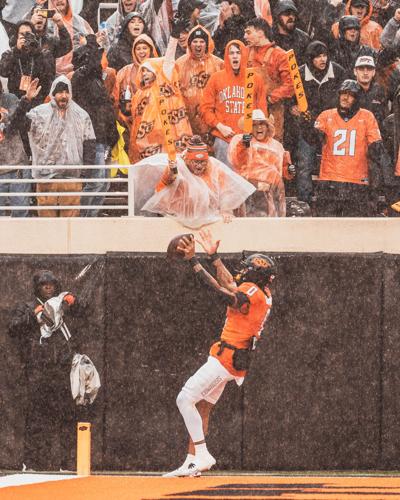 OSU freshman running back Ollie Gordon recorded 136 rushing yards in Saturday's loss to West Virginia — the most from any OSU running back this season. 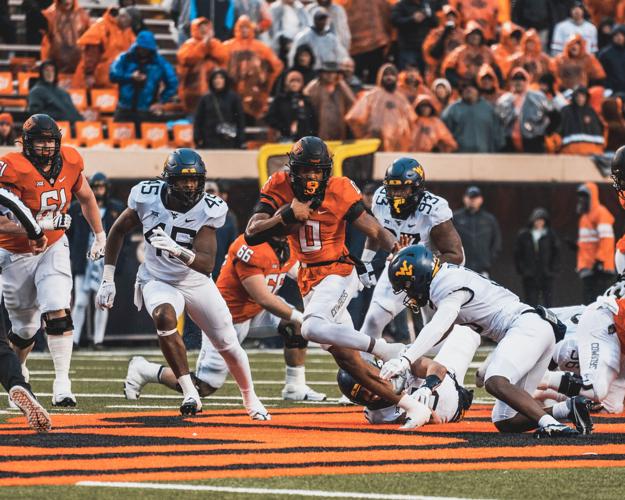 OSU freshman running back Ollie Gordon recorded 136 rushing yards in Saturday's loss to West Virginia — the most from any OSU running back this season.

Ollie Gordon hesitated and shielded his body behind a massive offensive lineman.

Gordon switched direction to his right, juked and performed a feat OSU hasn’t done much of this season.

He dodged opponents and logged a lengthy touchdown run. But his rushing contributions weren’t enough. Improvement proved too late.

West Virginia gashed the Cowboys with explosive runs to win 24-19 on a soggy afternoon in Boone Pickens Stadium.

Gordon, though, kept the Cowboys in contention with his 23-yard scamper in the third quarter. He provided OSU with his first run longer than 20 yards against an FBS opponent. His 136 rushing yards became a single game team high this season.

In a season where coach Mike Gundy and his coordinators preached rushing improvement, the Cowboys found some.

“In fact, probably the best rushing game we’ve had all year or a long time.” Gundy said.

OSU didn’t have a rusher log more than 75 yards in a game since week two. Until Saturday.

OSU found rushing improvement in its regular season finale against a non-bowl eligible team. Not when it was needed most in early season Big 12 battles.

Redshirt freshman Deondre Jackson added runs that moved the chains. He dashed for 22 yards into Mountaineer territory. That run gave the Cowboys multiple runs of more than 20 yards this season for the first time against an FBS opponent.

“We blocked it all up and it gave the running backs chances to get out on the edge a little bit and run,” Dunn said. “I thought we did a good job of tailbacking when we were in space of running people over and falling forward.”

Dunn added that the mid-sized gains allowed for run calls on second down. It’s what the Cowboys did.

The Cowboys stuck with the passing game in many situations this season. A result of unproductive rushing. Saturday seemed different. Passing lacked and rushing didn’t. No passing touchdowns scored from either side. An opposite story for OSU’s offense. A lack of complementary football.

“(Rushing is) something we’ve been lacking on so it was really good to get some motion going,” wide receiver Braydon Johnson said.

But the Cowboys still failed in the ultimate statistic. They didn’t win.

“We gave ourselves chances by not running for one or two or minus one or two,” Dunn said. “I think that was the difference.”